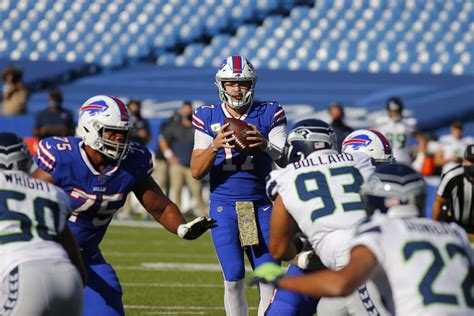 A match between these two was always going to be entertaining and it was as the Buffalo Bills beat the Seattle Seahawks 44 to 34.

The Seattle Seahawks take on the Buffalo Bills during Week 9 of the 2020 NFL season. Subscribe to NFL: http://j.mp/1L0bVBu Check out our other channels: Para…

The players that showed up for the Buffalo Bills on the day Josh Allen who rallied up 415 yards, three touchdowns, it should be noted this is the second game he has done this. Tre’Davious White, Klein had key sacks and a forced fumble. Stefon Diggs present caught nine passes for 118 receiving yards. John Brown caught eight passes for 99 receiving yards.

The players that showed up for the Seattle Seahawks on the day Jamal Adams, Dunlap with five tackles, a sack and five pressures.

Andre Roberts of the Bills started strong with 60 yard return to the Seahawks’ 45-yard line. Three plays later and the Buffalo Bills were in the end zone thanks to receiver Isaiah McKenzie.

Buffalo were now at 7, while Seattle were at 0.

Seattle fizzled out on its first drive.

The Seahawks struggled to make any headway as he was picked off by Bills’ safety Jordan Poyer in the end zone.

The Seahawks were finally able to stall the wonder kid Josh Allen with some key sacks. Rookie kicker Tyler Bass did not disappoint kicking a 44-yard field goal.

A stroke of luck swung Seahawks way as the Buffalo Bills cornerback Tre’Davious White was called for pass interference. Wilson got busy with 41 yard pass to D.J. Metcalf and 11 yard to Tyler Lockett.

Wilson rushed it in himself and put them on the scoreboard.

Allen faked a run then threw to Davis for a touchdown.

Wilson tried to rush down the field with haste before the halftime. But on fourth down, they decided to just take a safe bet. Kicker Jason Myers came on and made a 45-yard field goal. It was now Buffalo at 24 with Seattle at 10.

Wilson failed to capitalize on the fresh start and had to turnover as the Buffalo Bills defense kept up the pressure. Defensive end Jerry Hughes strip sacked Wilson allowing White to recover.

The Seattle defense was starting to get into a better rhythm and forced the Bills to kick.

Wilson finally got used to the defense and started dissecting them getting a touchdown after connecting passes to the end of the field.

Buffalo’s offense got stifled, they punted. Wilson started strong, a 26-yard pass to tight end Will Dissly, but the Bills made his life difficult and they kicked again.

Josh Allen struggled to get the ball down field as the Seattle made it as hard as possible with constant sacks. They still got the touchdown thanks to Moss rushing it in.

The Buffalo Bills were at 34 with Seattle at 20. Wilson got picked off by White on the next possession.

Allen got the touchdown himself after the turnover.

Seattle answered with a storm of a drive. In the end David Moore brought it into the end zone.

Buffalo punted again after a stalled drive. It did not matter though as they forced another turnover to get the ball back thanks to Linebacker A.J. Klein who strip sacked Wilson.

Tyler Bass made a 31-yard field goal after a stalled drive and the situation looked bleak for the Seahawks. The Seahawks tried to rush for a touchdown and seven plays later Metcalf got the touchdown to make the loss seem respectable somewhat.

Why The Buffalo Bills Won

Josh Allen had the day before this match learned his grandmother, Patricia Allen, had died unexpectedly at the age of 80.

Sean McDermott called to offer condolences. “He said he wanted to play,” Sean McDermott said. “We just felt like he was going to have to compartmentalize for the better part of 24 hours in order to get through the game and that’s what he did, and then it was emotional after the game. Not an easy thing to play through.”

To handle that pressure and still win showed Josh Allen has the mentality to be great.

His teammates think the same. “Josh is a soldier,” said left tackle Dion Dawkins. “He’s a battler and he has the will of a champion. Every time Josh touches that .eld, he lays it all on the line every play. He’s a leader. He’s our leader.”

That being said we also offer our condolences and hope Josh Allen is doing better.

The Buffalo defense has an interesting philosophy on execution of their play. Wallace said that the Bills were seeking to score point from turnovers.

“We have a goal on defense that we want to score as much as possible, try to get 10 for the season,” he said. “So, we haven’t started yet, but I can see we’re getting close.”

Buffalo created four turnovers: a Jordan Poyer interception in the end zone, a pick returned to Seattle’s three-yard line, and a pair of fumbles forced by Jerry Hughes and A.J. Klein.

It can be said their aggressive style worked as the 10 points Seahawks had at the half was their second-lowest output of the season. That is quite an accomplishment.

Josh Allen also has a lot of variety in the receiving core. Tyler Kroft, Gabriel Davis, Zack Moss, and Isaiah McKenzie all scored. He can pass to almost anyone and carry them to victory. Not an easy feat for most quarterbacks.

The Buffalo Bill’s next opponent is the Arizona Cardinals. The Cardinals are on a three-game winning streak and hope to extend it.

Why the Seattle Seahawks Lost?

Russell Wilson is known to be a good out of pocket passer, but when you have a secondary coverage sack your offense so well the only recourse is to rush it yourself. The Buffalo Bills did not allow that by making sure to chase him not only out of the pocket, but into traps where they can take the ball if not sack him.

Wilson did not get much help from his offensive line and it was not like they had a rusher who could make mincemeat out of their defense like a Lynch.

They only had their passing options Tyler, Moore, Metcalf, which are good, but not great.

The Seattle defense is another thing entirely. Even though they improved in the 49ers victory, only allowing 112 yards in the first three quarters, they were going up against a true passing superman in Josh Allen and they failed that test with an below average grade.

It was bad, but not awful. It could have been better though. Regardless, their first terrible outings in the season have punctuated how low they can be. Seattle is still on path to break the season record for yards allowed in a season.

Carrol’s solution, patience, in the secondary, the starting four have only played just one game together: The season opener against Atlanta.

The thing is that seems uncertain. Cornerback Shaquill Griffin is currently out. His backup, Quinton Dunbar is struggling with on and off injuries.

That and he has not played well as of late. Dunbar gave up seven receptions on eight targets for 99 yards and a touchdown.

Carroll still has faith he will learn to play the system they have there in Seattle and improve. Time will tell, but if Carroll believes it, we can wait, there is a lot of football to be played yet.

Did Biden just admit to violating the Logan Act?