Note: this is an opinion piece and may not reflect our site as a whole. 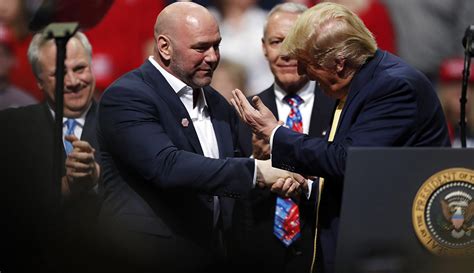 That has not changed much since the loss that Donald Trump suffered at the electoral polls.

Dana White has not commented much on the situation, but naturally people would ask. They were very close after all.

The joke about Biden not knowing who he is, is in reference to his ‘Sleepy Joe’ nickname. Biden has been condemned for his foggy memory hence the nickname dubbed to him from the Trump administration.

Dana White’s uncaring reaction might be true, UFC is a sport, but not a glamorous enough scapegoat in any political sphere. So it is unlikely Joe Biden will go after Dana beyond raised taxes. The thing though is everyone will suffer that, so that will not be targeting per say.

Besides that, the democrats need to show that united front, equality and fairness, at least try to.

To go after Dana White and other Conservative friends of Donald Trump would make the democrats look hypocritical.

Nothing much will change and the friendship will still be strong throughout.

UFC President Dana White had drumed up support for the Donald Trump in the 2016 and 2020 elections. Several fighters in the organization have pledge support in the prior months.

Unlike other sports which try to remain neutral, Dana White has brought the sport more and/or less as an army of Trump during his presidency.

This never seemed weird. Mostly because of the nature of the UFC business, stories are important to how fights are marketed. The wilder the story, the more eyes the fight will garner. It is an old tactic used by the NFL, boxing to good success.

Dana White would be a fool not to know the demographic of his own sport and know they mostly lean conservative. So did he just use Trump? No, but it can be said it benefited him being Trump’s supporter.

In talking about politics, a former UFC fighter and current Hall of Famer is now serving in politics.

Tito Ortiz got recently elected to the city council in his hometown of Huntington Beach, California. Ortiz and Dana White have had their issues, so much so they wanted to fight each other to hash out said issues the MMA way.

Tito Ortiz likened himself to Dana White’s ex-girlfriend and called him a slave driver for his business style, while the Dana White has insulted his intelligence often. They seemed to have had a ceasefire after the text Dana White sent to his girlfriend

It seems time cures all. White said, “Good for him. Good for him.” That indicated Dana White is focused on business and especially with a new commander in chief about to step in. The promotion has to prepare for the future.

Right now, fights are not happening in the United States and Biden has a huge task ahead of him in the virus pandemic which he will have to deal with if American businesses are to return to normalcy as swiftly as possible

Dana White and Joe Biden may disagree on many things, but they can both agree that America is suffering right now, because of the pandemic. The sooner businesses open up back the better the health of the country.

The Buffalo Bills Get The Bragging Rights Over The Seattle Seahawks