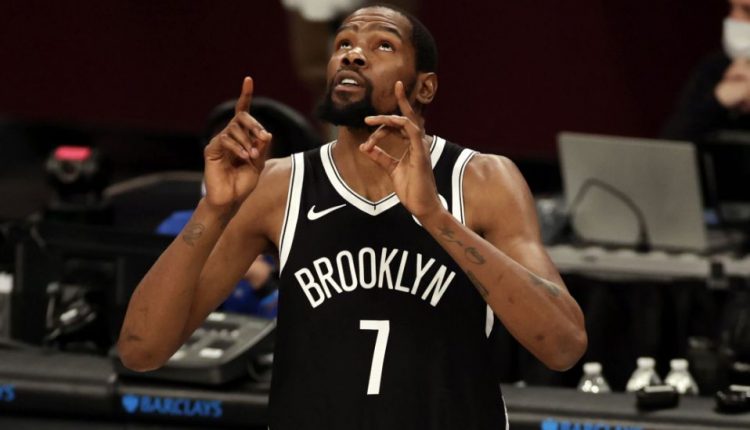 It was once upon a time when the Knicks were on top of the eastern conference and the Nets were bumbling around. Now, the Nets are looking like future champions and the Knicks are struggling.

Kevin Durant proved that with an enlightening performance putting up 26 points in a thrilling win over the Knicks. They Knicks lost out 109 to the Nets 116.

They did this while a massive trade was being orchestrated behind the scenes to get James Harden into the building.

The Nets did well defensively and offensively. Kevin Durant led the team, with 26 points, three rebounds, and six assists. He set a franchise record with 9 consecutive 20-point games. Bruce Brown did well on the defensive side of the ball putting up 15 points, 14 rebounds, two assists.

Landry Shamet tried to make his claim to get more playing time as he had 13 points, one rebound and five assists.

“Love what Reggie brought today,” said Kevin Durant. “You got a dog over there. With Julius Randle, we just told him to guard up. You not gonna send too much help, and I think he did a solid job just putting a body in front of him. Also rebounding the ball and finishing around the rim. Reggie plays like a seasoned vet it seems like. He’s still learning every single day, but he has that toughness that’s gonna allow him to make plays on the floor.”

Since we are talking, Julius Randle finished with 30 points, seven rebounds, and five assists.

As far as the rivalry, DeAnde Jordan said they are thinking of the championship not ‘winning New York’.

Though, Durant disagreed and even took a shot at the Knick’s by mentioning how empty their stadium was.

The Nets are kicking to continue the good times with a win over the Orlando Magic on Saturday, January 16, 6 PM, YES Network.

James Harden is headed to the Brooklyn Nets, currently a strong team with a lot of weapons and injuries to boot. The trade moved Caris LeVert to Indiana. Jarrett Allen and Taurean Prince to Cleveland. Rodions Kurucs to Houston.

James Harden averaged 29.6 points over 621 games. He is an elite scorer.

Kyrie Irving is soon to return; old teammate Kevin Durant and James Harden make a dominant trio that will tear up the league in the coming weeks. They are easily the highest scorers in the league and can rival any big three that came before them. It should be noted the NBA has not approved the trade and it was quite a monstrous and complex one.

But assuming it will be approved, the question remands how did this trade happen?

One post-match interview, it was after the 117-100 defeat at the hands of the Los Angeles Lakers. Harden made his feelings clear. “I love this city. I literally have done everything that I can. The situation is crazy, it is something that I do not think can be fixed. So, yeah. Thanks.”

Then they told him not to come to training the next day and it seemed the Rockets had enough. Both players and staff, 76ers tried to come to their rescue.

Philadelphia 76ers were considered favorites. Ben Simmons was reportedly put up for trade until the Nets swooped in with a better offer.

The Future of the Nets Franchise

A few fans were surprised that this trade occurred. Some were concerned seeing regular members being carted off to get the capital needed to get Harden on the team. The Nets have a good defense, all around great teamwork, but Nash probably realized with injuries piling up. He needed an edge or in this case another shooter. If you cannot stop them, outscore them is the plan.

The Rockets never reached the NBA Finals with Harden and that made Harden feel like he was wasting his talent with the Rockets.

The Nets play like a team though, a well-organized one. Harden will need to transition from his one wolf, isolation skill set to a team oriented one.  So, it is a question of can he put aside his ego to just chase the title not the numbers?

Can he play more off the ball and become the teammate they want him to be?

More than that, their batch of reserves is lesser now. With injuries piling up right now, they have less to work with, so making the best out of the talent they have will be paramount.

Harden will have to travel to Brooklyn and quarantine.

As for the Houston Rockets, they lost a huge superstar in Harden, but they did not get players so much they got picks. Are you a gambling man? These picks could lead to a new star for them or a dud that does not live up to the billing.

They also have a lot more cap space with his contract off their books. The Houston Rockets need to make smart decisions on building their team, especially since the west is weak now with only the Lakers looking like contenders.

They can build into something great if they use their picks right.  What do you think of the trade, will the Nets get the big three working seamlessly or will it fall apart?

Why RealNSE.com was taken down today