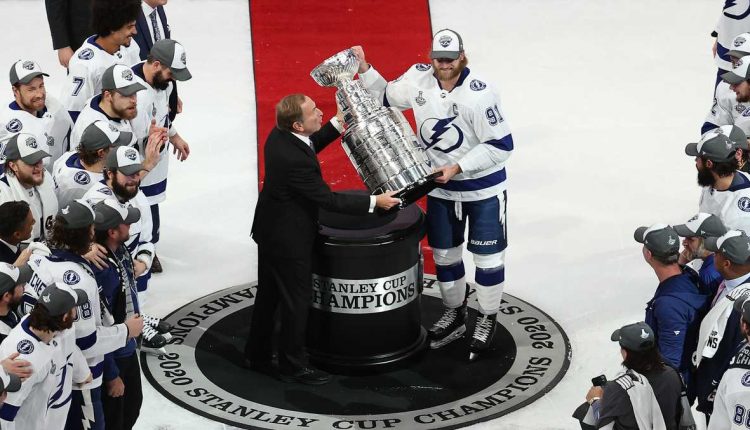 The Tampa Bay Lightening did it. Game 6, they won 2-0 against Dallas on Monday night in Edmonton, Alberta.

The Lightning raised the Cup for the second time. They won before in 2004. Lightning’s Hedman won the postseason MVP award, which was well deserved.

“Obviously, we can go back and look at what’s going on in the world now,” said Maroon, who won the Cup last year with St. Louis. “I think a lot of us are going to sit back and talk about this one a lot, because this one was a special one, and a hard one to win.”

The Lightning returned home and were greeted by family members and hundreds of fans.

“To finally be here and enjoy it, it’s awesome,” Killorn said. “It’s kind of surreal right now, to be honest.”

They were then taken to Amalie Arena for a private on-ice celebration.

Stamkos had thanked the families for the 60 days of patience they exercised, while the team was in the NHL’s bubble.

A fan rally and boat parade occurred on the Hillsborough River then they went to Raymond James Stadium to finish their celebrations.

They have come from a long process of team building from 2015. Majority of the core back then is still here now.

And they did not disappoint when playing on the ice. The Lightning always won the next match and had some great comebacks. Their was also the crushing victories like the 8-2 and 7-1 routs over Boston and the Islanders, respectively.

Maroon and defenseman Kevin Shattenkirk were brought in from free-agency and impressed.

The Lightning finished second in the Atlantic Division with a record of 43-21-6.

Shattenkirk praised coach Jon Cooper for believing in the team in the end as they did have a shaky start at the start of the season. “I think his patience was probably the best characteristic,” Shattenkirk said earlier this month. “He showed throughout the whole way in believing in our team and believing in the guys we had in the locker room.”

The boat parade kicked off Wednesday. The festivities grew to around 15,000 attending at the Buccaneer’s stadium. The boarded boats for a parade went down the Hillsborough River, but the rally started late due to all the fun happening on the river.

“There will be no asterisk next to the Stanley Cup Championship,” Greg Wolf told a Raymond James Stadium crowd of about 15,000 at the stadium. The fans were cheering and they loved it. They danced to the music of the in-stadium DJ emphatically.

It was a great final and all round a good party to end their stellar season.

Week Three in the NFL and a Lot to Talk About