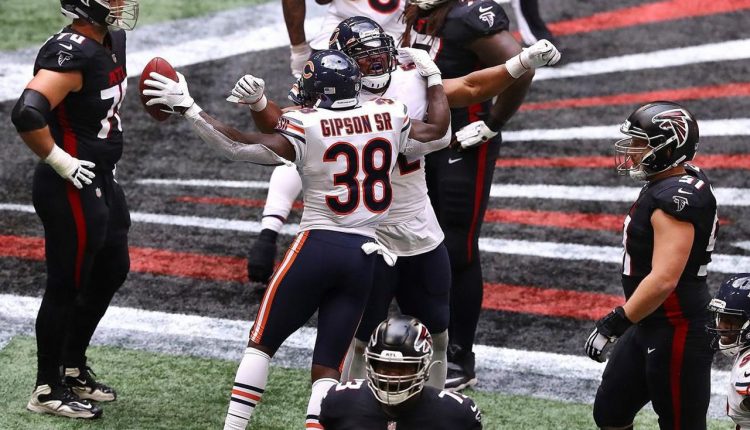 Week 3 in the NFL was an entertaining week. The Falcons lost another double-digit lead. The Texans are still winless. The Chiefs held Ravens to the fire and burnt them on the field and the Lions finally got a win in the waning seconds.

Lamar Jackson failed all night to get those juicy deep balls down field thanks to the Raven secondary. Devin Duvernay had 93 yards return Touchdown to give the Ravens a chance, but the secondary of the Chiefs crushed the hope of that drive and the match.

Josh Allen was amazing and he and the Bills are looking like a likely threat for the postseason. He threw for 311 yards, 4 touchdowns, rushed for one himself.

The Rams almost came back from behind, but Josh Allen finished the job as was his duty.

They faced a 25-point deficit early in the third quarter. The defense struggled in the first, but they came together and forced two turnovers and scored touchdowns on four consecutive possessions to take a 32-28 lead before Josh Allen put that nail in the coffin.

The Raiders team can reach the red zone, but they could not finish it. Out of five times, they crossed the end zone twice.

Sony Michel helped the Patriots by rushing for 117 yards. It is likely Sony Michel will keep the job when Damien Harris returns from injured reserve this week.

Cam Newton threw an interception, but Raiders did more harm to themselves with two turnovers.

The Titans and the Vikings had a swinging match. They are evenly matched.

Vikings defense struggled even against an attack that was not highly rated. Their defense gave up more than 450 yards against the Titans.

Dalvin Cook rushed for 181 yards and rookie receiver Justin Jefferson had 175 receiving yards for the Vikings, so their attack has gotten some spark restored to them. They will need it next week against the Texans.

The Steelers moved to 3-0 for the first time in a decade.

Deshaun Watson got sacked five times, but it was not enough. The Steelers rushed for 169 yards on 38 carries. The Texans cannot rely on only T.J.Watt because theVikings have a good offense even if they have no defense. It is looking more likely for the Vikings to win.

The injury-ravaged Niners entered the game missing nine starters and they not only won. They crushed the Giants. Led by their backup quarterback, Nick Mullens, their backup running back, Jerick McKinnon and a rookie receiver Brandon Aiyuk they racked up 343 yards, with 77 yards rushing.

QB Daniel Jones for the Giants had six turnovers in 12 quarters.

“Those are costly mistakes,” Jones said. “Certainly need to correct.” The fumble in the first quarter, Jones now has 20 fumbles in his first 16 career games. The only player with more is Tony Banks. Not a flattering comparision.

Mitchell Trubisky was benched for Nick Foles in this game after two-and-a-half quarters. The rest is history.

Foles led the Bears to a shocking 30-26 win in Atlanta. With the Bears trailing 26-10 in the third quarter, Foles went a combined 9 of 12 for 119 yards and three touchdowns. Coach Dan Quinn however appears to be on the verge of being fired, although he avoided talking about his job status postgame. Coupled with a Week 2 loss at Dallas in which the Falcons blew a 39-24 fourth-quarter lead.

The Browns trailed Washington 20-17 in the fourth quarter. Then Haskins threw three interceptions, but he also lost a fumble and the defense stepped up big time to pull off this miracle.

Nick Chubb helped the beating of Washington with 108 yards and 2 touchdowns.

The Browns were last above .500 going into Week 15 of the 2014 season. So, things are going well, hopefully they stay on track to keep winning.

Haskins needs to start showing more consistency. He did start strong, but he fell apart when his team needed him the most.

Bengals rookie Joe Burrow showed he is an exceptional quarterback. Burrow fought tooth and nail keep the team afloat to tie. Cincinnati gave up eight sacks with its bad offensive line. Something they need to fix.

Quarterback Philip Rivers became the sixth quarterback in NFL history to throw at least 400 career touchdown passes and for 60,000 yards in this game.

T.J. Carrie followed that up with a 47-yard pick-six in the third quarter. Sam Darnold played one of his worst games as a pro, throwing three interceptions. He has struggled and he has not shown that stability from the previous season.

Teddy Bridgewater threw for 235 passing yards as they held the Chargers to 16 to 21. Mike Davis rushed for 46 yards, received for 45 yards, with a touchdown. Not bad, at least they got the job done.

Justin Herbert had an incredible opportunity in front of him. Tyrod Taylor was out for another week, all he had to do was win. But he did not, so we can guess he got his hope up for nothing.

The Seahawks defense may not be cracking, but Russel Wilson is. They’ve allowed at least 450 yards in each of the first three games, including 522 to the Cowboys. Jamal Adams is still injured along with first-round pick Jordyn Brooks. The next few weeks will be interesting to see if Russell Wilson can keep the cannons firing.

Cowboy offense needs to stop turning the ball over. “It’s three games into the season,” Dak Prescott said. “We’ll get this thing right and be proud of what we can do.”

Receivers Mike Evans and Chris Godwin on the field together for the first time this season was awlays going to be an exciting event.

Rob Gronkowski got on the ground running as they beat the Broncos handily.

The Broncos are 0-3 for the second consecutive season, but with their long list of injured people. It is forgivable. Denver are down Drew Lock, Phillip Lindsay and Courtland Sutton among others.

This victory ended an 11-game losing streak for Detroit. Matthew Stafford led two drives in the fourth quarter to come from behind.

Kyler Murray been looking impressive so far, but he could clinch this match. He had some of his worst play in the NFL.

Ryan Fitzpatrick with 160 passing yards of throwing prowess pulled the Dolphins back to the top of this mountain of a match.

The Jaguars offense struggled to get anything going without DJ Chark Jr. The defense had issues pressuring the quarterback.

Packers defense might not be as top level as we thought. New Orleans almost walked over them.

Alvin Kamara steamrolled over their defense with 197 yards. Drew Brees did well getting 288 passing yards and three touchdowns. The defense seems to be getting more aggressive, but less efficient. They got flagged for 72 and 48 yards of pass interference among three more pass interference penalties.