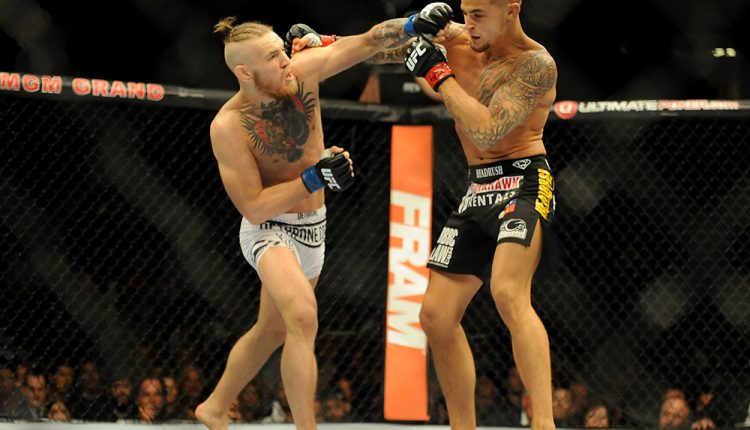 Conor McGregor and Dustin Poirier are a go to fight in a UFC bout. Conor Mcgregor does want the fight before the year’s out though. There is enough time and the anticipation should be a good build for an entertaining affair.

McGregor retired in June, so nobody expected to hear anything from him.

Then he publicly challenged Poirier

Another dusting for Dustin, incoming. #McGregorSportsandEntertainment

McGregor had originally beat Dustin in 2014. The UFC saw dollar signs and officially set a date in January 23, 2021 and hoped to stage the fight in the Dallas Cowboys’ AT&T Stadium.

The two champions desired that rematch a bit sooner, but White said that the end-of-year schedule is already set. “It’s a yes or no answer,” White said.

“I accept, Jan 23rd is on!” Dustin Poirier said on social media. “My goal is to see this fight take place in Cowboy stadium. Proper Style! Jerry Jones is a friend and the stadium can hold our crowd. I will be ready for Texas and Texas will be ready for my fans! Then Manny.” “Close to home for me on my birthday weekend! What weight?”

White changed one thing, the venue. The risk of Covid-19 very clear, he does not want to have a fight at such a massive venue. Legally and practically it will be difficult to fill the stadium with uncertainty over fan attendance.

He had said, “I’m not going into any arena where we’re going to fill a quarter of the arena or half of the arena or any of that stuff, so when crowds are ready to come back we’ll do crowds again.”

So expect the match to be elsewhere fans.

Honestly, many were surprised. McGregor some time ago said he would be coming out of retirement to fight 41-year-old boxer Manny Pacquiao. After his initial tweet about facing Pacquiao, McGregor said in a following tweet: “It will be a true honor to have faced two of the greatest boxers of the modern era.”

Ironically, the fighters were supposed to do a charity MMA exhibition in Dublin later this year. McGregor said he would donate $500,000 to the Louisianan’s “The Good Fight” nonprofit

McGregor is regarded as one of the best and took little time to make history. Five fights, two years and he challenged for a UFC championship. He won the interim featherweight, infamously went up against Nate Diaz then he won the lightweight belt.

He became the first to hold two titles at the same time. McGregor then took that spectacular boxing debut against Floyd Mayweather. He lost that match, but financially he won.

He came back for his hated rival Khabib Nurmagomedov, then lost. His last match was a win though. He is a technically gifted icon with 19 KOs in 22 wins.

The winner between Poirier and McGregor could face UFC lightweight championship Khabib Nurmagomedov.

Poirier and McGregor have both lost him, so there is history here.

White is also looking at that fight against Manny Pacquiao as he also tweeted, “Then Manny.”

I accept, Jan 23rd is on! My goal is to see this fight take place in Cowboy stadium. Proper Style! Jerry Jones is a friend and the stadium can hold our crowd. I will be ready for Texas and Texas will be ready for my fans! Then Manny. #McGregorSportsandEntertainment

Poirer spoke on this speculation on a podcast. “Look at it from his side, for sure there’s some upside there. Khabib said if him or Tony beat me that he would give them a shot at the title, so if that holds any weight, he’s looking at that. I don’t know what his ambition is. I don’t know how hungry he is to be the UFC lightweight world champion. If it is, a fight with me makes a lot of sense to get the next title shot.”

Then again McGregor might need another win to really earn that right for the title more earnestly. Will White use the boxing match to prepare for the lightweight? Unlikely, this might be a good way to keep McGregor fit. He has been out of the Octagon for a good while. McGregor did promise he would have four fights before he retired.

White will hold him to that promise we think.

Poirer was already the best contender to get that title and will naturally see this as a good progression to that match.

“Every fight is a chance or a risk, no matter how prepared you are. If you’re gonna risk something, do it with the top guy and get a title shot,” Poirier said.