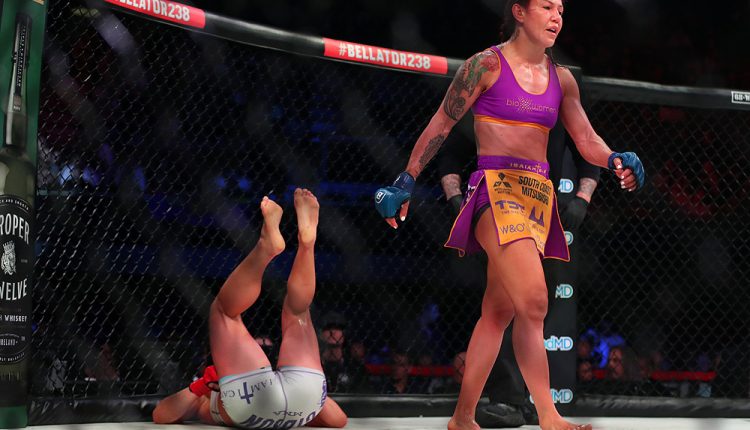 Cristiane Justino Venâncio, aka “Cris Cyborg,” has achieved so much in MMA. She had been in the UFC, Strikeforce, and Invicta. She has been champions in all those promotions. Now she is in the Bellator and is the women’s featherweight champion.

Cris Cyborg had her first defense of the world featherweight title against Arlene Blencowe in Bellator 249. Cyborg came out strong and dominated from the ver…

But now she wants to try a new sport, boxing. It has been done before. Many MMA fighters have gone to other sports, whether it be wrestling, but Chris Cyborg wants to go into boxing. Conor McGregor did it against Floyd Mayweather.

Cyborg has a 23-2 MMA, 2-0 record. Cris Cyborg had made the shift to Bellator around seven months ago.

Cris, on why she made the switch, said, “In the UFC, I had a nice time but hard times, too, making me think, ‘Maybe I’m going to retire. Maybe I’m going to take a break.’ Because there was a lot of stress outside the cage, not just inside.” She said, “And I said, ‘I really want to be happy. I love my job.’ And since signing with Bellator, it’s made me more motivated, made me dream again, and I’m happy to work with them. It’s not about odds, it’s not about games, it’s not about damage to my brand, it’s not about lies, you know.”

I am @BellatorMMA champion and it is my job to stay ready. If @ScottCoker tells @AudieAttar they would like me to fight Cat Zingano before the end of the year I will be ready👇🏾👇🏾👇🏾👇🏾👇🏾👇🏾👇🏾Full Interview: https://t.co/N4waKxOfIk pic.twitter.com/OHE57X8y9l

She added, “It’s stressful. It’s not good. Then I started fighting for (Bellator), and now I love, and I’m excited here. I’m happy, and I don’t have stress. I just train and do my best, that’s it.”

When she signed with the UFC there wasn’t even a woman’s featherweight division, only 140 lbs category.

It was difficult to make weight, and had to take drastic measures to pull this off. Her health got worse for it. “I got sick in one weight cut and I was going to fight two months later and then Dana said, ‘Ok, you don’t want to fight, cool I’m going to make the division anyways with your title fight,’ and I didn’t fight the first fight of my division because I was sick from the weight cut. But it’s nice, now they have the weight over there, cool, we made history.”

She just had her first Bellator title defense when she submitted Arlene Blencowe at Bellator 249.

“I like to have challenges. And I really want a boxing fight,” she said. “I’ve been working on a lot of boxing with Virgil Ortiz and it’s my dream to do one boxing fight if I get the opportunity. I know Scott Coker said maybe I can get one fight and I just have to continue training, continue working. If it’s going to be MMA or boxing, I’m just going to be ready.”

Katie Taylor is the one that Cyborg is looking at, plus Taylor said she liked the idea.

Cyborg might venture into the boxing world very soon. Still, she has a 15-year legacy to her name. She is thirty five right now. She is near the end of her prime. So now would be the best time for her to go into that area.

“I’m very happy, I worked very hard with my team and I worked everything,” Cyborg said. “It’s mixed martial arts and I got my first submission win of my career. Thanks to ‘Cobrinha’ (Cyborg’s jui-jitsu coach) for being with me all the time and working with me.”

She “I really like boxing. I’ve tried wrestling, I’ve tried jiu jitsu, I’ve tried Muay Thai. Always when you compete in a separate sport like this, you learn a lot.”

Cyborg does not want to start at the bottom of the hierarchy of boxing, she desires the two-weight world champion Katie Taylor. Many would complain about this, but the nature of MMA affords many fighters to have some training in boxing to some extent.

They have had a lot of experience fighting so it can be said they have been tested already. Besides, these are the fights that travel to the mainstream and tend to draw a lot of public interest, so the money talks and any promotion would love to see this fight happen.

Cyborg said, “Before I was doing lot of boxing sparring. I was sparring pro boxer Raquel Miller. I was thinking I was going to do boxing and then we were told it was MMA, so we went back to working on that.”

Naturally, even though it never happened in that McGregor fight, but many feared she might do an illegal move, a kick or go for a takedown. Cyborg dismissed suggestions about muscle memory influcing her to do that when under pressure. “For me it’s easy to separate. I really don’t have to think too much. When I’m boxing I’m focused on boxing and I don’t try to kick an opponent or anything.”

Katie Taylor is better at boxing specifically. Chris Cyborg will not have an easy time at it. If Katie Taylor tried to step into a MMA cage it will not be good for Taylor, because this would be Cyborg’s territory.

There are other prospects from Katie Taylor to consider

The question is will it be a permanent transition. Blencowe did it, she once boxed before switching to MMA where she got a 13-7. Heather Hardy, former featherweight champion in boxing.

Hardy revealed she has lost autonomy when she switched. “I notice that in boxing, I’m in charge,” she continued. “We fight when I want to fight. In MMA, it’s like ‘call 9-1-1, a dog is chasing me!’ It’s really hard from going from MMA to boxing. You’re not conditioned to punch that much. Then in MMA, you could have all these fancy plans about doing some boxing, but then you get your legs kicked out.”

There is also weight to consider.

Taylor has won a world title at 140 pounds in boxing and that was her ‘walking around weight’.

Cyborg said, “I walk around at 170 and fight at 145. I guess in boxing it would be 147 (which is welterweight) but I don’t know. She’s calling me out, she’ll have to pick a weight,” Cyborg reflected.

But Cyborg does not think she has an advantage because of her wide MMA experience and her higher fighting weight. “I always fight as a contender not as a champion. I think there’ll be lots of ways for me to finish the fight. Be it grappling or striking. But she’s a tough girl,” Cyborg said.

Conor Mcgregor and Dustin Poirier Are Finally Getting That Rematch