Nate Diaz Set to Return to the UFC3 minute read 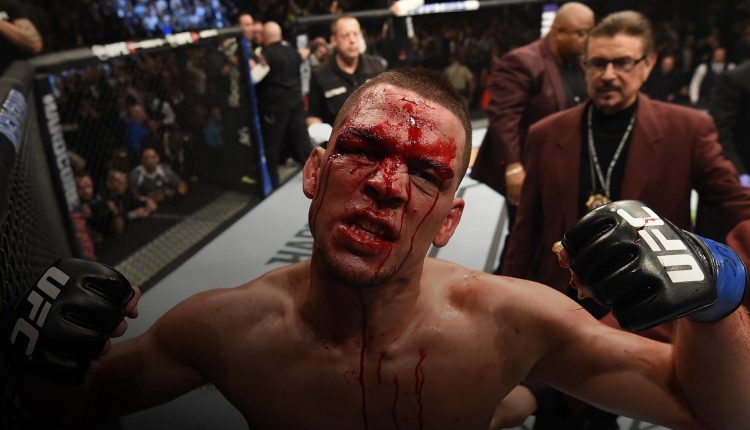 Nate Diaz has been one of the UFC’s most prolific fighters and has 20 wins to 12 losses as of speaking. Well, Dana White the negotiator worked his magic and got MMA fighting fans a present for 2021.

‘We’re working on a fight for Nate Diaz in 2021 and I think you’re gonna like it” That is what Dana White said and many fans are excited about the prospect of what this fight could be. Nate Diaz is slated to be returning to the UFC.

There is even a possibility that this will be an exciting year for the younger Diaz brother. Seems it will be an exciting family business affair. That is good for UFC’s pockets as the fans will definitely pay to see Nate Diaz return and the progress of his younger brother in the MMA fighting world.

So who will it be? It will not be former interim lightweight champion Tony Ferguson. Dana already killed that possible rumor. But he started another one, he said Diaz’s next fight will ‘put him in a really good position’ at 155 pounds. Essentially, lightweight, Diaz has not fought at lightweight since the win over Michael Johnson. That was back in 2015.

More so than that Diaz has not fought since his BMF title loss to Jorge Masvidal. This was back in 2019.

The question on who could be predicted with the fact that Dana White said it would be a good fight for opponent as well. It is probably a up and coming fighter.

To fight a veteran like Nate Diaz would be good on anyone’s resume. If Nate won, it might strengthen him for talks regarding a shot at the title.

Dana also said there will not be any chance of seeing Nate go up against Conor McGregor. Diaz had beaten McGregor in a welterweight fight at UFC 196, only to lose in a heated rematch at UFC 202.

So Dana said he will give Nate Diaz a much more competitive bout rather than trying to grab for headlines. The last thing Dana White wants is the controversial fiasco that followed that unanimous decision giving McGregor the win.

That put Nate Diaz in a bad spot and Dana seemed to have regretted that. Right now Nate Diaz is 35 years old and it can be said these are the twilight years. His best years are behind him and right now, he is fighting for pride and money.

The next opponent will be thirsting for a chance to prove themselves. It will be interesting to see who it will be and what will happen next for Nate Diaz.