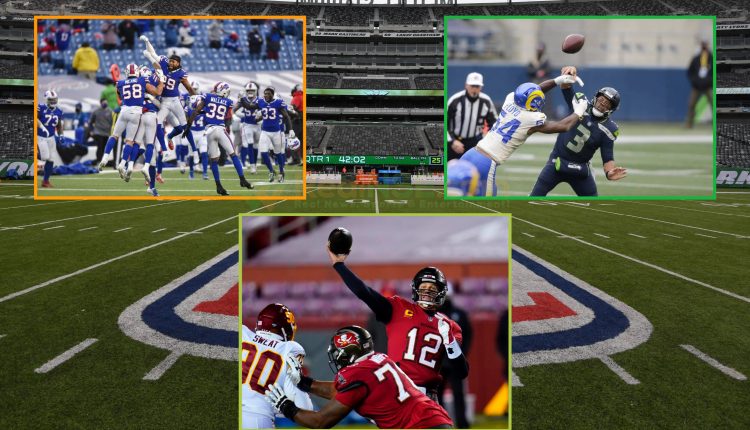 The NFL wildcard round was an entertaining battle. The first day had three battles, Bills against the Colts. Rams faced Seahawks, Buccaneers took on Washington.

The results, the Buffalo Bills defeated Indianapolis Colts 27 to 24, LA Rams kept the Seattle Seahawks at bay 30 to 20, Tampa Bay Buccaneers survived the Washington Team 31 to 23.

There were many stories from the first day. There were the chances the Colts had to overturn the deficit for the Bills. There was the Seahawk’s offense that failed miraculously to allow Rus to Cook. The Washington team’s inspired battle where Taylor Heinicke looked like a beast for a day.

In The Bills We Trust

The Indianapolis Colts take on the Buffalo Bills during Super Wild Card Weekend of the 2020 NFL postseason.Subscribe to NFL: http://j.mp/1L0bVBuCheck out our…

The Bills will now take on the Ravens in the Divisional Round.

The Washington Team Almost Had It

The Tampa Bay Buccaneers take on the Washington Football Team during Super Wild Card Weekend of the 2020 NFL postseason.Subscribe to NFL: http://j.mp/1L0bVBu…

The Tampa Bay Buccaneers and Washington Football Team was easily the best match of the wild card round.

Tom Brady was sweating for a while as Heinicke threw big play after big play. So much so that during the celebration after the rushing touchdown by Heinicke, Chase Young ran up and pointed at the back of Heinicke and mouthed ‘that’s my quarterback.’

Granted he relieved the injured Alex Smith, but many fans are looking at him as the future of the franchise. Heinicke completed 26 of 44 passes for 306 yards, 46 yards rushing, one touchdown, and one interception.

One thing of concern is how the Buccaneers struggled in the red zone. There were a lot of drops and mistakes on offence which permeated the lack of discipline and efficiency of the Buccaneers.

Brady did well regardless throwing for 381 yards, two touchdowns. Mike Evans slayed with a pertinent 119 yards receiving. Even though Heinicke was putting down touchdown after touchdown, there were almost no unanswered touchdowns as Brady made sure to respond back with one keeping their lead intact.

Washington did well at times, but that was the problem. It was at certain times, it was never a consistent pressure they applied throughout the whole game. When push came to shove, they looked average half of the game and made grand plays in the other half.

Heinicke, is 27 years old former XFL quarterback, but is definitely looking like a good option at backup.

Washington has lost its fifth consecutive postseason games, the last time they won a postseason game was against the Buccaneers. That was January 2006. They were probably hoping a second time would be in order for the team, but luck was not on the cards.

Buccaneers will take on the Saints in the Divisional Round.

The Los Angeles Rams take on the Seattle Seahawks during Super Wild Card Weekend of the 2020 NFL postseason.Subscribe to NFL: http://j.mp/1L0bVBuCheck out ou…

The Los Angeles Rams victory was a just clinic in defensive prowess. Both of the defenses were playing hard, casualties were a given. Aaron Donald was out with a rib injury. John Wolford got taken out with a potential neck injury after a tackle from Seahawk’s Jamal Adams.

He was seen after the victory, so he is likely for the divisional round. Jared Goff stepped up to the task and carried the team to victory with a struggle. Goff was sacked a lot and had to carry the team on some well-timed big plays when needed.

Russell Wilson struggled to get anything going. The corners shut down his receivers effortless and the defensive line sacked Wilson every chance they could get.

It was a defensive stalemate until three touchdowns got scored in five minutes, mostly in favor of the Rams.

All the Rams offense had to do was not make mistakes. The defense was never really affected by Donald’s absence and made sure to keep Russell from cooking up a comeback.

The Seahawks failed to convert on third downs most of the times. D.K. Metcalf had 96 receiving yards, but those were from big plays not a reflection of his catching the ball often enough to rack up that much.

In honesty, he barely got a chance. Ramsay made Metcalf have to work for those yards. Tyler Lockett did not fare any better. He had 43 yards on two catches

The Seahawks defense tried, but it was all for naught. Two sacks by defensive lineman Jarran Reed showed they were firing, but they stayed on the field the most and struggled to make as much as an impact later on in the match.

Rams will face up against the Packers in the Divisional Round.

Everything you need to about the possible second Trump impeachment