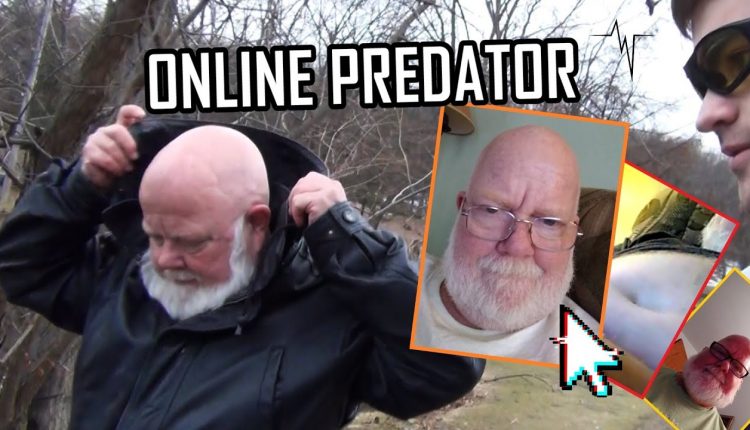 Believe it or not, predator catch videos have become a mainstay on YouTube over the last few years, and it seems like everyone feels compelled to join in on the fun.

The problem with that though is the fact that it’s extremely dangerous and sometimes helps the people they are trying to expose.

Keep in mind, that these YouTubers are finding people to pose as decoys on the phone, and then luring these predators to various spots. Once the predator initiates contact and wants to meet, the YouTuber ambushes them with a camera to ask them why they are there to meet a kid.

Trying to meet a minor girl after a sexually charged conversation, this nervous online predator gives a ridiculous excuse when confronted.My Instagram: https…

One example is a group of predator catchers that started the practice of coming to people’s houses to confront them. They even filmed a video where they met an elderly man at his house to go over his disgusting chatlogs with an underage decoy.

The host of the video constantly made fun of the elderly man which is pretty called for given what he did, but still feels tasteless. The host is really good with one-liners, making it very easy to get lost in all the fun.

And then there are other channels that don’t seem to know what the hell they are doing, and just repeat the same point over again. The host of this channel has a think accent and pretty much just looks for the gotcha question over and over again. He also has conflicts with the police frequently, blaming them for not being more vigilant

What’s most problematic about these channels though is the fact that they seem to get more joy out of gaining followers, than they do catching predators. They even go out of their way to be funny or confrontational in order to appease their viewers.

Furthermore, they don’t seem to have any boundaries at all. Now, pedophiles are the scum of the earth, but some of the videos that have been published were kind of out of bounds. There are even a few videos of people with learning disabilities getting caught, which only further blurs the line between entertainment and cruelty.

One example that seems to skew the line the most is a video where a 30-year-old person with severe disabilities is confronted by a sting operation. He tries to defend his unforgivable actions again and again, but the Youtubers just laugh in his face.

After some one-liners and running around in circles, they then have the guy call a family member, and tell them what happened. Again, the guy absolutely deserved the humiliation he received for the act, but to publish this on a social media platform where people can identify him is a little cruel. The Youtuber even leaves the guy in the rain after trying to get his license plate for the better part of an hour.

Another seemingly cruel video that was put up features a learning disabled 20 something that has polio and aids. He is confronted for wanting to meet an underage child and even seems to have knowledge that what he did was wrong.

The only real issues with that the fact that it was put online. Their lives are essentially ruined at this point, and they have to live the rest of their lives like this. Doing this to someone that is disabled seems a tad bit too cruel. It’s like putting a stigma on top of stigma.

Think about it! This doesn’t mean the person shouldn’t face action, and even a lengthy jail sentence, but why ruin the guys life by posting it? The police now know since these channels send the evidence on every case. What’s the point of posting every single catch they manage?

The worst part about this is that YouTubers who take part in this kind of work don’t seem to listen to any dissenting opinions. They seem so lost in their desire to save kids from these predators, that anyone disagreeing with their actions are pro-pedophile.

If nothing else, this is extremely dangerous thinking and needs to be addressed. A healthy community can simply not exist with the amount of divisiveness on the part of these YouTubers. You would think a goal like this would bring them together, but it rips them and their fans apart.

In the end, shaming is one thing, but ruining someone’s life is another. Trust me. The actions and the evidence should definitely be enough for these guys to hang their hats on, but they want to sit on a pile of money and gain fame while doing so instead.

And that doesn’t mean there aren’t good predator channels out there. Although I have gone out of my way to not mention predator channels, I will give a shoutout to Pop squad. They were the ones that really started this whole trend and their videos are somewhat professional.

Unlike other predator channels, Pop Squad host, Incognito, works hard to understand his subjects. He doesn’t waste his time trying to humiliate them and instead focuses on drilling the consequences into their heads. It’s a refreshing take to see, and is probably the most like Chris Hanson versus Predator that you can get.