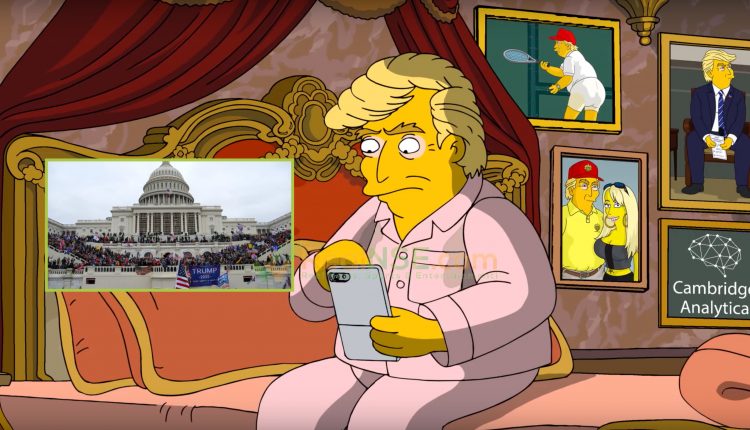 Believe it or not, the 20th-century fox show has predicted everything from the 9/11 Terrorist attacks in 2001, to Donald Trump becoming President, and might have even predicted the riot on Capitol hill. While that might sound absurd, especially since they just happened, there is a clip of the show that is eerily like what America saw play out on January 6th

Did The Simpsons predict Capitol Hill riots?Some fans think so. Halloween 2020 episode ‘Treehouse of Horror’ depicts an apocalyptic scene in Springfield on I…

The scene starts with Bart and Lisa watching another episode of Itchy and Scratchy, which is supposed to be a nod to the classic, Tom and Jerry show. The kids watch on as a man announces that a bill has been ratified into the constitution. The bill was then celebrated by shouting, doors open boys, leading to  a bunch of a cartoon characters storming the Capitol.

One walks on screen and starts randomly firing their weapon, while another one just yells gibberish with a bomb in his hand. Of course, that’s not exactly how the tragic Capitol hill riot took place on Wednesday, but it did have a lot of similarities. In fact, between the presence of a guns, bombs, and a bunch of people storming the Capitol all at once, it almost looked like a parody of the event.

Keep in mind this was the same show that predicted Lady Gaga’s Super Bowl performance, the invention of smart watches, the eventual use of video chat, and faulty voter machines. If nothing else, the Simpsons have been comically brilliant at predicting the future, and it’s starting to get a little scary that the show has this good of a record.

In the end, it could just be a coincidence, like a few others on this list, but it’s still too eerie just to ignore. Almost as hard to ignore as when Lisa showed her family a magazine that said 9/11 on it. Maybe even harder to ignore than the Simpsons successfully predicting that the NSA was spying on citizens. It’s just so creepy and so accurate that you have to wonder where they come up with this or if they know something.

Big tech is now more powerful than the US government, and some are actually happy