Big tech is now more powerful than the US government, and some are actually happy3 minute read 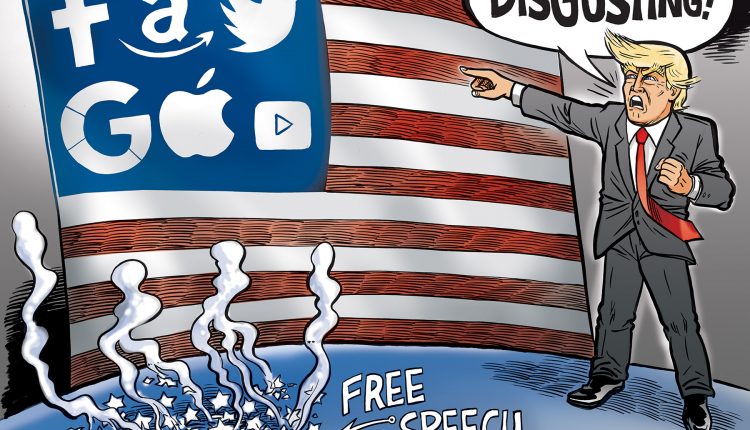 We saw last week how Twitter permanently banned The President of the United States. Preventing Trump from communicating to his over 88 million followers.

Twitter stated that two of the reasons why they banned President Trump is because he is not attending the inauguration in January 20th and that may result in civil unrest. Also Twitter doesn’t like President Trump calling his supporters “American Patriots”. Before you say “it has to be more than that,” it isn’t. Go read Twitter’s statement.

Sadly, this is being celebrated by some on the left. It blows my mind that American citizens are happy that people are literally being stripped of their first amendment.

To my friends on the left, just think about this. Not only does this mean big tech can silence ANYONE they choose for ANY reason they choose, but also this means that big tech has become more powerful than the American government. Should any company have this much power?

Fox News contributor Dan Bongino, who also has a stake in Parler, breaks down how he got the news of a possible Parler ban and reacts to Twitter banning Pres…

We’ve seen big tech target conservative and Republicans for years. When we talked about it, we were told to “build your own social network.” Well, Parler did that, Gab did that and they both have been banned from Google Play Store and the Apple App Store. Furthermore, Parler was banned from using Amazon’s servers on Sunday night. Parler is now down, if will be for several weeks according to Parler CEO.

So what are we suppose to do? I get that inciting violence is bad, and shouldn’t be tolerated. But a HUGE majority of those on the right who were banned, did nothing of the sorts.

Gab has accumulated all replies to President Trump’s tweets and archived them. The official Gab Twitter account announced this yesterday saying “For months we have been backing up every reply to Donald Trump’s tweets. We call this project the Liberal Hate Machine.”

We have over 100 million tweets collected of the very hateful people on this website making the most disgusting (and highly illegal) replies to the President and other conservatives. pic.twitter.com/43sjjJocwm

Think about it, Twitter bans the President for saying “go home” to those who performed the Capitol stunt, and calling for the arrest of anyone that broke the law at the Capitol, calls his supporters “American Patriots” and Twitter bans him. But people with left-leaning beliefs can literally call for actual violence against conservatives and Republicans but they don’t get banned.

Twitter reportedly lost 4 billion dollars in under a week since banning President Trump. I deleted my Twitter app this morning and will never send another tweet again. I encourage you to do the same, regardless of which side of the political isle you’re on.

Did the Simpsons successfully predict the Capitol hill riot?

Grizzlies and Cavaliers at it Again