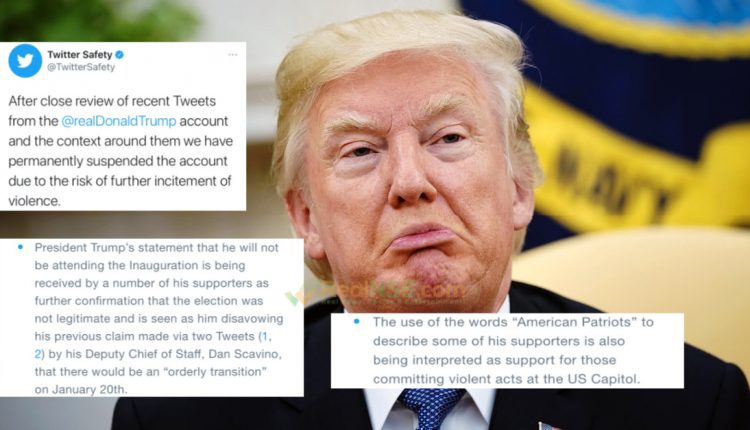 Twitter has just officially banned the President of The United States Donald Trump.

Twitter has been on a banning spree all day. Banning voices like Sidney Powell, General Flynn and many many others. They’ve even removed over 100 of my followers today.

Over there past few days President Trump has had his tweets removed and censored when commenting on the events in Washington.

Despite Trump calling for peace, for people to go home and calling for anyone who broke the law to be arrested, Twitter is claiming that the President is inciting violence.

“After close review of recent Tweets from the @realDonaldTrump account and the context around them — specifically how they are being received and interpreted on and off Twitter — we have permanently suspended the account due to the risk of further incitement of violence,” the social media platform said in a statement just released.

Twitter also sighted several tweets by President Trump that they used to make their decision. One of which is Trump saying he will not be attending the inauguration, saying it could be used to commit further civil unrest…

President Trump’s statement that he will not be attending the Inauguration is being received by a number of his supporters as further confirmation that the election was not legitimate and is seen as him disavowing his previous claim made via two Tweets (1, 2) by his Deputy Chief of Staff, Dan Scavino, that there would be an “orderly transition” on January 20th.

They also said they have an issue with him calling his supporters “American Patriots”.

The use of the words “American Patriots” to describe some of his supporters is also being interpreted as support for those committing violent acts at the US Capitol.

This is absolutely unbelievable. The President literally called for peace and for people to stop what they were doing at the Capitol and they ban him.

I will be leaving Twitter officially on January 21st. I suggest you do the same.

Big tech is now more powerful than the US government, and some are actually happy | RealNSE