Israel Adesanya vs Jan Blachowicz Is a Go4 minute read 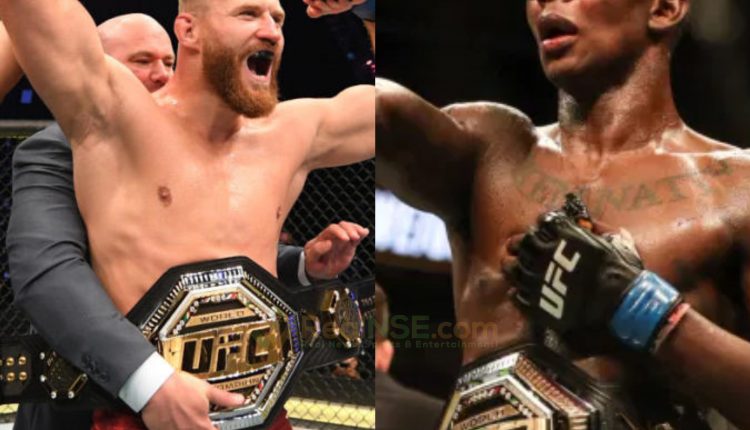 Up to this point, Adesanya who has gone 20-0 in his career has defended his belt twice

“The Last Stylebender” as he is called is happy for the fight and is fixing to put his name down in legacy.

Jan Blachowicz, the Polish international has had a more storied career with 27 wins to 8 loses. has won four straight and eight out of his last nine.

UFC president, Dana White had made statements alluding to the fight possibly happening for a long time.

Jan Blachowicz has been looking forward to this fight as he wanted to take the title and be the first to knock Adesanya out.

“Adesanya says he wants to go to 205. I am ready for everyone,” Blachowicz said. “I will be stronger, bigger, smarter in the fight. If UFC would like to do the fight I am ready. It would be a pleasure to fight and beat Adesanya and show him legendary Polish power at 205.”

The location for UFC 259 has not been decided yet, but it can be Fight Island or it can be Las Vegas.

So let us look at the fight cards happening on the epic night.

Looks like it will be an entertaining night, for the fans and the investors involved. Many have speculated some politics have been pushing this fight especially since Israel has been kicking to fight Jon Jones at some point.

Jon Jones might return, there is no solid clarification on it though. It is still merely a rumor.

The UFC does not do it often, but if it can it likes to push a narrative if it gets eyes to screen and put butts in seats. It is not as bad as boxing, who more orchestrate it. The UFC just take advantage of what they have in front of them.

Israel Adesanya is an interesting fighter with an interesting aura around him. Loved and hated, he is a weird fighter who confidently believes in his own hype and he will be sure to prove the hype is real at UFC 259.

The problems with Jan Blachowicz participating in this fight, he has not defended the title against anyone yet. He just won it and then Dana White slipped in talking about a mega match between him and Israel Adesanya.

Well, both men wanted it, but in regard to how things work, Jan Blachowicz should defend his title at least once. So goes for the old way of doing things. It is unfortunate for Glover as he wanted a title shot, but will have to wait until the hype around this fight is over and apply at a later date.

We can be happy about the prospect of another double champion and who will it be. Been a while since Conor McGregor’s days of dominance, those were truly eye opening days that fueled a lot of money for the UFC.

Miami Heat Got Their Revenge Against The Bucks

Who Will Snag a Spot in the NFL Playoffs