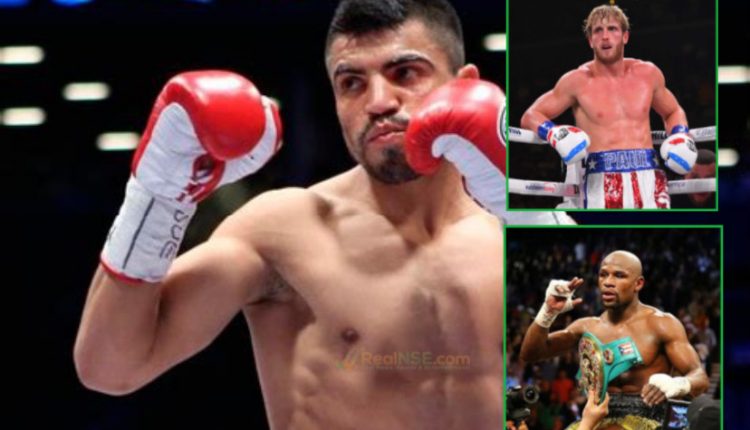 You know it’s 2020 when former professional boxer, Victor Ortiz picks Logan Paul to defeat Floyd “Money” Mayweather in their upcoming boxing match. Not only is that essentially spitting in the face of one of the best boxers to ever put on a pair of gloves, but it is also giving Paul more attention than the egomaniac deserves.

Now, that doesn’t mean Paul isn’t a genius for putting this fight together, and won’t benefit financially from it, but they are turning boxing into a freak show at this point. Furthermore, there are actually people out there, mostly his fanbase, that think Paul can defeat Floyd. Again, it’s mostly his base, but now Ortiz is joining the fray as well.

“I know what I know, and I know what I see. What I’m saying, in a sense, is that he will give Floyd trouble. He’s a dear friend, and I believe in him,” Ortiz said of Paul. “I’m telling you; it’s going to be an interesting fight. I’ve talked to him about Floyd a few times…. I give him the simple things: ‘Floyd is Floyd, but you’re unstoppable. You’re on another level.’ I strongly believe Floyd will have trouble. Logan can box, and he has power, reach speed, and he can move now.”

Seriously though. Who doesn’t find that comment disrespectful to Mayweather and his professional boxing career? Keep in mind that Mayweather is 50-0 in competition and has had 27 knockouts throughout his career. He has also come out of retirement to fight Manny Pacquiao, and Conor McGregor. Why anyone is doubting his ability in the ring with Logan Paul is beyond comprehension.

And think about what this does to a sport like boxing as a whole! Boxing used to be a sport of class, now they are just struggling to stay relevant. While Logan Paul helps boxing do that with his built in audience, it is coming at the cost of respect for the business

“[Mayweather] found a YouTuber – that sounds easy enough for a 20-time world champion,” said Ortiz during an interview. “Alright, let’s beat him up. But what I’ve been watching and seeing is a YouTuber gone professional boxer who puts in hours and hours of work studying films. He’s very disciplined, and he’s working his butt off, and he listens.”

Believe it or not, oddsmakers are even getting in on this Frankenstein monster of a publicity stunt and Mayweather is currently listed as the –3500 favorite. Logan Paul is listed at +1250, and there are a variety of prop bets as well. These include who bleeds first, can Paul make it through the entire match, and who gets the first knockdown of the bout.

In the end, it should be obvious that Mayweather is going to win here, and this match is simply a formality. Of course, Paul will cry foul the second he loses, and try to get a rematch, but we all know how this will go. Paull will get overconfident, leave himself open, and get knocked on his ass. He’ll try to be all macho and get up, but just be knocked down again. The process will continue until he gives up and accepts defeat or gets knockout out.

Bengals Zac Taylor Has the Potential | Bengals vs Texans Recap

The Jaguars Need A Team Not Trevor Lawrence