The Jaguars Need A Team Not Trevor Lawrence6 minute read 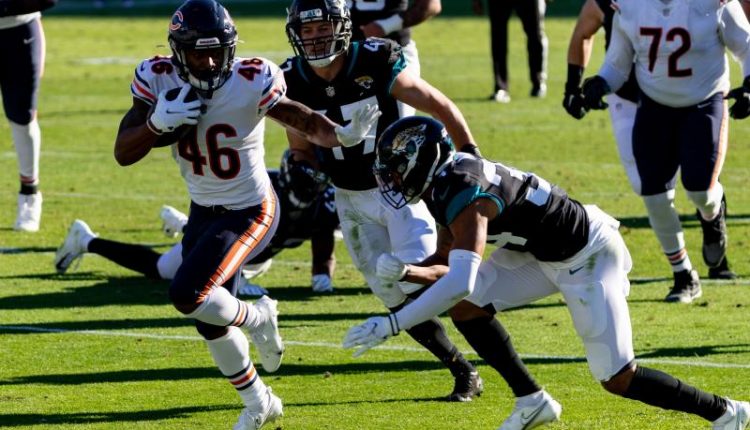 The Jaguars have had an atrocious season, so much so that they have overtaken Jets for the first overall pick in the NFL draft. This was all in thanks to the Jets winning their match and Jaguars being crushed by the Bears 41 to 17.

The Chicago Bears take on the Jacksonville Jaguars during Week 16 of the 2020 NFL season.Subscribe to NFL: http://j.mp/1L0bVBuCheck out our other channels:Pa…

It was an interesting game with nothing between the Bears and Jaguars in the first half. The half had ended with the Bears up by 3 for a 13 to 10 point lead.

Once the second half came around it was pretty much a slaughter as Trubisky started off with a rushing touchdown himself, then another by David Montgomery.

The Bears defense got another interception and drove up the field for another touchdown to add to the open wound. They were beating the Jaguars so bad, they gave the ball to the rookie to get him some stripes. Artavis Pierce scored his first touchdown sealing the victory in stone.

The Jaguars also gave their rookie Laviska Shenault Jr. a 34-yard touchdown pass to make his night worthwhile. It was probably the only thing he can be happy about.

The Bears and their Average Lead

This was their fourth straight game with 30-plus points and you would almost swear they were an exceptional team. They can be good, but they have problems.

The Bears need to beat the Green Bay Packers to get to the playoffs. Another option is hoping the Cardinals lose to the Los Angeles Rams.

The coach Matt Nagy spoke as much on the situation, “With where we’re at right now as a team, it’s definitely different. Green Bay is a hell of a football team and there’s a reason why they’re sitting right now as the No. 1 seed. For us, we’ve got to worry about us. We’re guaranteed one more game, nothing else. If we do well in that one game, then we’ll have an opportunity for more. But we can’t worry about that. We just worry about us.”

If they can keep up their form, they can reach far. It is unlikely though and you can expect to see the Bears fizzle out under Trubisky’s command in the NFL playoffs.

My reasoning? Trubisky only improved after being dropped to the bench for Nick Foles. That said one thing, he was complacently secure in Chicago. He does not have the internal drive to improve or win. Something external had to nudge him.

That is not a good trait, especially since he might get them their first playoff berth in a long time. They might feel grateful and even keep him. Then guess what, he will become comfortable and go back to mediocrity.

Mitchell Trubisky is not fighting to win a Super Bowl, he is fighting to be resigned. Once he is resigned he will relax and go back to old ways. No amount of great schemes, play action with David Montgomery and defensive prowess can make this team great. At best, they are a good team.

Yes, his stats over the last games are great, but they were against the worst defenses in the league, so no, it is not that extraordinary.

Mike Florio and Chris Simms look at the impact Trevor Lawrence could have in Jacksonville on and off the field as the Jaguars prepare to make the No. 1 pick….

The Jaguars Shall Get Blessed, Just Not In the Way You Think.

The Jacksonville Jaguars now have the number one pick locked and loaded. There is one thing everyone is saying.

That It is a sure bet they pick Trevor Lawrence. Is it a sure bet that this will make the Jaguars a better team? No, people forget that quarterbacks picked high up in the draft tend to die and fizzle out into obscurity.

Perfect and current example, Mitchell Trubisky, he was picked before Patrick Mahomes and Deshaun Watson in that legendary 2017 draft. Remember that, Bears fans do. I am not saying Trevor Lawrence is doomed to fail.

He has a lot of hype for a reason, however it is not a certainty. Many quarterbacks picked low in the draft turn out better than those picked high, Brady, Russell Wilson, to name a few.

During the match it was noted the Jaguar fans were cheering their team losing. That must have been debilitating to the players and probably sapped some motivation. They Jaguar organization have never had a franchise quarterback, so I can understand the excitement.

Gardner Minshew, he is more or less a victim of circumstances. At this point, he is looking good to be replaced. So much so, it was not him playing in this match it was Mike Glennon, a former Bears.

If they are going after Lawrence, give him a team that can carry some of the load.

They have other needs to fill. No franchise quarterback can make a terrible team a good team he can only give it sparks of brilliance. They need a furnace not a spark of fire. So they need to get all the wood they can to make the flame that is Trevor Lawrence or whoever else burn as long as possible.

They have needs in every position right now. They have lost most of their esteemed starters at the start of the season prompting many to think they were tanking.

Well, the Jaguars have 11 chances not to screw up this draft. They have a lot of picks high in the draft, so they are likely to get some good prospects.

Their main focus should be rebuilding their offensive line. The last thing they want is to outdo the Bengals in not protecting their quarterback. From there, they can shore up their defensive line and get a tightend, then go down the list accordingly.