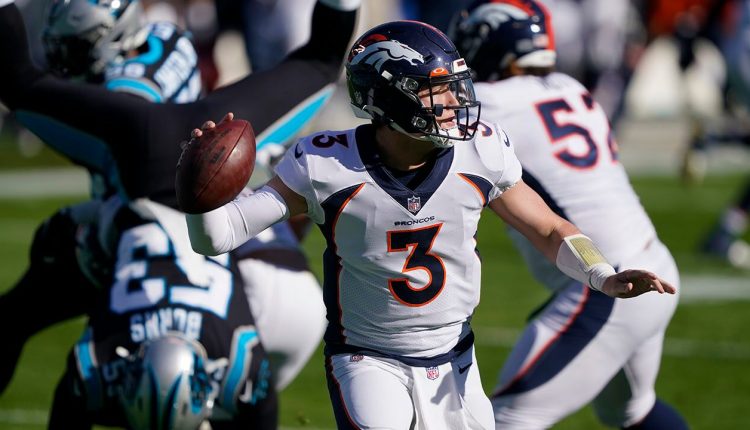 The Denver Broncos seem to be coming back to form after a rough couple of weeks as they knocked over the Panthers in a 32 to 27 firefight. The Panthers will be kicking themselves for this one, because they could have won, but failed to make a play when they needed it.

The Denver Broncos take on the Carolina Panthers during Week 14 of the 2020 NFL season.Subscribe to NFL: http://j.mp/1L0bVBuCheck out our other channels:Para…

The players that showed up for the Broncos on the day were Drew Lock had four touchdowns, K.J. Hamler, Deshawn Williams.

The players that showed up for the Panthers on the day were Bridgewater got 30 out of 40 for 283 yards, Jeremy Chinn.

The match was fun match to watch as Bridgewater and Lock had a good game. But it was in the last quarter where the most spectacular shots were fired. A game of big plays from Hamler’s deep catch down the middle from Lock to the fantastic touchdown drive completed in 28 seconds.

The Panthers squib-kicked the ball to force the Broncos to start next to the goalline, from there they forced a three and out.

They got back the ball and failed to win the moment as the Broncos forced a turnover by applying constant pressure on each attempt. Finally tackling Curtis Samuel on the fourth down and ending their dream of winning.

Their left tackle Garett Bolles missed the game due to an illness. Same for tight end Noah Fant, but he played and felt the illness coming down on him during it. He left the field and did not return.

Both were tested for COVID-19 and the rapid tests came back negative. They will be tested again just in case. Hopefully they return, the team will need for them to with all the other injuries and inactives they have.

They have some backups and rookies stepping up for the starters that have been out. DeShawn Williams come to mind and has played well in his role as defensive linemen. Others like K.J. Hamler, Calvin Anderson, Bradley Chubb will do well for this team in the future.

Thinking of future, looking at this game I can say their run defense struggled and they should be thankful Christian McCaffrey was not playing.

Still, it is doubtful if they will take on the Bills with any possibility of winning. The Broncos defense still has a few good pieces and can make Josh Allen’s life difficult if they band together.

Lock is feeling good after this match, let’s hope the confidence boost can help them in that affair.

Their team has taken a beating over the weeks from many different teams. Right now they are still trying to find their winning formula. Their options at either side of the ball have been good and can be better with some additions and management of the team going forward.

Linebacker Jeremy Chinn is a rookie and has been playing exceptional this season. He had two fumble returns in the last game against the Vikings. It was just bad that they lost that game.

That did not damper his performance in this game as he sacked Lock and stripped him of the ball. Efe Obada recovered the ball and almost returned it for a touchdown, but got stopped just in front of the end zone. It did not matter though as David slotted in the touchdown with a run inside.

If it is any consolidation, they are in a nice position to pick high up in the draft. The question is do they stick with Teddy Bridgewater or get a new quarterback?

They may not need to, but they may want to. Thing is, the problem with the Panthers is not only on Bridgewater. It is multifaceted. From the play calling, to the way the team is being organized overall.

Too many mistakes being made on the specials teams, one led to a punt return touchdown. A lot of penalties plagued the Panthers when they were chasing a deficit.

Panthers will be traveling to the face the Packers and that will be an interesting affair to witness.

NEW VIDEO: The plan is to install Kamala Harris as President