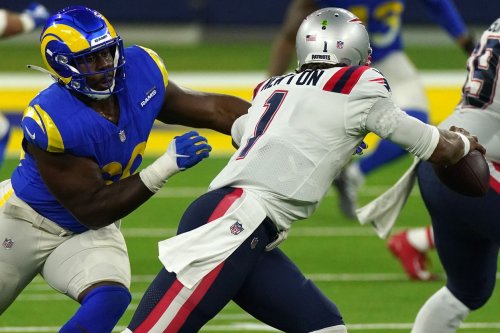 The extremities of the New England Patriots have been an interesting thing to watch, especially since they lost against Los Angeles Rams 24 to 3. Yes, that is correct the Patriots only mustered 3 points the whole game.

The New England Patriots take on the Los Angeles Rams during Week 14 of the 2020 NFL season.Subscribe to NFL: http://j.mp/1L0bVBuCheck out our other channels…

Once the run was stopped. The Patriots had to pass, which was the start of their problems.

At least the Patriots defense kept the match honest by making the Rams work for each point.

The players that showed up for the Rams on the day were Jared Goff, running back Cam Akers got 29 carries for 171 yards, Kenny Young amassed 8 tackles, 1 sack. 1 INT, 1 return TD, Michael Brockers had two sacks, while Aaron Donald racked up 1.5 sacks

The players that showed up for the Patriots on the day were Myles Bryant 1 INT. Jake Bailey had six punts totaling 310 yards, 4 within the twenty yard line.

The Rams went first and pushed down the field with the help of their own rushing offense. They took the lead on their first drive by Goff jumping into the endzone.

Cam Newton came in and got stalled to a three and out by the Ram’s defense. A punt followed, back into Ram’s hands. The Rams came on, but could not repeat the magic two times in row. They were stalled and had kicked a field goal. The Rams lead 10 to 0 half way through the first quarter.

When the rushing was promptly stopped, Newton tried throw, but his pass was batted down by Sebastian Joseph-Day. They punted and the Rams played right into Myles Bryant’s hands as he intercepted Goff’s pass giving the Patriots hope with a minute to go.

The Patriots did not do much before the time went out and were left on the Ram’s 19 yard line.

The second quarter started with a bang as Kenny Young got a pick six of Cam’s first play, a pass. Rams were now up 17-0. The Patriots tried to come back big connecting some passes and runs together, but they got nothing out of it when Cam was taken down on their fourth down ending that fairy tail.

The Rams next drive materialized nothing as the Patriots to keep them locked down near their endzone. The Patriots did not waste their opportunity and rushed down the field with a two minute warning hovering over their next actions, they opted for a kick and Nick Folk sent through the uprights to finally put New England on the board.

The Patriots drove into LA Rams territory and was about to make something out of nothing. Cam threw a deep ball on his third down, but N’Keal Harry just could not get the ball. Another heartbreaking third and out, that led to a punt.

The Jared Goff succeeded where Cam Newton failed and drove his team all the way down the field with slow precision. Goff finished what he started and hits Cooper Kupp for a touchdown.

New England ended the quarter, fourth down, on their own 30-yard line.

You guessed it, it was a punt. They decided not to make it any easier for the Rams to get a touchdown.

Then the match became a series of punts as the offenses of both teams were tired and the defenses were starting to get into their element.

But Olszewski broke the monotony with a nice return to the Rams’ 34-yard line off the Ram’s punt. Jarett Stidham comes to save the day and slips on his cape trying. He moves the ball a bit, but fails to get anything out of it, turning over the Rams after an incomplete pass.

The Rams just waste time until they punt. The Patriots surged down the field determined to get a touchdown, but the Rams defense woke up at the last minute and sacked Stidham to end that dream.

In the end the match ended exactly as anyone would expect. The Rams defeated the Patriots 24 to 3.

There was nothing fancy about the Ram’s win. Sean McVay did not try anything special. It was simple, run the ball to waste time. Rush and destroy the offensive line of the Patriots and prevent runs, force Cam into mistakes.

It was good old fashioned football.

The Rams’ defense restrained the Patriots to 220 total yards of offense. They tallied up 6 sacks, 10 QB hits.

Jared Goff did his job, run the offense without mistake. Well, except the Myles Bryant interception this was mostly Bryant’s greatness at snapping the ball out of Wood’s hand.

The Rams at 9-4 are eerily atop the NFC West. With the New York Jets yet to play, they are looking bound for the playoffs. The question is can McVay’s genius and Goff’s easy going efficiency see them to the Super Bowl?

They have the defense to do it. The offensive weapons leaves much to desire compared to other teams, but McVay’s play calling should be able to make greatness out of their ordinary offerings.

The Patriots, What Can You Say?

The Patriots are now at 6 wins to 7 loses. The wildcard hopes are looking dimmer each match.

The Patriots could get none of their third and fourth down conversions connecting. This lead to many stalled drives that went nowhere.

The New England offensive side of the ball is not of the high quality it used to be. The Rams knew this and turned up the dial on their pass rush. The Ram’s blitzes rampaged over the Patriots and made their efforts futile.

Still, Cam Newton played poorly. He miss timed passes to his receivers, if not just straight missed them in reads. He was constantly rattled by the Ram’s pass rush, he looked very uncomfortable out there.

In response, he was benched near the beginning of the fourth quarter.

Funnily, he gets benched every match now. But let us try to think about this. Cam Newton is a player known for his energy and wrapping his emotions into his playing.

Essentially, he is an confidence player. When he is confident and on a high, he will perform like superman. When he is low and depressed, his performance suffers. I think I can say his low confidence is making him worse.

This is why he started out so well early in the season. Things were going well, he was happy.

He is not happy now.

Instead of stepping up and making the most of the situation like some quarterbacks would, he is failing in the role of commander. He is showing the depression and hesitation that resulted in the Super Bowl lost back when he was at the Panthers and happened after that.

It’s worse now, because the Patriots have never had talented players, just players that work harder than the rest. Cam is in a different environment from his personality. He does not fit in and when they need a determined comeback, Cam lets them down royally.

When he is on a high, he is flying. Outside of that, he struggles, badly.

Playstyle wise the Patriots is a perfect team for him, personality wise, not so much.

Cam Newton: ‘We have to be better and it starts with me’ | Patriots Postgame Press Conference

So what is Belichick thinking about this situation? That we cannot say. Belichick is known for giving nothing and revealing nothing.

The Patriots are having their first mediocre season in a long while and the fans are not sure how to feel. They are used to the Patriots dominating and now they have to sit and watch this? This will be a test of the fanbase for sure, especially if it lasts beyond this year.

Could this be President Trump’s secret weapon?