I read the 87 page Senate investigation on Hunter Biden, here’s what I found11 minute read 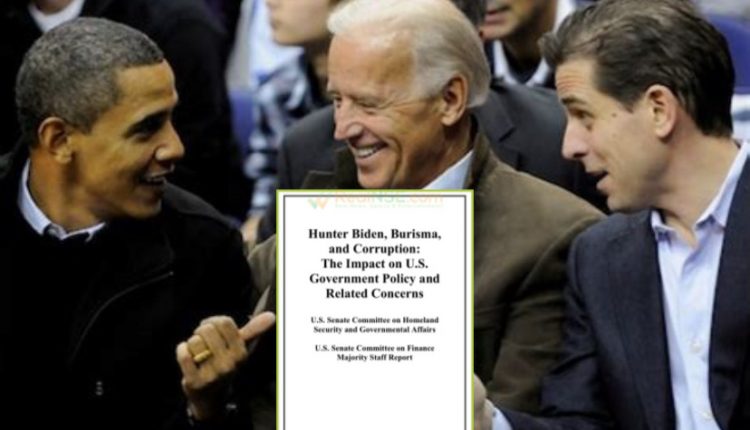 This 87 page Senate briefing makes it clear that there were in fact HUGE conflict of interests going on throughout President Obama’s State Department. Furthermore, Hunter’s ties to Burisma made things extremely difficult for the Obama administration’s “fight” against corruption. The report also states that a number of State Department officials expressed concern over the Vice President having a son being on the board of this massively corrupt oil company, but they were ignored.

Hunter surrounded himself with some of the most corrupt people across the world. Many of which ended up with criminal charges. The committee uncovered possible criminal content by Hunter Biden himself. Joe Biden’s son cozied up to crooked foreign actors including communist China.

I read the entire report. Here is what I found to be the most damning and most alarming. Please share this article to help expose the Biden family corruption.

Page 1: Hunter Biden’s position on the board created an immediate potential conflict of interest that would prove to be problematic for both U.S. and Ukrainian officials and would affect the implementation of Ukraine policy.

Page 2: Access to relevant documents and testimony has been persistently hampered by criminal investigations, impeachment proceedings, COVID-19, and several instances of obstructive behavior. Accordingly, this investigation has taken longer than it should have.

Page 4: This is a good-government oversight investigation that relies on documents and testimony from U.S. agencies and officials,

Page 4: What the Chairmen discovered during the course of this investigation is that the Obama administration knew that Hunter Biden’s position on Burisma’s board was problematic and did interfere in the efficient execution of policy with respect to Ukraine. Moreover, this investigation has illustrated the extent to which officials within the Obama administration ignored the glaring warning signs when the vice president’s son joined the board of a company owned by a corrupt Ukrainian oligarch. And, as will be discussed in later sections, Hunter Biden was not the only Biden who cashed in on Joe Biden’s vice presidency.

Page 7: The Senate Committee on Homeland Security and Governmental Affairs (HSGAC) and the Senate Committee on Finance undertook this investigation into potential conflicts of interest, and the involvement of the Biden family in foreign business ventures while Joe Biden was vice president, following allegations that the Obama administration’s Ukraine policy could have been affected by Hunter Biden’s position on the board of Burisma, and that family members may have improperly sought to benefit from their relationship with the vice president.

Page 7: The appearance of a potential conflict of interest in this case was particularly troubling given Hunter Biden’s history of investing in and collaborating with Chinese companies, including at least one that clearly poses significant national security concerns.

Page 8: In 2016, Ukraine’s top prosecutor, Viktor Shokin, had an active and ongoing investigation into Burisma and its owner, Mykola Zlochevsky. At the time, Archer and Hunter Biden continued to serve on Burisma’s board of directors. According to news reports, then-Vice President Biden “threatened to withhold $1 billion in United States loan guarantees if Ukraine’s leaders did not dismiss [Shokin].”11 After that threat, Ukraine’s Parliament fired Shokin.

Page 13: THE VICE PRESIDENT’S OFFICE AND STATE DEPARTMENT OFFICIALS WERE AWARE OF BUT IGNORED CONCERNS RELATING TO HUNTER BIDEN’S ROLE ON BURISMA’S BOARD.

Page 13: In early 2015, senior State Department official George Kent raised concerns to staff in the Office of the Vice President about Hunter Biden’s role on Burisma’s board. Kent testified that he never heard anything back from the vice president’s office, and although Kent advised that Hunter Biden should step down from Burisma’s board to avoid the perception of a potential conflict of interest, his recommendation was not followed.

Page 13: Hunter Biden’s role on Burisma’s board continued to be an issue State Department officials had to manage when executing U.S. / Ukraine policy. More than a year after Kent reported his concerns to the vice president’s staff, he wrote to his superiors that Hunter Biden’s role on Burisma’s board was “very awkward” to those on the front lines pushing anticorruption efforts in Ukraine on a daily basis.

Page 16: More than one year after Kent reported his concerns about Hunter Biden to the vice president’s office, he once again raised the issue — this time to his superiors at the State Department.

Page 16: On Sept. 6, 2016, Kent wrote an email to senior State Department officials, including Deputy Assistant Secretary Bridget Brink and U.S. Ambassador Marie Yovanovitch, and offered his contemporaneous view of Hunter Biden’s association with Burisma. Kent wrote, “the presence of Hunter Biden on the Burisma board was very awkward for all U.S. officials pushing an anti-corruption agenda in Ukraine.” In testimony Kent expanded on this comment:I meant that people who talk the talk need to walk the walk, and for the U.S. government, collectively, when we talk about the need to have high standards of integrity, again, as I’ve said, the presence of [Hunter Biden] on the board created the perception of a potential conflict of interest.

Page 19: SECRETARY OF STATE JOHN KERRY FALSELY CLAIMED HE HAD NO KNOWLEDGE ABOUT HUNTER BIDEN’S ROLE ON BURISMA’S BOARD.

Page 31: Committees found that Hunter Biden scheduled travel as a protectee after joining Burisma’s board in May 2014.

Page 33: During his December 2013 trip to China, during which Hunter Biden flew on Air Force Two, Hunter Biden admitted he met with a Chinese banker. According to news reports, Hunter Biden appeared to be conducting his own private business during this specific trip and was working to secure a deal in the hopes of creating a Chinese equity fund.

Page 55: As part of their efforts, Democrats laundered their unclassified speculation through classified analysis of intelligence reporting to fabricate a veneer of credibility in an effort to shield their claims from public scrutiny. Those false claims were then leaked to friendly media outlets, which reported them as fact.

Page 55-64 go through all the attempts by the Democrats to undercut, undermine and kill the investigation into Hunter Biden. You should go read that section for yourself. It’s damning.

Page 65: Hunter Biden was paid as much as $50,000 per month to serve on the board of Burisma, a Ukrainian natural gas company with a corrupt owner, while his father was the public face of the Obama administration’s Ukraine policy.

Page 65: The Treasury records acquired by the Chairmen show potential criminal activity relating to transactions among and between Hunter Biden, his family, and his associates with Ukrainian, Russian, Kazakh and Chinese nationals. In particular, these documents show that Hunter Biden received millions of dollars from foreign sources as a result of business relationships that he built during the period when his father was vice president of the United States and after.

Page 65: These foreign nationals have questionable backgrounds that have been identified as being consistent with a range of criminal activities, including but not limited to organized prostitution and/or human trafficking, money laundering, fraud, and embezzlement.

Page 75: Hunter Biden’s business associations in China were not limited to investment funds like BHR and those additional connections created questionable associations with Communist government elements.

Page 84: The records acquired by the Committees show that Hunter Biden and his family were involved in a vast financial network that connected them to foreign nationals and foreign governments across the globe.

Page 84: Biden and Archer found willing partners in Chinese nationals connected to the Communist regime. Their work in China began at least in 2009, with the creation of Rosemont Seneca Partners with Heinz, Secretary of State John Kerry’s stepson. Then, several years later, Biden and Archer formed BHR with Bohai Capital and received their business license approval in China shortly after Biden visited China with his father, Vice President Biden.

Page 84 & 85: The records acquired by the Committees show consistent, significant and extensive financial connections among and between Hunter Biden, James Biden, Sara Biden, Devon Archer, and Chinese nationals connected to the Communist regime and PLA as well as other foreign nationals with questionable backgrounds. These connections and the vast amount of money transferred among and between them don’t just raise conflicts of interest concerns, they raise criminal financial, counterintelligence and extortion concerns. The Committees will continue to evaluate the evidence in their possession.

Page 86: As the Chairmen’s report details, Hunter Biden’s role on Burisma’s board negatively impacted the efforts of dedicated career-service individuals who were fighting to push for anticorruption measures in Ukraine.

Page 86: Unfortunately, U.S. officials had no other choice but to endure the “awkward[ness]” of continuing to push an anticorruption agenda in Ukraine while the vice president’s son sat on the board of a Ukrainian company with a corrupt owner.

Page 87: The Chairmen’s investigation has faced many obstacles from the minority and from executive agencies that have failed to comply with document requests. Accordingly, there remains much work to be done.