Floyd vs Logan Illustrates The Problems in Boxing10 minute read 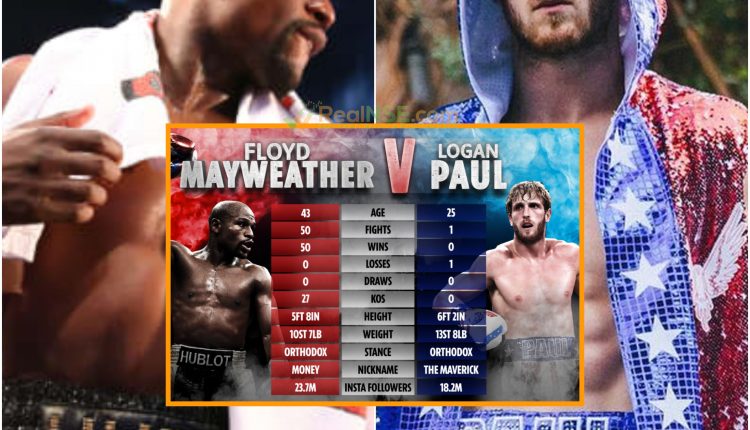 February 20, 2021 will be the day of a special exhibition match between Floyd Mayweather and Logan Paul. The possibility of boxing restoring its faith in the circles of hardcore fighting fans seems ever fleeting as the time goes on.

DC & Helwani react to the news of Floyd Mayweather and Logan Paul competing in a boxing match on Feb. 20. They also (2:30) discuss if they’d want to see Dill…

Now, I am sure there are many who want to react with the usual, this is not a real fight, this is a disgrace to boxing, Logan Paul does not deserve this fight.

Well, you are to an extent right, but I think what is more interesting is that one, this was never surprising. Two, there is a deeper problem here that many fail to realize. It has less to do with the fighters and more to do with boxing as an industry and overall influence of specific cultures in the command of any organization.

Good, now let’s dig into this with the surface level of reactions and implications this announcement makes.

Many reacted with shock, like boxing star Ryan Garcia who said, “I have no words just wow.” Joe Rogan said the fight was ridiculous.

Some reacted with anger that they would give Logan a fight with a great when Logan has not earned it and has no wins to speak of.

Many reacted with disappointment and frustration, like Dana White and others.

Unlike Jake Paul, Logan Paul lost his first match in boxing. So many pundits were shocked it was him not Jake. Dana White even said it was a bad look on the sport for one the greats to give such a chance to a fighter with only one match, that being a loss.

It showed the desperateness of the sport of boxing.

Why was Jake not on the billing then? He won two fights and looked more respectable to take this fight and this beating Floyd have in store for him.

Maybe Jake was approached, but he declined because he probably takes his career more seriously? Still, Jake can easily get dragged into the big money game soon enough. For now, Jake can work on improving. If he wants to knock out anyone and become the best as he so desires he needs to improve.

Logan Paul might not have the same goals. He might just be doing this for the money. Hence why he is full throttle for this fight, Logan does not care if he gets knocked out in the first round and is played with by Floyd.

Floyd knows this, he sees the dollar signs clearly. He does not care if this match Is an insult to all the young boxers wanting a shot. He sees the money and is running towards that. Also, the fact that this is an exhibition match means that officially his undefeated record will remain untouched.

It sounds like a nice deal. The distinct possibility of Logan winning is extremely low, but miracles can happen. Personally I will not bet on it and neither should you unless you love burning money.

Logan’s size won’t matter either. This is a boxing match, not a MMA match. Plus Logan’s inexperience will be his downfall against Mayweather’s defensive skills.

Floyd is a performer and many doubt he will knock out Logan in too quick. He will want to give the fans a show, meaning he will hold back and allow Logan to look good for a few rounds before turning on the engine.

Like Floyd did with McGregor, Floyd held back in the beginning of their fight. But Floyd respects McGregor. Floyd may not extend that privilege to Logan.

Logan will probably get the Tenshin Nasukawa treatment, remember that kickboxer who got knocked out three times in the first round, yes that treatment.

This leads into the part that is the most important thing about this, the organization itself.

Stephen A. & Max react to the Floyd Mayweather vs. Logan Paul fight announcement

Stephen A. Smith and Max Kellerman discuss the announcement that Floyd Mayweather Jr. will return to the boxing ring for an exhibition bout against YouTube s…

The Mess That Looks Prettier Than Gold

Dana White once joked about starting his own boxing promotion. Why, you ask?

“It’s hard for me, I hate speaking negatively about the sport of boxing other than the fact it’s a mess. We all know it’s a mess. It needs to be fixed, if it can be fixed,” White said. “I will tell you Kevin, I told you guys that I would have a press conference last October and announce all these things. But as I dove into this thing and started to look into the sport of boxing, the economics of boxing, that sport is a mess. It’s a mess and it’s in big trouble. I don’t know. I don’t know if it can be fixed.”

So what are the problems? Well, one that has been mentioned is that there too many belts being offered across four entities. The IBF, WBA, WBC and WBO are those entities. Well, you would say MMA has multiple promotions with their own trophies.

True, but UFC is considered the lead promotion by far and those boxing belts are the prestige belts. So you would have the lower rank belts for champions of the same weight class, yes they are supposed to be of a lower grade. Sounds confusing, it is and it leads to the idea of a champion seem cheap to most viewers.

Winning one belt is not seen as a great achievement because of this. If you want to be considered a ‘champion’ you would have to win multiple championships.

So why do the sanctioning bodies do this? Money of course, there are fees attached to each sanction.

In talking about money, fans want to spend money on the sport, but do not get much value out of it. Boxing has limited the amount of fighters on a specific pay-per-view (PPV) tone big fight, one co-fight.

It is hard to expect people to spend money to see two fights. In the past, many fights were shown on each PPV. So few fights is just not enough, but I cannot blame them.

The money is not rolling in as much as it did back in the past for most fights.

Reason, the viewership has dropped immensely. It is only in recent years thanks to the McGregor fight and MMA fighters wanting to transition into boxing that we have seen it gaining popularity.

If there is more chance for profit, there will be more fights and more fighters.

To be honest though boxing should have never found itself in this problem. Boxing nowadays needs no large stadiums and massive expenditure to run.

They just need to appeal to the fighters with the adequate reward money and the fans with the fight they want.

Its simple people want to see their fighter, a prize fighter. Promoter pays fighter to show up for fight. Ordinary fighters cannot demand too much these days, because promoters do not make as much. Not like in MMA, which is more stable and profit wise can pay lower fighters well thanks to income they made from bigger fights.

Small fight shows almost never make profit, they are seen as an investment by the promotion to increase a fighter’s reputation. So as a fighter becomes popular, more people want to see him in action which is what promoters want.

This brings up the problem of television networks having too much power over the sport. Some, like HBO can pay fighters extravagant deals to get exclusive fights. Fights they favor over anything else out there in the sea.

This is technically illegal with many calling out HBO for acting like a promoter not a TV network. The bigger problem is that most fighters get left out of these big money deals. These deals are for the few, while the many suffer with paltry payments from their promotion.

Look at the Floyd fight with Oscar De La Hoya, the profits went over one hundred million dollars. Both fighters went away with tens of millions from one fight. HBO milked the occasion with a miniseries and a media campaign worthy of an Oscar.

Normal fighters never get these campaigns, only those prize, popular fighters do. Popularity is more important in boxing than skill. That is the state of boxing as it is right now.

Tens of millions will be made from this Floyd vs Logan fight, especially since people hate Logan and seeing him get hammered by Floyd is worth its weight in gold. Logan will smile on the way out though, because he will be making a lot of bank from this fight, that is for sure.