The Patriots Got Their Groove Back8 minute read 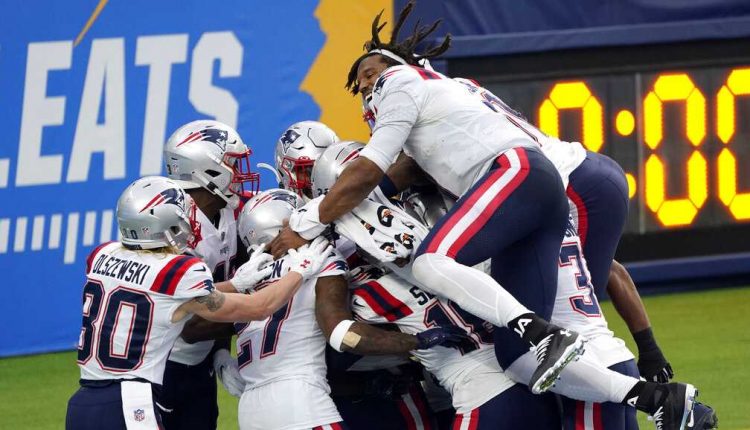 The Los Angeles Chargers got the beating of a lifetime and Cam Newton barely had to throw the ball to achieve it. The New England Patriots defeated the Chargers 45 to 0 and Justin Herbert is starting to wonder if it is him or his team.

Actually, it is the team mostly, but we will talk about that soon enough.

Let’s get to how they were beaten down.

The players that showed up for the Patriots on the day were Stephon Gilmore, Olszewski got 2 TDs, Cam Newton, Damien Harris with 16 carries for 80 yards, Deatrich Wise, Adrian Phillips got 12 tackles and a pass deflection.

The offense pushed down the field with a running start from Damien Harris and Cam Newton. Both of them tag-teamed against the Chargers defense and the Chargers struggled to hold them back.

Cam Newton even carried the ball himself for a touchdown. The Chargers rebounded with a strong opening, but Deatrich Wise Jr. sacked Justin Herbert leading to a kick on 4th down. Sadly it sailed wide, the Patriots got back the ball and did not utilize the chance, going three and out.

The Chargers tried and had to punt as expected. What they never expected was Olszewski returning it for a 70-yard touchdown. The Patriots were now at 14-0.

The Chargers barely brokered a threat and were stifled again. That truck was driven down to the endzone again for another touchdown for Cam Newton.

Justin Herbert was not willing to give up. He rallied the Chargers into the Patriot’s half and they tried for a field goal. Guess what, the kick was blocked and was returned 44 yards by Devin McCouty for a touchdown.

You cannot write this level of bad luck, you could try, but you had to see it to believe it. Unlike the Chargers kicker, Nick Folk never failed or had a stroke of luck when he sent it pass the uprights.

Patriots were at 28, while the Chargers were not even on the board.

Bad luck continued to plague the Chargers as Justin Herbert got intercepted by Chase Winovich. The Patriots did not disappoint, for they racked up another touchdown.

The Chargers came close again, then an interception. J.C. Jackson was the culprit this time and Justin Herbert just could not get any luck. The patriots pushed the field, but failed to inspire anything other than a punt.

The Chargers started, but the Patriots crushed their hopes again. Olszewski had another big return all the way to their 17-yard line.

The Patriots attempts to get a touchdown fell flat, so they went for their bread and butter Folk who delivered with another kick through the uprights.

Justin Herbert got sacked again forcing a turnover. Jarrett Stidham came on for Cam Newton. After all the beating he took for rushing all over the Chargers, he needed the rest. It now turned into a throwing offense as Stidham connected up some passes ending with Olszewski getting a 38-yard touchdown.

Nick Folk put them up further and made it 45 to 0.

Justin Herbert tried to prevent the shutout, but the New England defense made sure to seal it with great coverage play and constant pressure. Stidham came back on the field and ran down the clock with three rushes and a punt.

The Patriots Defense Can Carry Cam Newton to the Promised Land

Go on the sidelines of the Patriots 45-0 victory over the Los Angeles Chargers.Subscribe to the New England Patriots YouTube channel: http://bit.ly/2IOD2e9Fo…

It is as the title says. The Patriots found their winning formula. Took a while, some losing here and there, but they found it.

Bill Belicheck was originally known for his prowess as defensive coordinator. He proves that a good defense can win championships. They won many before, actually the last super bowl win was a defensive battle against the Rams.

They decimated the Rams offense and they can easily repeat that. Still, they had a reasonable good offence. Now, the offense of the Patriots is only good against teams that struggle against the run.

The Chargers being a good example, a rushing offense is not a bad idea. It can become something similar to the system the 79ers have.

One problem they still have an attack that threatens enough to make it work. The Patriots do not have that with Cam Newton at the helm. It should be noted Newton can return to form as a throwing quarterback, but right now his inconsistency is rearing its ugly head.

Still, the team as a whole stepped up, especially the specials team. They responded with not one, but two specials teams touchdowns.

Props to the rest of the team, Donte Moncrief and Matthew Slater especially that blocked for Olszewski to allow him that stretch of the field to run, it was a good team effort.

If the Patriots can bolster their offense and make it more reliable even when they running is taken away then they can be a championship winning team for sure.

Gilmore suffocated Keenan Allen’s chance to catch a ball. Allen only had 48 yards just to emphasize how good Gilmore was. Thanks to that Justin Herbert struggled to make headway in the match.

The Chargers Have Not Found Their Winning Formula

They know New England wanted to run, yet Cam and Harris still ran over them anyway.

But they have the tools in defense to play well, like Joey Bosa etc. But the defense always end up failing Herbert in some way. They lack consistency. Also the management of the specials teams was horrible, it had been not noticed until now, because they never played a football team that could out match them in attention to detail.

The Patriots are notorious for attention to detail and made to make us know even the specials team take their job seriously unlike the Chargers. At one point, the Chargers got called for a penalty for having 12 men on the field. Then during a punt, they had ten men on the field.

Such laughable disorganization is ridiculous.

It really comes down to coaching. Yes, Justin Herbert made mistakes. The defense is not as detail oriented as the Patriots, but that is no excuse for a shutout. When it comes down to it, the coaching staff has to take the blame here.

The culture is being built at the Chargers camp, it is not helping. It has turned great players into inconsistent sad displays week in week out. The team needs to do better, but the staff has to hold them to a higher standard first.