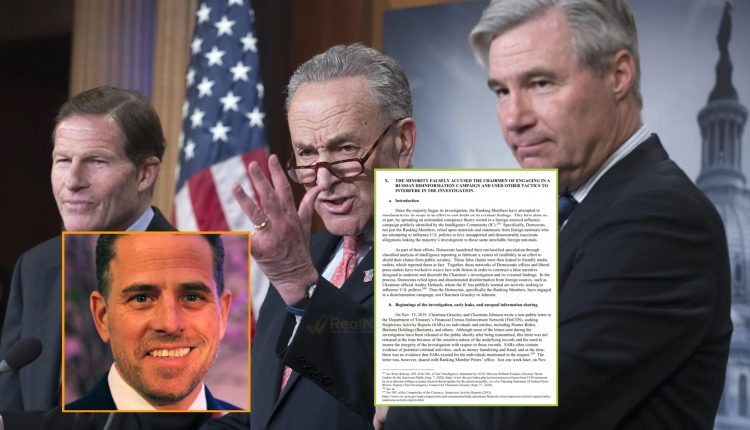 Since the majority began its investigation, the Ranking Members have attempted to mischaracterize its scope in an effort to cast doubt on its eventual findings. They have done so, in part, by spreading an unfounded conspiracy theory rooted in a foreign-sourced influence campaign publicly identified by the Intelligence Community (IC). Specifically, Democrats, not just the Ranking Members, relied upon materials and statements from foreign nationals who are attempting to influence U.S. politics to levy unsupported and demonstrably inaccurate allegations linking the majority’s investigation to those same unreliable foreign nationals.

As part of their efforts, Democrats laundered their unclassified speculation through classified analysis of intelligence reporting to fabricate a veneer of credibility in an effort to shield their claims from public scrutiny. Those false claims were then leaked to friendly media outlets, which reported them as fact. Together, these networks of Democratic offices and liberal press outlets have worked to weave fact with fiction in order to construct a false narrative designed to undercut and discredit the Chairmen’s investigation and its eventual findings. In the process, Democrats relied upon and disseminated disinformation from foreign sources, such as Ukrainian official Andriy Derkach, whom the IC has publicly warned are actively seeking to influence U.S. politics. Thus the Democrats, specifically the Ranking Members, have engaged in a disinformation campaign, not Chairmen Grassley or Johnson.

It goes on and on for pages. It reveals that the Democrats even leaked information pertaining to the investigation to various media outlets in hopes to undercut the findings and create doubt. This is absolutely disgusting. I recommend everyone read this report. It truly shows who the Democrats care for most. Themselves…

Page 64: Congressional oversight can and should be nonpartisan. It should be focused on exposing wrongdoing regardless of who is involved and on ensuring transparency and accountability in government on behalf of the American people. Efforts to discredit legitimate oversight, especially using foreign disinformation to sow discord, only serves to benefit our foreign adversaries at the expense of our own democratic institutions.

Once again the Democrats are exposed for accusing the other side of the exact same thing they’re actually doing. Instead of getting to the truth and ensuring justice, they’re more concerned about protecting their own.

I continue to read through the 87 page document and will be posting more of my findings soon.

The Patriots Got Their Groove Back