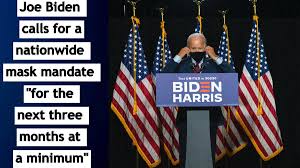 On Tuesday “President-elect” Joe Biden, announced that he and his administration have come up with a 3 part plan to combat and tackle the Coronavirus (COVID-19) during his first 100 days in office. Biden, was speaking in his hometown of Wilmington, Del., where he formally announced his team of health officials and highly emphasized that Masking, Vaccinations, and Opening Schools, are is top three goals during his first 100 days. 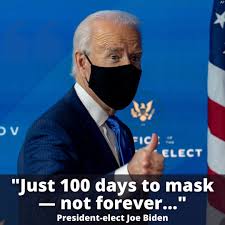 The “President-elect” went on to state “I’m absolutely convinced that in 100 days we can change the course of the disease and change life in America for the better.” Biden also put out for the first time how he would implement his mask mandates during his first 100 days of his administration. The “president-elect” stated that he would sign an order on his first day to require masks were he can “under the law” mandate the wearing of the mask in federal buildings, interstate travel on planes, trains, and buses. Biden also stated that he will be working with the governors and mayors to do the same in their states and cities.

President-elect Biden, decided to then emphasize that the American People should help themselves and their families and communities and that wearing a masks for the first 100 days will make a difference and that it’s not a political statement but a patriotic act.

Biden and his team have urged the American people to take the corona vaccine, and to wear masks but stated that they should not be mandatory.

Is this how the new regime is starting the process of communism and the takeover of America, by implementing 100 day orders and dictating how we should live our lives, and what vaccines we have to take in order to work or live freely? The writing is on the wall, this is how those Communist Countries started by making small mandates and slowly taking away the freedom of the people.

Joe Biden is ANTI-2A and here’s the proof

In this clip taken from The Real Side Podcast 002, I talk about Joe Biden and his history of being anti second amendment and how he is an authoritarian to th… 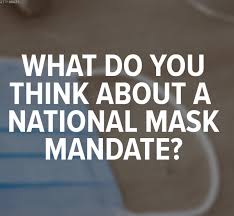 I read the 87 page Senate investigation on Hunter Biden, here’s what I found