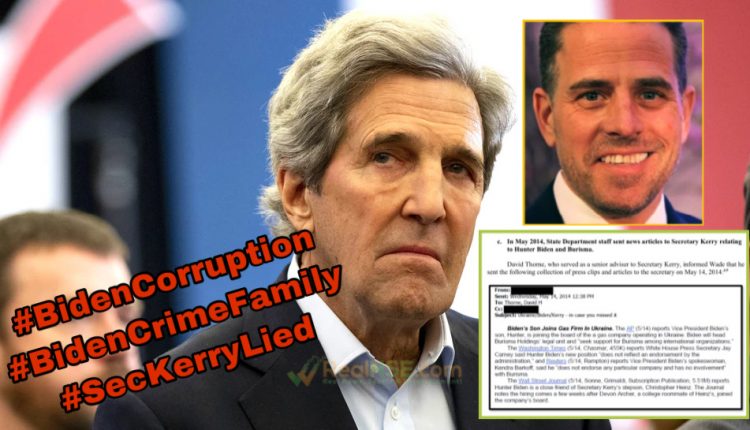 Back in 2019 a reporter asked former Secretary of State John Kerry about his thoughts on Vice President Biden’s son Hunter, being on the board of a corrupt energy company in Ukraine. That company is Burisma.

Burisma is all over the 87 page report. There is so much damning information in this report. I’m just about done reading it and will be filing more articles once finished. So keep checking back, you’re not going to want to miss this!

But this one I wanted to post right away seeing as Kerry – the lying swamp creature that he is – may be in Joe Biden’s cabinet if he gets inaugurated. This sort of corruption needs to be brought to light!

Kerry could have ended the Biden family corruption when he headed up the State Department, but he didn’t. He allowed it to happen. He allowed Hunter Biden to get rich off of his father being the Vice President of The United States. Lord only knows what Kerry possibly got paid to look the other way. Lord knows what secrets Hunter Biden gave to foreign adversaries.

This question was presented to Kerry back in 2019.

In a gaggle with reporters after @JoeBiden’s town hall in Nashua, NH, I asked @JohnKerry, who was Sec of State at the time, if he knew and was comfortable when Hunter Biden joined the board of Burisma:”I had no knowledge about any of that. None. No.” pic.twitter.com/j3lazGcbhb

Page 19 of the U.S. Senate report on Biden/Burisma is entitled “SECRETARY OF STATE JOHN KERRY FALSELY CLAIMED HE HAD NO KNOWLEDGE ABOUT HUNTER BIDEN’S ROLE ON BURISMA’S BOARD.”

The following was taken right from the report…
Separately, State Department officials wrote that they sent the secretary articles with the headlines, “Biden’s son joins Ukrainian gas company’s board,” “Biden’s son joins Ukrainian gas producer board,” and “White House says no issue with Biden’s son, Ukraine gas company.”62 Accordingly, these records suggest that Kerry did, in fact, know about Hunter Biden and Burisma.
Follow us!
BurismaHunter BidenJoe BidenUkraineUS Senate

Opinion: Could a Biden Presidency be good for the Conservative movement?