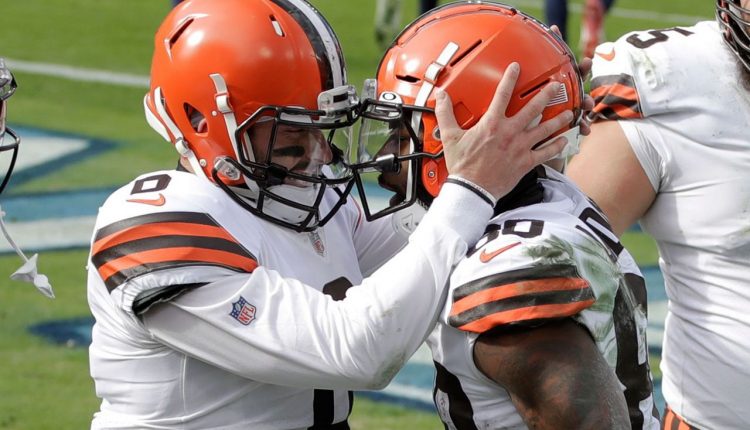 The Cleveland Browns are a winning team and are looking hot on route to the super bowl after they beat the Tennessee Titans 41 to 35. Whether they are rushing or passing, the Browns cannot be stopped. The funny thing, before this season they were a losing team with no hope of a future in NFL football.

The coach Stefanski has turned this team around, built a winning culture and truly maxed out the talent into an offensive scheme that works.

The players that showed up for the Titans on the day were Baker Mayfield racked up 252 passing yards, 4 TDs, Nick Chubb got eighty yards, one TD, Higgins got 95 yards, 1 TD, J. Landry got 62 yards and 1 TD.

The players that showed up for the Titans on the day were Ryan Tannehill racked up nearly 400 passing yards with 3 TDs, C. Davis got 11 receptions for 182 yards, Kenny Vaccaro.

The Browns Fans Can Take off the Paper Bags Now

The RISE Of The Cleveland Browns: From 0-16 To SUPER BOWL CONTENDER? (ft. Cole Adams)

The Titans were badly beaten and honestly it could have been worse. At halftime they were trailing 38-7. The Browns defense did not hold onto that large lead for long.

The Titans came back swinging hard, but the mountain Mayfield built up was too high for them to climb. Baker managed the game well and they rushed the ball wasting time and cutting through the Titans defense without regard.

The Browns are second in the AFC North right now pushing the Ravens out of contention. The Steelers are not losing their top spot anytime soon, especially with Washington knocking them off your pedestal.

They also demolished all teams in the AFC South. With things as they are now, the Browns are likely to play a team from the AFC South in playoff action.

Their next match will be against the Ravens and if they win this match they can bury the Ravens playoffs hope and solidify theirs.

Their defense needs to do better keeping up the pressure all throughout the match. They caused three turnovers, but when the passing started, the secondary struggled.

The linebacker core did well to stop Derrick Henry. Malcolm Smith, Mack Wilson and others really hindered the Titans rushing prowess all game.

Still, the Browns need another cornerback and better safeties. So, that is on their to-do list for next season. This does not mean I am counting them out for a playoff berth.

That, they will get. A Super Bowl would be hard to imagine, but anything is possible. Regardless, they will do well to build on what they have right now. The last thing fans want is for the team to regress to losing ways after this.

They just had the first winning season in a long time. Fans enjoy the game, players are happy and having fun. Stefanski and the staff are being praised for their hard work and dedication.

Let the good times continue Browns organization; the fans will love you for it.

The Titans Are Not a Bad Team

Mike Vrabel: It Comes Down to Efficiency

There is this narrative that because of this loss and other specific losses that the Titans are not good enough. They are a good team, just not a great team. If you were expecting cheat-code level efficiency like the Chiefs then you will be sorely disappointed.

They are pretty much in the same situation as the Patriots. Only problem, their defense is badly inconsistent when it matters the most.

If they can keep up the pressure the whole match like the Patriots then you have a team that can threaten for the Super Bowl. When under pressure this team can pull off plays.

Tannehill scored two unanswered touchdowns within six minutes to show they meant business. The Titans were unfortunate though.

Adam Humphries deflected a Tannehill pass, it got recovered by M.J. Stewart.

They made Mayfield fumble, got a touchdown from it. They even tried to pull off an offside kick to make a dire attempt at winning the game with 28 seconds left. The Browns killed that dream when they caught that kick.

The Titans need top notch receivers to really be a threat in attack. The fact that Tannehill racked up so many point to almost come back does not matter. The Browns defense against the pass has been poor this season so this almost comeback does not validate the receiving core.

That was thanks to Tannehill and he could use the help just in case the rush gets stopped again.

The Patriots Got Their Groove Back