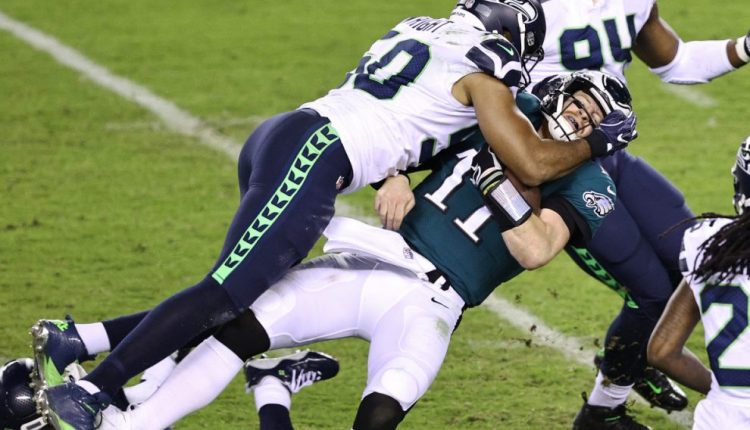 The Seahawks bounced back this NFL football week with a well needed win over the Eagles and it has to be wondered how the great Carson Wentz as fallen so.

The Seattle Seahawks take on the Philadelphia Eagles during Week 12 of the 2020 NFL season.Subscribe to NFL: http://j.mp/1L0bVBuCheck out our other channels:…

Then again, the Eagles seemed to have predicted this and as such drafted for Jalen Hurts. Smart drafting, but it must hurt for Wentz fans to see him fall off the precipice this badly. In the past, Wentz was considered one of the top quarterbacks in the league.

So what happened? Well, there are a couple reasons. Half are on him, half have to do with the structure of the team right now.

The players that showed up for the Seahawks on the day were D.K. Metcalf caught 10 passes for 177 yards, Jamal Adams, Russell Wilson, L. J. Collier.

The players that showed up for the Eagles on the day were Derek Barnett, Avonte Maddox.

The Eagles started first and went three-and-out which was a peek into what would be majority of this match for the Eagles. The Seahawks sped down the field with D.K. Metcalf pulling the strings so fiercely that Darius Slay got drawn into a shoving match.

Darius got slapped with unsportsmanlike conduct. Malik Jackson’s unnecessary roughness penalty helped ease the pressure on Russell’s arm. Unfortunately they could not finish as Derek Barnett broke up their last ditched pass to Moore.

Wentz did no better and after two failed runs, they tried for a throw and got an incompletion. Derek Barnett must have a GPS on Russell Wilson, because he instinctively stopped another attempt at a touchdown forcing a turnover.

Wentz tried to get things going, but found it difficult with the rejuvenated Seahawk defense. Then Wentz got sacked, this was on the third down I might add. Wentz just was not getting any luck.

If it was any consolidation, the Eagles defense gave the Seahawks the same medicine. So, there were no points on the board by the end of the quarter.

Jalen Hurts started on the first snap, made one short pass to Jeffery and then came off. Odd, but Wentz came on only to get his team forced off the field with another sack.

Metcalf kept showing up Slay with a 52-yard burn. David Moore got the touchdown to clinch the seven points.

They continued to use Hurts intermittently, but not to great use. The Seahawks rushed down the field and Chris Carson got the second touchdown making it 14 to 0.

Wentz decided to use his legs and got 20 yards. Things were starting to look up as he started to connect passes like the good old days.

Dallas Goedert caught the pass for a touchdown, Jake Elliott missed the kick making it harder on his team.

The Seattle Seahawks got stalled and the Philadelphia Eagles drove down the field looking to catch up to the Seahawks. All they got out of it was a kick.

The Seahawks got stopped again and turned over the ball. The Eagles came close to some speck of brilliance only for Wentz to get sacked.

D. K. Metcalf kept the train going only for the Eagles to challenge his 19 yard completion. It was upheld and the Seahawks played it safe with a 44-yard kick from Jason Meyers.

The Eagles pushed to get a touchdown, but Seattle’s K.J. Wright made a great play to deflect the ball on their fourth down.

Metcalf slayed up the field and allowed the Seahawks a 33 yard field goal. Two pass interference penalties put the Eagles back in the game though. This was Wentz’s moment and it just became a strange series of blunders. Wentz overthrew his receivers twice, on the third down threw short of the line to Scott, then he threw an interception.

The collective groans of the Philadelphia faithful could have been heard all the way from their houses to the stadium.

Less than four minutes remained. The Eagles started at their 12 yard line, but struggled to get anything going. Jordan Mailata’s holding penalty did not help.

The Seahawks kept up the pressure putting in a field kick. The Eagles were at 9, while the Seahawks sailed at 23.

Wentz tried a Hail Mary meant for Fulgham, but that got dropped. Dick Rod caught his though. So it settled 17 for the Eagles, with the Seahawks at 23.

The Eagles tried an onside kick, but Metcalf caught that haunting them all the way to the end.

Why Has Carson Wentz Fallen?

Ask the Eagles, the reason comes down to a younger team at his disposal compared to what he had previously. Normally this should not be a problem with the best quarterbacks, but Carson is not a grizzled vet, yet.

He is still young and learning to overcome struggles. This would be genuinely his first real struggle and it is not looking so hot for him to make the required changes to make his team a winning team anytime soon.

So when he had a more experienced team, he was on cloud nine. They compensated for his playing style which was optimistic and still rough around the edges. Now, he is standing on his own. On an island, he looks bare and clueless compared to his counterparts.

This will be the biggest test in his career, he has to beat it. The defense did well to hold the Seahawks under thirty, well except Darius Slay.

Darius Slay just got slayed by D. K. Metcalf all day on the football field. Darius Slay was marking him very tight too, D. K. was just having an exceptional day. Dallas Goedert was good, the other receivers, not as great.

Travis Fulgham did not get much love now that I think of it. Fulgham now has two catches. Has Wentz stopped trusting him? Other receivers are getting more playing time and they were not as good as Fulgham is.

Unless that period of dominance by Fulgham was short lived, the Eagles have adjusted for that dying patch of form and shifted to more reliable receivers. It is possible.

Why the Seahawks won

D.K. Metcalf made huge play after play and just kept the Seahawk train rolling down the field even with the Eagles defense doing so well overall. I mean the held the great Russell Wilson to under 30 points. Not an easy feat to accomplish.

The defense also stepped up and won through a lot of pressure. Carson Wentz struggled to stay in the pocket and his accuracy suffered greatly.

Hopefully they can build on this and continue to improve, if they can, they will have a team that will be a force to reckoned with.

Youth Shall Carry The Hurricanes To The Promised Land

Opinion: Could a Biden Presidency be good for the Conservative movement?