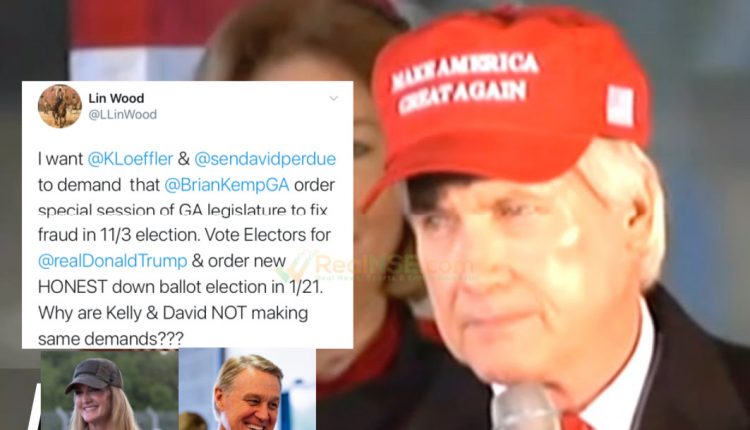 Attorney Lin Wood is helping the President of The United States in regards to the 2020 election and the fraud we are seeing across the nation. Earlier today he and Sidney Powell held a press conference in Georgia – that was absolutely packed, by the way – to talk about the theft of the election.

During the rally/conference Wood got everyone fired up pretty good, getting chants going, teasing a Flynn/Powell Presidential team for 2024. But one of the more serious topics was the coming Georgia Senate runoff election.

Wood said that no Georgian should vote in the Georgia runoff election due to the fraud we saw on November 3rd. I honestly, have a huge problem with that. Telling people to not vote in the coming GA election is extremely dangerous.

If the Democrats get those two Senate seats, they control the Senate. And if even President Trump pulls through on this victory – which I think he will – it would be next to impossible to get ANYTHING passed. That would mean the Democrats have the Senate and can now fully impeach him. Remember, the House impeached Trump, but the Republican held Senate that spiked it.

If they take these two Senate seats, it’s over for the “America First” agenda. Not to mention if Biden gets in. I can’t even imagine what that would look like. A Biden-Harris administration, with a Democrat ran House and Senate? Yikes…

I want @KLoeffler & @sendavidperdue to demand that @BrianKempGA order special session of GA legislature to fix fraud in 11/3 election. Vote Electors for @realDonaldTrump & order new HONEST down ballot election in 1/21. Why are Kelly & David NOT making same demands???

I get what Lin Wood was saying. I totally agree these Dominion machines need to go IMMEDIATELY. In fact, I would go as far as to say they need to be removed before the January 3rd Georgia runoff. But to just blatantly say “don’t vote”, is just so dangerous.

No matter how pissed you are at the Republican Party – If you live in Georgia – you must show up in huge numbers to vote for the two Senate seats. We must win these seats.

I encourage all Georgia residents to vote for the following Republican Senators: