If the election wasn’t rigged, why isn’t Biden calling for audit?2 minute read 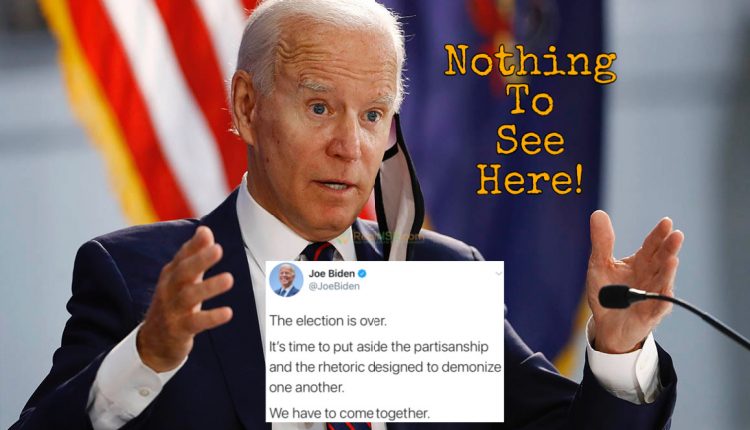 We keep hearing from the left and the mainstream media that the 2020 election was not rigged, and there was no voter fraud. But why isn’t the so-called “winner” welcoming a full vote audit to show us his victory?

Major lawsuits are underway in key battleground states regarding election fraud. We also have hundreds of affidavits from witnesses that swear – under the threat of perjury – that they saw all sorts of wrong doings from ballots being dropped off, to unidentified badge-less people coming in and sticking USB drives into the voting machines and leaving. It goes on and on.

I’ll say it again, despite the media and Democrats parroting “there’s is no evidence”, sworn affidavits are viewed upon as evidence in court.

The election is over.It’s time to put aside the partisanship and the rhetoric designed to demonize one another.We have to come together.

Under the constitution, the President is well within his rights to call for vote audits and recounts. Furthermore, the electoral college does not vote until December 14th. Joe Biden is not currently President-elect. Nothing is official.

The Game Is Not Over. Here’s What the Supreme Court Needs to Do Without Ambiguity

The Supreme Court needs to define without ambiguity what a legal vote is. This will assure the legitimacy of this election and also future elections-Availabl…

So when Biden says “the election is over” and is rushing to move on, that is extremely suspicious. Instead of welcoming investigations to verify his “victory”, he decries the President’s attempt to ensure the security of our election and that all legal votes are counted.

It poses the question, what is he hiding? What does he want to keep undercover?

Despite overt political pressure from the president, over the last 24 hours, MI, PA, and NV certified their results and the GSA began the transition. Still, President Trump has not conceded.Here’s the latest from my Senior Advisor and former White House Counsel Bob Bauer. pic.twitter.com/BvZEwI1hoH

Roy Jones Jr. says Anderson Silva could be next fight after Tyson