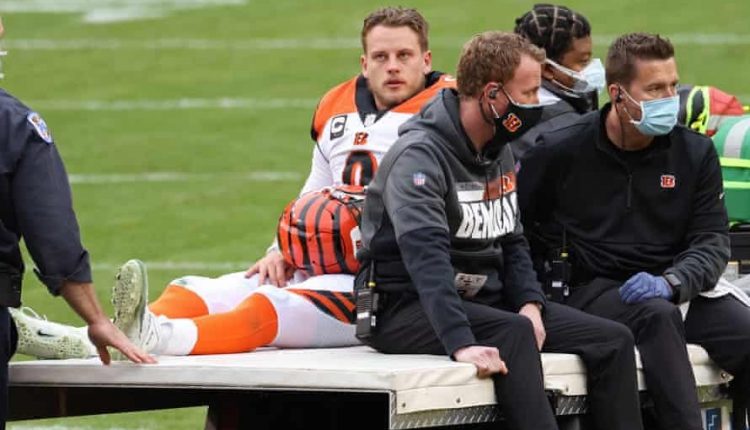 The Bengals must have a curse on that open dome field, because you cannot write drama this good. You could try, the Bengals reality show would beat you in ratings. Its official, the below average offensive line failed Joe Burrow on Sunday.

The rookie season of Joe Burrow is over. The MRI showed Joe Burrow suffered a torn ACL and MCL in the left knee.

One is bad enough, two of them could be career ending if managed poorly. Naturally that is not in the thought pattern. He should have the best medical advice going forward on how to deal with this injury.

A torn ACL and MCL, the recovery time is at least nine to 12 months. The 2021 season will be his anticipated comeback.

So what now? We could insult the staff and organization to the very ends of the earth, but that will not change anything.

Also, anyone asking for heads of the staff to roll need to realize two things. This is the Cincinnati Bengals. The organization notorious for its slow speed and right now, most good coaching staff would stay far away from the organization.

The only thing that would make them want to apply to work for the Bengals would be Joe Burrow and star studded receiver core. They just lost Joe Burrow and with uncertainty about his return to optimal performance, most would stay clear.

So, should Zac and the manager be fired, yes, will they be fired in this climate, no.

Burrow injured his left knee when Jonathan Allen was pushed accidently into his leg while defensive end Montez tackled him. Both are of the Washington football team.

The team’s medical staff rushed to the field to assist the pain ridden quarterback. Burrow was eventually helped up into a standing position. The cart came anyway and he was laid on it for better support.

The Bengals team congregated around the quarterback. Many had mixed feelings, the pain Burrow permeated throughout the field and stadium.

Burrow had 203 yards before the injury. Joe Burrow was the future, he made the fan base believe again.

Those hopes were dashed in a flash, in a moment, a terrible one at that.

Cincinnati had different offensive line group on that day, showcasing they still do not know who should play and who should not.

Burrow was sacked 32 times, the third most. He was not sacked prior to the injury, but he took a lot of hits after the throw.

It happens a large amount as it was, so something bad was bound to happen. It did on that day.

Ryan Finley finished out the game to a disastrous beating from the Washington team.

Burrow was not too negative about it. He tweeted that he was not going down so easy.

Thanks for all the love. Can’t get rid of me that easy. See ya next year✊

His optimism is rather infectious even though most fans are angry and distraught right now. What will be interesting is next season. Right now, It has been declared that Brandon Allen will be leading the team as quarterback from now on.

He played college at the University of Arkansas and has been shopped around for a while now. He only has played a few times and it is nothing to write home about either. So expect losses galore until the end of the season.

That means the Bengals can contest for the number one overall NFL draft pick. The question has to be asked, who will they pick? Right now, the receiving core is fine, unless they want to not resign Green and get another prospect. He would not need to be first rounder, maybe second round.

To not resign Green sounds like blasphemy, but guess what, Green is great, but not at his best. He is slowly going down that hill. It would be the best time to trade him (something the Bengals organization hate to do). Offload Green’s heavy contract and draft one receiver, one tightend.

Anything other than exceptional would be an insult to Joe Burrow’s recovery. So will they do it? No, the organization has a habit of doing as they please and what they usually do tend to backfire and turn out badly.

The Bengals are not known for their draft picks benefiting them very well. The Bengals have tanked for years and failed to make use of their tanking to make a dream out of the favors the NFL gods bestow unto them.

Next season will be no different in my opinion. Mediocrity will continue unless they make a change and like a whiny baby, they just do not want to change. Hopefully when Joe returns, he can make a mountain out of the mole hill that is the Bengals.

Carolina Panthers Locked Out the Lions

Roy Jones Jr. says Anderson Silva could be next fight after Tyson