The Broncos Beat the Dolphins 20 to 135 minute read 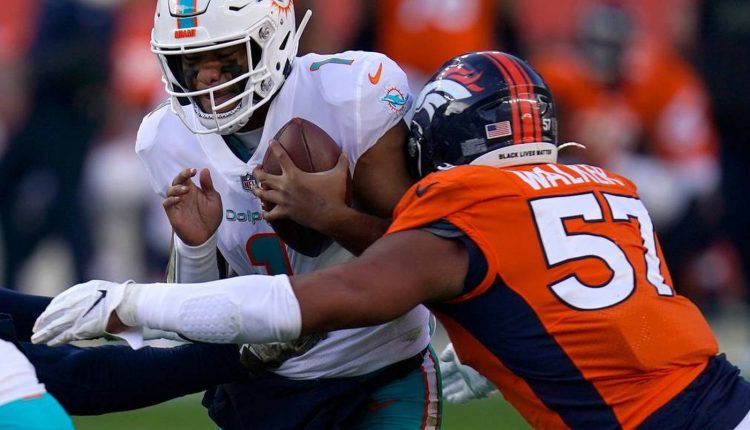 The Miami Dolphins take on the Denver Broncos during Week 11 of the 2020 NFL season.Subscribe to NFL: http://j.mp/1L0bVBuCheck out our other channels:Para má…

The Broncos had a poor start, an interception included, but they fought back to winning ways and came out on the other end of the match, winners.

The players that showed up for the Broncos on the day were Drew Lock who got 18 out of 30 for 270 yards, Phillip Lindsay had 82 yards from 16 carries. Gordon got 1 TD and has 84 yards from 15 carries, Justin Simmons, Malik Reed got 1.5 sacks. DeShawn Williams got 2 sacks.

The players that showed up for the Dolphins on the day were Xavien Howard and Ryan Fitzpatrick.

The Broncos Edge One Out

Many were surprised the Broncos won. Drew Lock has not come back from his injury swinging as expected. Even in the last match, he was booed off the field for his poor performance.

Was it bad, yes, he threw four interceptions in a 37-12 loss to the Raiders. He had complained about pain in his ribs area, but you know how some fans are.

Lock said as much in the interview. “This was a game that was pretty much chalked up before we even played it. In a lot of people’s eyes there was no way we were going to be able pull this one off. That’s just typical NFL football.”

The Broncos almost lost the game though because of a mistake by their running back Gordon. He fumbled just before going for a laid to bed touchdown in the fourth quarter.

This gave Miami another chance, but Justin Simmons crushed that chance with an interception in the end zone.

The rookie quarterback Tua Tagovailoa had 11 of 20 for a measly 82 yards. That is bad. So much so, he was benched early in the fourth quarter.

You can guess one had to fall for another to rise. It should be noted that though Broncos offense is limping right now, the defense is not. They have missing some pieces, but they are still deadly.

The Broncos defense sacked Tua Tagovailoa 6 times. DeShawn Williams got two, while Malik Reed got credit for 1 ½. They made it hard for him to get any good ground.

Fitzpatrick helped cut the deficit down to 20-13 with a kick. He then drove Miami from its own 3 yard line to the Broncos red zone, only to get picked off in the end.

Fitzpatrick still got it, not that he will be taking back the reins anytime soon, unless Tua Tagovailoa does not improve in navigating the pocket under pressure.

The Broncos improved to 4-6. Which is not exactly good for a team that should have been destroying their opponents, alas the injuries have derailed them since the start.

The next game for Denver is against the New Orleans Saints. They will need to lean on their defense for that one. If Lock can stay consistent then this match can be another win in their back pocket. How they will develop this team going forward will be interesting though.

This season is a bust unless they go on a long winning spree which is very unlikely. They can take this L move into the draft with options to improve upon the team they have. Defense is great, it is only the offence that needs work.

Another thing to think about, is Lock okay to continue as the quarterback? I know to ask that right now seems like blasphemy, but considering the flooded market of great QBs right now and coming in the near future. It would not be a terrible idea to get a new one.

Lock will need time to get back to his good form. He seemed jittery out there even when there was no pressure and he might be afraid of getting injured again.

That is an understandable fear, but it can also hamper his production. He stepped up on that day. His team believes in him.

Postgame: Broncos running back Phillip Lindsay said the team came with attitude against the Dolphins

Broncos running back Phillip Lindsay said the team came with “attitude” against the Dolphins and that the key is remaining consistent with the run game.

Lock is a strong individual and he will be fine for now, but he has to raise the ceiling of the team if he is going to be staying there longer than two years.

No, don’t write-in Donald Trump in the Georgia election runoff

Joey Davis: The Future of Bellator