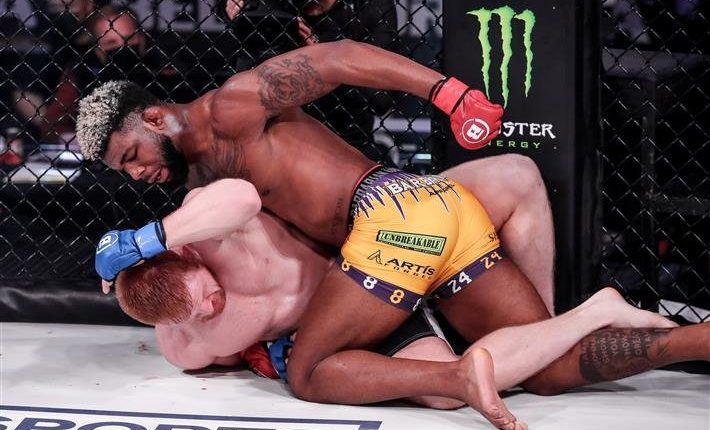 Joey Davis is feeling good about his prospects in the sport of MMA and for Bellator. When Coker talked about new direction, it was likely about promoting the young into the promotion and using them to lift the organization up with it.

It’s been a long time the Bellator has been the little brother to UFC and its time for it to come out of its shadow. Joey David can help them in that area. He fights in the welterweight position and has a streak of 8 wins as of speaking.

He also has a good image and fans like him. His last fight was at Bellator 253 where he met Bobby Lee who is no novice in MMA with 16 matches under his belt, 12 were wins. But Bobby Lee was a novice to a Bellator ring and Joey gave him a warm welcome to Bellator dropping Lee on his back with a great takedown.

He is a Team Bodyshop rep and has proved himself to be a fantastic representative for his promoter and his city. Compton, even though he was born in a position where there is this expected pressure to go down a certain path.

He rejected that and went his own way. Taking up wrestling and achieved masterful greatness at the college level. He attended Notre Dame College of Ohio and went on an undefeated stretch. A four-time NCAA Division II champion, he was the third person to ever accomplish that feat.

“It’s tremendous because all I try and do is put on for the inner-city kids and let them know that dreams do come true and people are watching you if you’re willing to work for it and that’s all I’m about. Whatever you believe in, you can achieve, and I’m really proud of my performance and putting it on for the city of Compton.”

With his accolades piling up, it is no surprise that he has been forthright with trying to prove how good he is. He wants to take on anyone who thinks they can test him. He wants a chance to be the best. Well, he has the attitude and the resume.

His record goes as follows:

Most of his decisions are by knockout and granted that makes for a more entertaining end to his matches, but a background in wrestling you would think he would have more submissions. It is not that he cannot takedown opponents.

From watching him, he can definitely do that and rather well. Countering off attacks and making takedowns from odd spots no one would expect. But he does lean on his strength and fighting skill more when it comes down to it.

Polishing his grappling ability will do wonders for him to reach the next level of the sport.

So will he become the best in the world as he proclaims? Anything is possible and naturally the way he is cutting through Bellator’s finest his time will come, sooner rather than later.

The Broncos Beat the Dolphins 20 to 13

Has Mike Perry Loss the Plot?