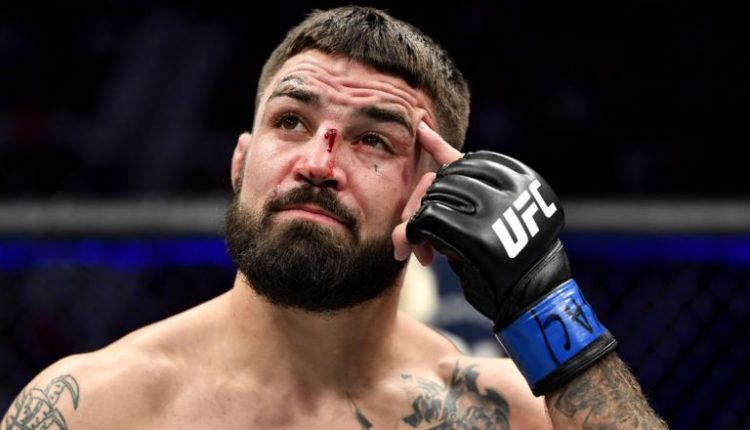 Mike Perry is a well-known in the welterweight category of the MMA fighting sport. Well, he got one of the worst beat down of his career against Tim Means. It was never supposed to happen either, Perry had filled in on short notice for the injured Robbie Lawler.

Tim Means displayed a strong performance against Mike Perry with his kickboxing. Perry got the bitter end of a busted nose and that was all she wrote.

Means earned a unanimous decision victory for his strong display. But even Means had to admit, “I did my best to hurt him but he’s a tough ass dude. He got my attention and I wanted to get my hand raised.”

Mike Perry started with a takedown. If you think it caught Means off guard, it did. Perry nearly got a rear-naked choke, but Means got to his feet.

Means kept stepping into Perry’s space and tried to connect with swift combinations to throw off Perry’s flow.

They went at each other, Perry throwing haymakers, Means throwing jabs and straight strikes. It was in the last two minutes of round 3 where things got heated. There was no pretense of strategy as they unleashed hell upon each other.

Mike Perry Reacts to loss to Tim Means at UFC 255

Means came out walking at the end of it, while Perry laid on the ground bleeding from the nose profusely. Perry, right now is not feeling too good as he failed to make weight pre-fight and loss in that bout.

His record is now at 7-7 overall in the UFC at least, not bad, but not good either. He has a longer rap sheet than that though, for he has fought on many other stages and in other promotions. From Battleground to Premier Fighting to World Class Fight League, even though most are championships compared to your regular promotion fight ring, he did to get UFC’s notice.

And it was a lot of notice too, as except for his first fight, he has been winning non-stop until he reached the UFC.

On a lighter note, many fans have said, the walkout song might have sang his defeat. Which walkout was it? Halo, by Beyonce. Yes, we kid you not, but do not worry, it was a mistake in actuality.

If you watched it back, you can see the look of surprise on Perry’s face. He just brushed it off and sang along while he walked out.

At this point, no one knew what Perry’s song was supposed to be. Then again knowing Perry, it could be said that he did chose that song and feigned surprise as a joke. Perry would have hoped Beyonce’s voice lifted his fighting spirits, too bad Means smacked that back to the ground.

Perry also had another amusing moment going on when he tried to sell his corner spot on social media. Guessed there was no sale, because his pregnant girlfriend and member of his team stood in his corner.

Thank you @ufc for everything. You guys always looking out. Everybody have happy holidays ! ✌️

Right now his antics and bad luck might make him a fan favorite, but he has some issues outside the cage that do have many scratching their heads and looking at him with side eyes.

It is not like he has a winning record and that will affect the next time they will want to resign him. There are many rising good fighters out there. Unless he is a winning fighter, the UFC can take a risk to not resign him or not match him up anytime soon.

The tweet has a underlying tinge to it that says enough. He probably knows his favors are wearing thin with the UFC. Trying to make people love him more again, I guess?

Personally, the antics are nice and all, but I think what will keep him in UFC’s good grace is becoming a better fighter. He will have to improve if he is going to stay toe-toe with the best in the UFC, but we do not think his story is written yet.

There is definitely more to come for him.

Joey Davis: The Future of Bellator

Carolina Panthers Locked Out the Lions