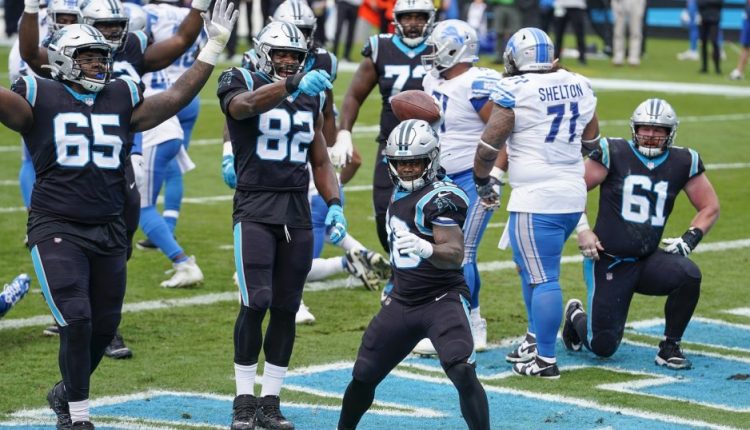 The Carolina Panthers have been having a bad season for a good while, but so are the Lions. A close match was expected. Then the Panthers said, nope, we will just shut them out and they did. The Caroline Panthers beat the Detroit Lions 20 to 0.

The Detroit Lions take on the Carolina Panthers during Week 11 of the 2020 NFL season. Subscribe to NFL: http://j.mp/1L0bVBu Check out our other channels: Pa…

It was the first shut out for the Lions in 11 years, by a backup QB from the XFL in his first start. Let that sink in, good, now let’s get to the how.

The players that showed up for the Lions on the day were cornerback Amani Oruwariye five tackles, one INT.

The Panthers started off first, but were forced to punt.

Adrian Peterson made some headway for his team, but they punted as well. The Panther did not disappoint and scored through Mike Davis after D J Moore caught a 52 yard pass to bring them within the red zone.

Bad luck reigned as a bad snap ended the Lion’s drive. Panthers got the ball with under a minute left, but nothing came of it though.

The Lions and Panthers went back and forth for several minutes as their defense worked their pay.

Just over four minutes left in the second quarter, the Lions stalled the Panthers again.

The Stafford pushed up the field with an 11 yard pass to Hockenson, Johnson contributed, but the Panthers finally remembered how to defend and stalled the drive.

The PJ Walker struggled to get things going and they punted. The Lions had 5 seconds left, so Stafford just took a knee. At the half it was Panthers 7 to Lions 0.

The Lions came out looking lethargic as the Panthers forced their ninth three-and-out. Naturally, the Lions punted.

P J Walker surged down the field connecting pass with runs and finishing with a 17-yard pass to Samuel in the end zone. It was now 14 to 0.

The Lions tried to make a comeback, but they lost a chance at a 51 yard touchdown because of an illegal formation penalty. They had to punt in the end.

P J Walker was moving up the field, but got caught out by the Lion’s defense making it hard for him. On a third down, they called for the kick team. The kick was good and they got up to a 17-0 lead, all thanks to Joey Slye.

Stafford tried to push up the field, but only enough for a field kick. Matt Prater was the hero last game, he was not in this one. He missed that attempt by a lot. The Panthers tried for another attempt to score, but failed to get anything going.

The Lions got back the ball and then Stafford got sacked. Guess what, another punt was kicked. The Panthers failed to take advantage again.

The Lions rushed up the field with the goal of not being embarrassed with a shutout. They stopped at Carolina’s 25 and tried for a touchdown only to get nothing out of it. The Panthers defense just was not going to allow it.

Panthers made nothing out of the next drive and Stafford had little luck on the subsequent one as the Detroit defense got serious about making sure the shutout was in tact. So Stafford got sacked back to back forcing a punt.

Slye’s gave Panthers a 20 point lead with a 37-yard field goal. Lion’s cornerback Jeff Okudah was hurt just before and taken off.

The lions got itchy and then a bunch of penalties ended their disgraceful game as they loss 20 to 0.

How the Carolina Panthers Won

The team celebrated like they just won a conference championship, but after a five match losing streak. A shutout win really boosted morale and lifted a load off their shoulders.

Bridgewater was standing alongside his teammates. He was out of uniform, but he was there for his team watching them in support.

The Panthers offense was ran well by P J Walker who kept stepping up touchdown drives against a rather good Lions defensive performance.

Funnily enough PJ Walker did not get the job immediately. He had to win it in training against Will Grier.

He did well, but he is rough around the edges. He did throw two interceptions, all in the end zone. That might indicate a mental inconsistency. Does he struggle under pressure maybe?

I wish there was more time to see him in action will have us see if that was a brief moment of unfocused play or a pattern.

Teddy Bridgewater is expected to return against Minnesota Vikings, so ends Walker’s run for now.

I didnt like the hire originally in 2018, and now in 2020 I’m honestly wondering when Matt Patricia will be fired. Today’s loss to Houston didn’t look great….

The lion’s lost was bad. To go up against the worst third down defense since 1972 and then get shut out by said defense like that is a dreadful feeling. Neat fact, Tennessee Titans take care over the lead for terrible third down now thanks to this victory.

Many Lion’s fans are decrying the loss to be blamed on Stafford slight right thumb injury and the fact that they were without running back D’andre Swift, wide receivers Danny Amendola and Kenny Golladay.

It showed as there were 14 dropped passes in that one match alone. Stafford must have been cursing his bad luck to be shackled with such bad receivers at his disposal.

The Lion’s defense was not bad and honestly they could do no wrong considering how bad the offense was. This was not the Lion’s more than it was the backup receiver core’s lost.

Their next match will be against Houston and with things as they are now. We can expect the Texans to give the Lions a pounding. Who knows though, maybe Stafford can make miracles or the backup receiver core get better after the shouting they got in the locker room.

Has Mike Perry Loss the Plot?

The Cincinnati Bengals Can’t Get Right