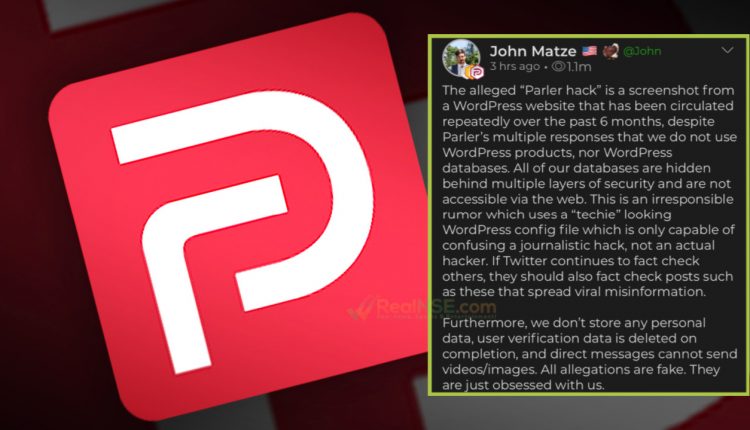 For most of Tuesday, Twitter allowed #ParlerHacked to trend despite it being false. Parler was not hacked. And it was very easy to find the truth. The CEO of Parler John Matze released a statement explaining that Parler was not only not hacked, but the screenshot that was passed around wasn’t even of their server!

The alleged “Parler hack” is a screenshot from a WordPress website that has been circulated repeatedly over the past 6 months, despite Parler’s multiple responses that we do not use WordPress products, nor WordPress databases. All of our databases are hidden behind multiple layers of security and are not accessible via the web. This is an irresponsible rumor which uses a “techie” looking WordPress config file which is only capable of confusing a journalistic hack, not an actual hacker. If Twitter continues to fact check others, they should also fact check posts such as these that spread viral misinformation.

Furthermore, we don’t store any personal data, user verification data is deleted on completion, and direct messages cannot send videos/images. All allegations are fake. They are just obsessed with us.

Many blue check mark accounts and lefties were celebrating the fact that this free-speech platform may have gotten hacked and exposed. Too bad for them the story is FALSE.

As of 11:32 PM EST Twitter still has the fake news story hashtag #ParlerHacked up.

Media says there is no proof of fraud. They’re right. But here is why!