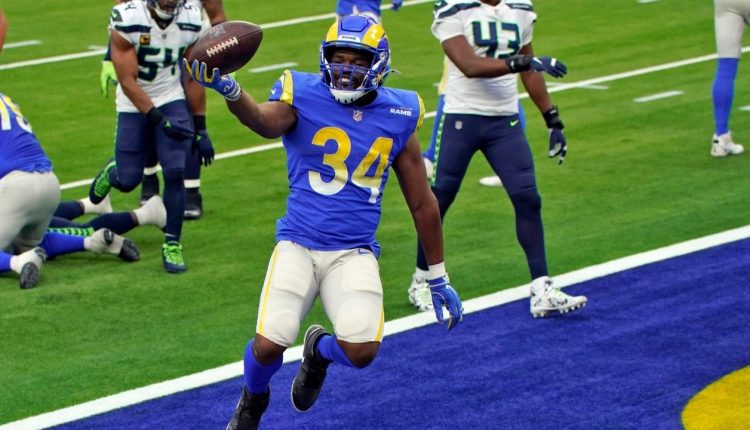 The Seattle Seahawks take on the Los Angeles Rams during Week 10 of the 2020 NFL season. Subscribe to NFL: http://j.mp/1L0bVBu Check out our other channels: …

The LA Rams got one over on the Seattle Seahawks beating them with a secure 23 to 16 victory. It was one of the few times the Seahawk offence was not bombing the walls of an opposing defense.

Still, for their efforts a Rams lost Andrew Whitworth to a torn MCL. He will return, but it will be late in the season by then. The Rams have to continue their campaign to get to the super bowl.

The 37-year-old has been a stalwart starter for the Rams. He got drafted by the Bengals originally.

But found his way to Los Angeles. This is a huge blow to their offensive line protection and it will be interesting to see who will replace him. Joe Noteboom, replaced him in that game specifically, but will he play in the next match? If not him, the other most likely candidates are Tremayne Anchrum and Bobby Evans.

Both are young and inexperienced, one is a rookie, the other is on his second year. Not exactly the best replacements right now. Joe Noteboom has some experience and should retain that spot for the time being.

The Rams have improved to 6-3, while the Seahawks have the same record.

So What Really Happened?

So the Rams had one job. To stop Russel Wilson’s offence, they did, to a small extent, but it was enough. Russel had a bad day it must be admitted. Worse to have thrown his third interception on a possible game winning drive, that had to have hurt.

Props must be given to Darious Williams for the fantastic play, because that was his second pick of the day. The Rams corners did a good job suffocating Russel’s passing options. DK Metcalf got his first catch in the third quarter just to illustrate how bad it was.

Russel also struggled to get time on the ball. Leonard Floyd and Aaron Donald among others put on immense pressure on the Russel Wilson all game. Russel was sacked a fair amount and struggled getting free to do his signature runs.

The Rams offence also cleaved through the Seattle defense. They rallied 108 rushing yards and averaged four yards per carry in a tough display of power. Their passing game was not to be ignored and Goff was back to the efficient style he been known.

Screens and bootlegs terrorized the Seahawk defense for hours. Goff did well and proved, reliability goes a long way.

The offense is good, not great. It is the Rams defense we are really writing home about. Funny, the Rams once upon a time were a feared offense, while the Seahawks were a feared defense. Not the roles have switched.

Their options at receivers are good, but there are no elite exceptional talents to speak about. Goff is smart, reliable when he follows the plan, but if the plan falls apart and he was relied on to extend the play or make lemonade of out lemons the Rams fans would die of thirst.

That may sound harsh, but this happened before. Remember the super bowl where the Patriots made Goff and the Rams play on Patriot’s terms? Goff did not make lemonade on that day. Goff has become more mature since then, but he has not improved much on his technique. It is probably more refined now.

That can probably be enough to win a super bowl and he definitely can with this defense.

It should be noted. Defenses have won super bowls ask Payton Manning. So, there is hope for Goff and LA fans. But they have to let the defense do majority of the work. Goff’s job will be to drive the car like he did In this match.

We already know Goff cannot be spectacular. He can be reliable, but it is in those moments when he is under pressure, (like in the Dolphins lost) that he crumbles.

In that Dolphins lost, he got two passes intercepted, fumbled twice for good measure.

Goff needs to be more solid and resilient in front of adversity. His team is saving him too often, not the other way around.

Right now McVay is mixing up the attacking options with three running backs Cam Akers, Malcolm Brown and Darrell Henderson along with their receivers. So they lack exceptional talent, but they have a exceptional coach and play caller.

All they need now is a great field commander, that can be Goff if he takes the responsibility. It is the only way he will become a quarterback his team can rely on.

One point of contention, the Rams need a new kicker. Forbath cannot be missing a minimum of one kick in eight games. That would be a huge help to their offense.

Next match, the Rams take on the Tampa Bay Buccaneers, a tough match. Then there is the 49ers, a even match and the Arizona Cardinals where anything goes.

Their defense needs to get it together. The Seahawks have allowed the second-most yards in NFL history. That lost should not have happened if the defense was just merely average. They were bad. The Seahawks mostly play coverage defense, but the busted coverages that I saw indicate either the instructions the coordinator are giving are too complex, confusing or there is bad communication between the players.

I cannot be exactly sure, but the defensive calls are troubling. Some were just too obvious and offenses seem to be getting hip to the Seahawks defensive calls.

That would be on the defensive coordinator then.

Regardless it needs to be fixed. Russel Wilson is playing so well out there. It feels like you are throwing a milk that costs one million dollars when you have such great talent on paper and you cannot get them working together very well.

The Seattle Seahawks have a favorable schedule to be happy about and will likely take advantage of it. Now would be a perfect time for this defense to gather that chemistry together and hash out their issues if they are any.

Their pass rush is fine right now thanks to Dunlap and Adams. Benson Mayowa will be hoping to get healthy.

Seattle during the Legion of Boom days has been known for their rushing offence led by Lynch. Chris Carson and Carlos Hyde are out now and teams know the Seahawks cannot run the football.

So defenses can comfortably play deeper and lock out his receivers like the Rams did in this game. Play-action also suffered, because no one believed it.

We will see if they can fix things, because Russell cannot save them forever.

The Chaotic NBA 2020 Draft Rolls By