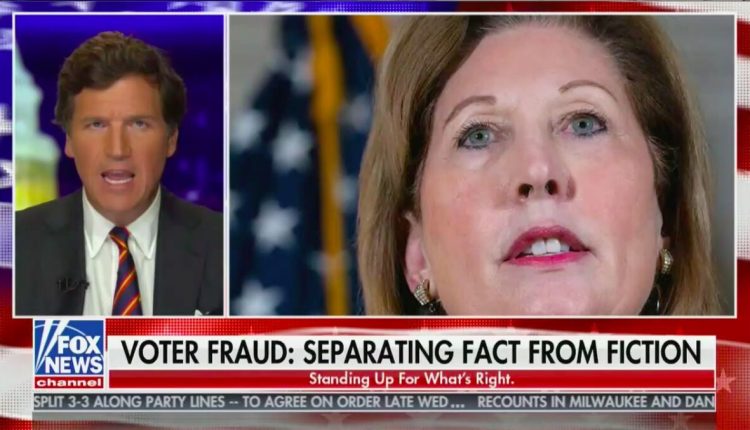 After the Trump legal teams press conference on Thursday, Fox News’ Tucker Carlson called out Sidney Powell, a member of the Trump team. Many conservatives are upset with Carlson and in fact calling him a sell out. But is that fair?

Let me begin by going over what Carlson actually said during the segment.

“We invited Sidney Powell on the show. We would have given her the whole hour,” Carlson said. “But she never sent us any evidence, despite a lot of requests, polite requests. Not a page. When we kept pressing, she got angry and told us to stop contacting her.”

This is just an excerpt of what Tucker Carlson said on the topic. The full segment is below…

Honestly, I only have issues with part of what Carlson said. People are acting like he said Powell has no evidence, or that he doesn’t believe her, which he did not. I do however, disagree with his argument that no evidence was provided. Powell responded to Tucker Carlson on Mario Bartiromo`s Fox Business’ show on Friday. She stated that she tried to provide Tucker with new affidavits – besides the already 200 or so that have already been talked about – but he didn’t want that.

SidneyPowell Responds To #TuckerCarlson Election2020 “He Was Insulting, Demanding and Rude and I Told Him to Never Contact Me Again” – Sidney Powell Goes of…

As Trump’s legal team keeps telling everyone, affidavits are considered evidence in a court of law. So to say that there is no evidence of election fraud or vote switching is absolutely false. Now, Tucker may have been looking for something exclusive for the show, but I completely disagree with him that she did not offer any evidence.

I think people are overreacting to this. Tucker Carlson has the most viewed cable news show in history for a reason. That’s because he is one of the very few real news anchors left. He has exposed a lot of things in the past and has been a great voice for conservatives. We shouldn’t be so quick to dismiss or abandon him.

The Chaotic NBA 2020 Draft Rolls By