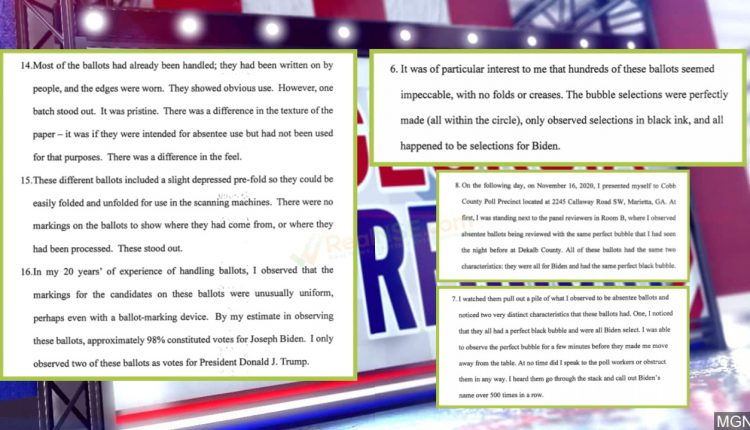 Hundreds of sworn affidavits are coming in from ballot counters and ballot monitors in many different key battleground states that are revealing some damming information.

I will be combing through each of them to highlight the most important. But let’s look at a few coming from Georgia.

Ivan Pentchoukov of the Epoch Times found some shocking admissions from a number of the affiants.

Fulton County, Georgia: A ballot worker for the recount, with 20 years of election experience swore to the following:

15. These different ballots included a slight depressed pre-fold so they could be easily folded and unfolded for use in the scanning machines. There were no markings on the ballots to show where they had come from, or where they had been processed. These stood out.

16.In my 20 years’ of experience of handling ballots, I observed that the markings for the candidates on these ballots were unusually uniform, perhaps even with a ballot-marking device. By my estimate in observing these ballots, approximately 98% constituted votes for Joseph Biden. I only observed two of these ballots as votes for President Donald J. Trump.

6. It was of particular interest to me that hundreds of these ballots seemed impeccable, with no folds or creases. The bubble selections were perfectly made (all within the circle), only observed selections in black ink, and all happened to be selections for Biden.

7. It was also of particular interest to me to see that signatures were not being verified and there were no corresponding envelopes seen in site.

Dekalb & Fulton County, Georgia: Another poll worker says they saw many issues with the recount in Georgia:

6.1 [I] was allowed to be an observer and walked over to a table of two women counting votes.

7.1 [I] watched them pull out a pile of what I observed to be absentee ballots and noticed two very distinct characteristics that these ballots had. One,I noticed that they all had a perfect black bubble and were all Biden select. I was able to observe the perfect bubble for a few minutes before they made me move away from the table. At no time did I speak to the poll workers or obstruct them in any way. I heard them go through the stack and call out Biden’s name over 500 times in a row.

8. On the following day, on November 16, 2020, I presented myself to Cobb County Poll Precinct located at 2245 Callaway Road SW, Marietta, GA. At first, I was standing next to the panel reviewers in Room B, where I observed absentee ballots being reviewed with the same perfect bubble that I had seen the night before at Dekalb County. All of these ballots had the same two characteristics: they were all for Biden and had the same perfect black bubble.

Fulton County, Georgia: Another recount observer says they saw similar perfectly bubbled ballots as well as many boxes of ballots that were 100% for Biden:

2. I was at the World Congress Center on Saturday, November 14, 2020. I was certified as a Fulton County recount observer. I observed many boxes of absentee or mail in ballots being counted. Many of the boxes of ballots had voted for 100% for Biden and 0% for Trump. The ballots appeared to be perfectly filled out as if they were pre-printed with the presidential candidate selected. They did not look like a person had filled this out at home. All of them looked alike. Me and the other observers wrote down which batch headers and box number ranges were suspicious. I have created a spreadsheet with the list of batch headers.

The horrifying observations continue on. This is just the tip of the iceberg. For those who wanted evidence of election fraud, here it is! As Rudy Giuliani has stated numerous times, these sworn affidavits are considered evidence in a court of law.