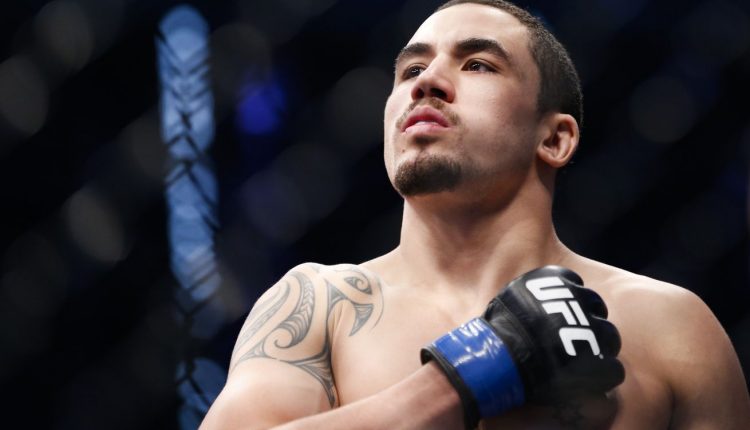 Robert Whittaker is a popular MMA fighter and is highly respected and praised for his accolades in the middleweight division. At 29-years old he holds a terrific record of 23-5-0.

One thing is on his mind though. He wants a chance at the belt. Dana White has other plans. Whittaker won two matches against Darren Till and Jared Cannonier since losing the middleweight title to the division’s reigning champ Israel Adesanya.

Robert Whittaker on Adesanya/Blachowicz, Moving Up to 205 For Adesanya Rematch, Dana White

White announced that Adesanya would be challenging light heavyweight champ Jan Blachowicz, but the thing that really peeved Whittaker was this next statement that he turned down the fight with Adesanya.

“He twisted my words around. I think because he had his own designs and the UFC—When I say ‘he’ I mean him and the UFC as an organization, I understand that Dana White doesn’t personally want to do things. Or maybe he does, who knows?—but I think they wanted [Adesanya vs. Blachowicz]. That’s a money fight for them. That’s a fight they wanted to push and that’s the only reason I can see that.”

Whittaker told White he wanted the fight, just not around Christmas. It seemed White might have used that as a ‘no’.

Whittaker then talked about the anger he felt, because of the unfairness.

“This sort of stuff just shoots me up the wall,” Whittaker said. “It’s a part that I do hate about the sport. I hate all these political sort of ploys and plans and I just hate it. It’s such a pain in the ass. I’m a fighter. I’m a warrior. You put me up against an opponent, you tell me to fight this guy, I’m happy to do that.

“Don’t get me wrong, I’m not a thug, I’m not just a dude that wants to go bruising and just fighting people. But I am a warrior. This is what I do, this is my trade. I don’t like dealing with all that. It’s supposed to be very straightforward. That’s why the rankings are there, that’s why there’s a ladder. It’s supposed to be very simple, but it’s not.”

It would not be hard to believe that Whittaker hates the politics and circus show vibe. Dana White praised him once and even alluded to his aversion to being a media entertainer.

“If you look at the fights he’s fought, this guy is good. We’ve got to beat him over the head with a stick to get him to do media, and things like that. He’s just not that guy. Eventually, you keep running through people and keep winning, and he’ll get the respect he deserves.

Robert Whittaker returns to Ariel Helwani’s MMA Show while quarantining to recap his win vs. Jared Cannonier at UFC 254. (8:41) Whittaker gives his thoughts …

Robert Whittaker is one of the toughest guys to set in the octagon. He has fought back many injuries, mainly the ones affecting his knee. It is widely known he fought inside the octagon while being injured. Very few fighters do this for good reason.

It is as Whittaker said, he is a warrior. Warriors fight anywhere and anytime. That is how he would interpret that. He is a fighter that is noted to overcoming his injuries. He has a passion and perseverance that is amazing.

Because of this, it took some time for Whittaker to find his footing in the UFC. He started out at welterweight before making the jump to middleweight where he had way more success.

Though with Adesanya leaving the middleweight position, will Whittaker follow him to light heavyweight? He would, but that seems unlikely right now.

The earliest fight won’t be until March 2021 and other fighters might take a shot at that title before him. He will possibly be facing a different opponent. That will not matter to him either.

“There is no fight that interests me other than a title fight of some sort,” Whittaker said. “I’ve earned it. That’s my right. That’s the next step for me, that’s the interest. Apart from that, not really.”

Regardless of what happens we know Robert Whittaker will be become an exceptional fighter soon to be praised as one of the best the UFC has ever witnessed.

The Washington Football Team Will Be Fine