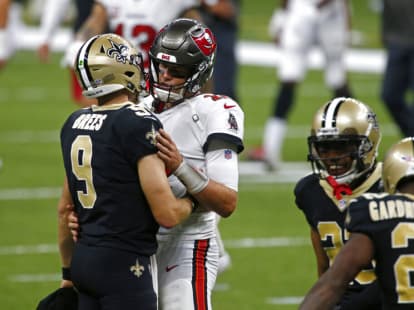 The Buccaneers only got 3 points in a scorching 38-3 loss. Those 3 points came from their kicker Ryan Succop. Worse part, it was o primetime TV. It was a good look for Brees, not for Brady.

Bruce Arians called it uncharacteristic and tried to alleviate fan fears. “I don’t think our confidence is shaken one bit.”

The players that showed up for the Saints on the day were Drew Brees who racked up four TD, Jordan Whitehead got a forced fumble, Taysom Hill was instrumental doing everything from rushing, receiving, throwing passes, Devin White led the team with 14 tackles.

Donovan Smith’s holding call and many more incompletions later Brees came back on and Deonte Harris came close to getting the touchdown.

The Buccaneer’s defense finally made an impact causing a forced fumble. You can thank safety Jordan Whitehead for that.

Problem, the Buccaneers did not make that turnover count either. Brees passed to Adam Trautman for a touchdown

Taysom Hill made some key plays. First a 21-yard grab, then a 23-yard sprint, Emmanuel Sanders finished it with a diving touchdown to put them up by 21 points.

They never got a first down until three-and-a-half minute into the second quarter.

Then DT David Onyemata intercepted a Tom Brady pass that was tipped by DE Marcus Davenport.

Hill rushed down the field. Kamara rushed in to make it 28-0.

The Buccaneers after that rose out of the grave the Saints were digging for them and drove down the field with passes to Godwin and Antonio Brown, but they were not able to clinch a touchdown.

The Saints tried to get another touchdown, but Mike Edwards deflected the ball aimed for Cook. The Saints got a field goal instead.

Brady tried again, but was intercepted by Marcus Williams.

The Saints kneeled twice to end the half.

Brees fumbled the ball after a big hit and it was almost returned for a touchdown. The buccaneers tried to finish it, but they eventually turned the ball over on downs. New Orleans tried to take advantage, but only came close enough not to turnover next to their endzone. They punted.

Tampa Bay tried to push down the field, but Trey Hendrickson sacked Brady on consecutive plays. Brady threw a dangerous pass to Gronkowski, but the danger was realized when Malcolm Jenkins intercepted it.

The Saints got a touchdown thanks to Hill both for the touchdown and conversion.

Succop came on kick the field goal with six minutes left. Former Buccaneer quarterback Jameis Winston finished the game, a trio of kneel-downs to punctuate the overall reality of it all.

The Buccaneers struggled to get anything going as the New Orleans Saints defense did their job.

There was another fumble that led to a return of 41 yards by safety Mike Edwards. They failed to convert that to anything meaningful too.

Another thing to note, Tampa Bay ended the night with just 8 rushing yards on only five carries. The Buccaneers became easily pushed on the backfoot and they ran the ball less, they tried to pass more. Then again their rushing offense was not working that well to begin with. But passing has never been Brady’s strongest asset.

His strongest asset has always been his intelligence. It is hard to outsmart the Saint’s defense if they know what you will do next.

Arians commented on this. “Offensively, we got out of that gameplan so fast. I felt terrible for the left side of the line because there was no threat of the run,” he said. “I thought we had a really good plan for the running game, but when you go down 21-0, we tried to jumpstart it with the two-minute drive just to get something going. It just didn’t work. We got our kicked pretty good.”

Nothing was working for them.

That was the plan. “Our job was to get Tom Brady off his spot, because he throws it hot,” said Saints defensive end Cameron Jordan. “He’s still the second-greatest quarterback for a reason.”

Wide receivers Chris Godwin and WR Antonio Brown were on the field ready to bedazzle the crowd, but things were slow for the Buccaneers offense.

Tampa Bay Buccaneers just could get no luck that day.

Right now, the Tom Brady haters are crackling at what would be the worst loss of his career. Is it over for Brady? Nope, this is one match. Putting this together with the other two matches he lost, it can still be said they are still contenders.

They have weaknesses though at the quarterback and at other levels. Brady has been known for his intelligence, but he looked uncomfortable in the pocket and made some bad decisions as he made 3 interceptions.

Brady has always been faced with adversity, but that was at the beginning of his career. He being the QB that no one wanted. Now, after so many years of being a success at the New England Patriots, he is being hit with his most challenging adversity yet.

And he cannot lean on Bill Bellicheck for help either. He is the leader of the Buccaneers and has fight this on his own. How he reacts to this loss will determine his future at Tampa Bay.

Another thing to consider is that if the New Orleans Saints win the division, the Buccaneers will meet them again in the playoffs. Right now the Saints have the edge psychologically winning twice.

Drew Brees also took Brady’s all time touchdown pass by one. It is now at 561-560 in favor of Brady. Brees connected on four touchdowns on the day.

It remands to be seen if they improve before then, our bet, they won’t and the Saints will beat them again unless miracles happen.

The Buccaneers have now scheduled to host the Carolina Panthers in their next game then the Los Angeles Rams on Monday Night Football.