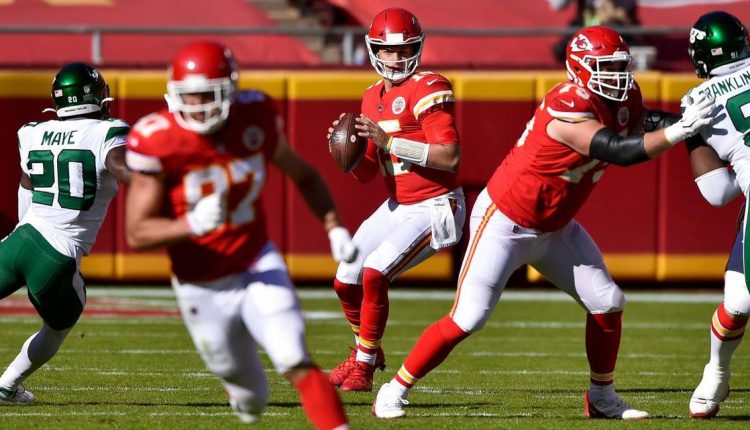 The Kansas City Chiefs have still been going strong with a few bumps here and there, but are still looking to defend their super bowl title and are good prospects to win it all.

The New York Jets take on the Kansas City Chiefs during Week 8 of the 2020 NFL season. Subscribe to NFL: http://j.mp/1L0bVBu Check out our other channels: Pa…

Last Sunday, the Kansas City Chiefs crushed the New York Jets as expected. Their record is now at 7-1. Their only loss was to the Raiders. They almost lost to the Los Angeles Chargers, but made sure to clinch the win.

A dominant season, they are definitely favorites to win the division, easily.

The question is what lies ahead for the Chiefs? Their matchups are looking in their favor. The only teams that will give them any competition are the Broncos and the Buccaneers. They will want revenge for that Raiders loss and they will get it after the bye week.

Broncos have one of the best defenses. They are the ones we can bet to stop the offensive power of the Chiefs like the Chargers did. The Buccaneers match will become a firefight, so it will be who manages the clock best.

The Chiefs are not likely to do much trading right now. They seem happy with the team they have. Fans have complained about the Raiders loss. That loss was most likely a bad day for the Chiefs against their well-known counter tactic. Which very few teams can replicate, the Chiefs know this.

Their cap is low right now and likely they want to save their draft stock for new talent. Their backups are holding up the team well. The injured players will soon return and restore the Chiefs back to a higher form.

Offensively they’ve been better this year in comparison to last year in almost all areas. The run game has improved a lot, especially with Le’Veon Bell now on the team. It should get better now. The run offense averaged 26 more yards per game.

In the Jets game, Patrick Mahomes put up over 400 yards and five touchdowns. Tommy Townsend had a great moment when he made a pass to Byron Pringle on the fake.

Tershawn Wharton played well getting a sack and has done well in other matches. The funny thing is, he was an undrafted rookie who many are wishing they did draft.

Harrison Butker is not a perfect kicker. The mistakes he makes on a frequent basis will bring his team down in a close match. Now the Chiefs rarely have close games, but that will be more likely in the post season.

He will let his team down eventually. The Chiefs should not get complacent, remember the Raiders and Chargers match?

Right now Mahomes has grown as a player. Pre-snap, post-snap reads, Reid trusts Mahomes to make the right decision when he has the option. Jets suffocated the run game maybe as a slight against Le’von Bell.

Reid spoke of Mahomes. “He was spot on today. He was seeing and shooting, and he’s very accurate with those things, seeing them I’m saying, and then his throws are good too if he pulls it. But at the same time, he’s patient with the run part of it, and he’s got a good feel of the game and what’s happening with it down-and-distance-wise, field position, all those things. So, full trust in him with it.”

The players have a full trust in him. They have a deep depth of players, except in the tightend area and even then, they do not need tight ends with such a great receiver core. The effort has to match the words. They cannot take it for granted. The moment they do, the loss will be handed to them.

“That’s what it’s going to take and I think we have the leaders in this locker room to try and make a run at it,” Mahomes said about winning the Super Bowl this season.

Clear election meddling and fraud going on in Philly