No Defense Was Needed in Browns-Bengals Shootout6 minute read 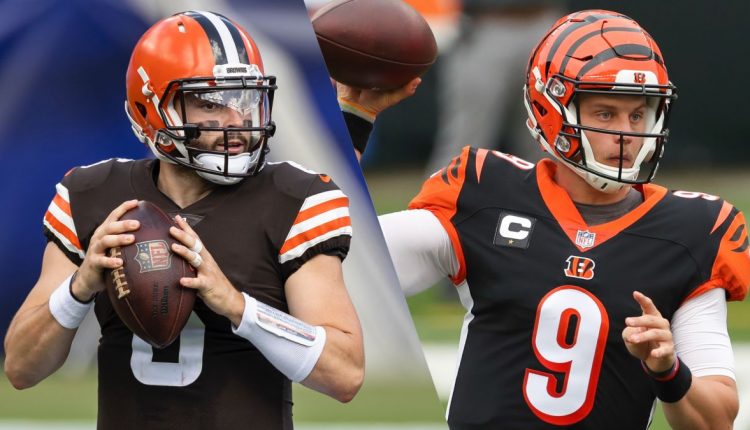 The Cleveland Browns take on the Cincinnati Bengals during Week 7 of the 2020 NFL season. Subscribe to NFL: http://j.mp/1L0bVBu Check out our other channels:…

Why The Browns Won

The Browns are slowly cutting down that deficit.

It was a thrilling back and forth match where the Cleveland Browns could have lost, but they took the one minute that the Bengals gave them and scored with a touchdown, A.J. Green got 82 yards.

The players that showed up for the Bengals on the day were Joe Burrow who racked up 406 yards, three TD and one INT, Tyler Boyd got 11 catches for 101 yards and one TD.

The players that showed up for the Browns on the day were Myles Garrett got two sacks, one forced fumble, Donovan Peoples-Jones got 3 catches for 56 yards and 1 TD, Baker Mayfield got 297 yards with 5 TDs and one INT.

The Browns struggled in the start. The Bengals defense gave them a good match at first.

Baker Mayfield meets with the media following the Browns’ 37-34 win over the Cincinnati Bengals. #PostgameAway #PressConference

Mayfield threw an interception. It was being passed to Odell Beckham Jr. To make matters worse, he got injured on the play. Anyone watching would assume they were going to lose, but the Browns showed they can push through adversity.

The Bengals could not as their defense got worse as the match went on. Baker overall was pass focused as their rushing struggled to get anything going.

The Cincinnati kept fighting Joe Burrow might have thrown a second interception because of miscommunication. He passed to Green and Green kept running while cornerback Terrence Mitchell almost caught it, but it flecked off his hand for an incomplete pass.

Burrow got the touchdown eventually on that drive. Baker responded with 13-yard completion to rookie wide receiver Donovan Peoples-Jones then a game-winning 24-yard touchdown to Peoples-Jones.

Kevin Stefanski: “As an offense, we don’t adjust our expectations regardless of who’s out there.”

Kevin Stefanski addressed the media via Zoom on October 26, 2020. Kevin discussed Sunday’s victory over the Bengals and gave an update on Odell Beckham Jr’s …

Coach Kevin Stefanski has done a good job changing the mentality of the team. He turned a losing culture into a determined winning one.

Can they build on this and make a superbowl ready team, anything is possible.

Odell Beckham, who will replace him? They have some options like Peoples-Jones, Rashard Higgins and Jarvis Landry.  They are not star receivers and they have a lot to prove until then.

The Browns still have the most cap space in the NFL, they can trade for a receiver. But it might be better to hold onto that cap space for now. The receivers they have are reliable enough and can carry the weight together.

Why The Bengals Lost

Funnily enough, the Bengals are expected to become a superbowl team in the future, but with how bad their consistency, leadership is, it is not looking so hot right now.

The offence was fine, actually even when there were many injuries in the offensive line, the backups did a okay job all the way to the end of the game. Fred Johnson and others came in and filled pretty well. The Browns defense did not do well stopping the Bengals offense. Their next match against the Titans will be more of a test for this offensive line.

The Bengals defense however started great and fizzled out like badly. They allowed 21 consecutive completions, which is a Browns franchise record. The fact that they got that against their rivals will be a sweet touch to that history.

Many are asking for the heads of the Bengals coaching staff, from Zac Taylor to Lou Anarumo and Al Golden. Here is the thing though it is unlikely to happen. The owners know they do not have the ‘best’ players. Plus this is a rebuilding phase. Because of the situation there in, it is unlikely they will be fired.

Naturally, the owners will want that coveted draft pick spot. Not sure who they might draft for though, not like they need a quarterback.  They need one great pass rusher, linebackers and better offensive linesman, you know for when they play against the best teams.

Carl Lawson, Mike Daniels and majority of the defensive line are non-factors the whole game. At least the Bengal secondary was doing well for a while, but do not worry we will get to them.

Darius Phillips had an interception which is good, he stopped being good after that. He allowed too many key completions by Baker Mayfield including the game-winning touchdown to Donovan Peoples-Jones. If only Phillips did as well as the start, I would be roasting the Browns defense.

They get a holiday today, now onto to some other culprits. Vonn Bell was not good. He is good against the run game, but lacks the talent for covering anyone in space. Maybe bring him closer to the line, since he cannot cover a soul use him as an extra man in the blitz or to attack the running back across the line.

The Pittsburgh Steelers and Tennessee Titans Duke It For Bragging Rights