O’Brien Has Been Fired, Now What Will Happen For The Houston Texans9 minute read 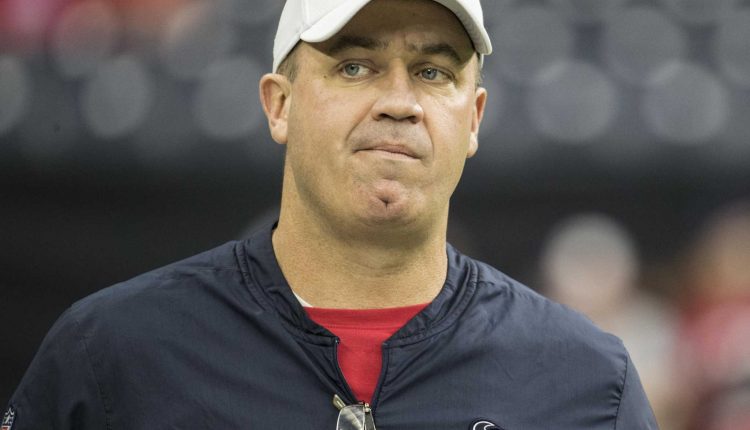 Many people wonder what is happening in Houston for the Texans since the firing of coach Bill O’Brien.

Romeo Crennel is LIVE at the Podium | Press Conference

Romeo Crennel is the interim head coach for the Texans, and he said, “I hope our attitude and energy is different,” Crennel said, via Wilson. “I hope our performance is different. You’re not going to come in and put in a new offense or defense overnight.”

Crennel is now the oldest coach in NFL history at 73 years and 115 days old. “I’m just a football coach, and I enjoy coaching,’’ Crennel told reporters this week. “That’s why I’m still coaching.’’

Crennel had coached with six different teams in the NFL since 1981. He was head coaches with the Browns and the Chiefs.

A younger head coach is still expected to take over next season.

J.J. Watt is LIVE at the Podium | Press Conference

J.J. Watt is perfectly okay with process and with Crennel taking over until then. He provided security, something they need right now. “‘RAC’ is a great man. He’s seen a lot. He’s been round a lot. He has [Super Bowl] rings, and he has a positive air about him. He has just kind of a jolly nature to him. So, you can’t really help but smile when you’re having a conversation with RAC. I’m looking forward to seeing what he can do and what he brings to our team. It should be fun.”

Anthony Weaver is LIVE at the Podium | Press Conference

Defensive coordinator, Anthony Weaver talked about changes that have occurred to the practices.

“I think structurally there were some changes in just the scheduling, which I think players were obviously excited about,” Weaver said. “But other than that, the game is the game.”

He said further. “I was a here a year ago when our GM, Brian Gaine, god bless him, I love him, a phenomenal human being, was fired in June, and this train kept moving,” Weaver said. “We had an OTA and we came to work the next day and it kept going. You see NFL means ‘not for long.’ That’s everybody.”

“At some point we’re all going to be out of here. But while we’re here, we’ve got to maximize this time and do everything we possibly can to try to win and deliver wins obviously for our fans, but also for these players. At the end of the day for me, it’s all about these players.”

But what really happened? Well, he had too much power. He was not only head coach, he was also general manager. There are few people in NFL history who have done that. The most famous example is Bill Belichick.

Unfortunately, not everyone can pull off the Bill Belichick formula, probably no one can. Bill O’Brien is another failure in that regard as he proved what everyone already knew. Bill Belichick cannot be duplicated.

Bill O’Brien with all that power then made some of the worst decisions in possible Texans coaching history and might have crippled the viability of the Texan franchise.

People might say Bill O’Brien did help them to four division titles. Right now, the Texans have the NFL’s highest payroll this year at $248m, with over $6m in the salary cap.

They have not won a game since the start of the season.

Let us look at some of those bad decisions.

Stephen A. reacts to Bill O’Brien getting fired by the Texans | First Take

O’Brien the Commander and the Chief

Duane Brown offensive tackle wanted a new deal. He was a bit polarizing, because of his vocal messaging on social issues. O’Brien then realized his mistake as Watson was constantly being sacked and pressed out of the pocket.

One thing to consider is Johnson’s huge contract, so they did not want to pay Hopkins more money, but they took on the bigger contract of David Johnson.

Even if they made the trade deal sweeter by getting some first round picks it can be said that you just do not trade away your best receivers without another one waiting in the wing or try replace them in the draft.

They brought in Brandin Cooks with a draft pick.

Brandin Cooks was to replace DeAndre Hopkins, Cooks a speedster has not done much to inspire confidence in the Texan faithful. Cooks averaged 6.6 yards per target this season. That is not a good average for a lead receiver. Actually that is the lowest in his entire career. So it can be said he made Cooks a worse player under his watch.

Now they only have four picks in the next draft, not top draft picks either. Their prospects are not good.

He may have gotten the job just 16 months ago, but he truly built something special. He turned a rather good team into a bad one not only now, but for the future.

O’Brien desired changing the culture hence the trading away of Clowney and DeAndre Hopkins. The goal was to bring in cheaper prospects that can become great players in his system. But one thing about that is you need to be good at scouting the new talent that are coming in.

O’Brien failed miserably at that.

Removing talented stars in favor of lesser players happy to become a star in a privileged system has worked at times, but only because of certain situations. You need to scout the players well, you need to ask a lot of your backups and average players, the team has not being doing that well.

Some said he should not assumed play-calling and game-planning duties ahead of the team’s game against the Vikings. To say it did not work was an understatement.

Quarterback Deshaun Watson had poor offensive line protection thanks to the ousting of Duane Brown.

He gave up so much assets to improve the offensive line which he ruined himself.

The team ranks 32 in adjusted sack rate, 29 in adjusted line rate (a measure of how far they knock the defense off the line of scrimmage in the run game) and 31st in pressure rate.

The Texans are in an terrible state. They may have a franchise quarterback, but they have minimal cap space, a sad draft future ahead, and a worse roster.

Now that franchise quarterback will soon be signed to a new deal and no money left, with the salary cap about to possibly decrease?

They had four seasons to keep JJ Watt, Hopkins and Clowney with the extra cap-room to add greater depth and push for a Superbowl. Now it is likely they will not be able to resign Watson. They will find a way, but that will likely mean a lot of other players will have to go.

Depth will be a problem going forward. Everyone wants the Chiefs’ Eric Bieniemy as the next coach. The question is would he want to take on this train wreak?

JJ Watt said after the team lost for the fourth time this season: “This is terrible. It’s brutal. I mean, it’s depressing. It sucks.”

JJ Watt has a lot to be angry about, it has been suspected and rumored that O’Brien got into an argument with J.J. Watt and defensive coordinator Anthony Weaver on the practice field.

The argument was about the failure of the team and O’Brien’s decision making since he came in.

JJ Watt was not the only one voicing their displeasure with O’Brien before he was fired. There was the move for Earl Thomas that also got pushback by the Texans players.

The ownership likely heard and likely was not happy with the fact that locker room have lost faith in their hire.

“I don’t know, I’m not going to talk about what happened at practice and what conversations were had,” Watt responded. “Right now, we have a fresh start.”