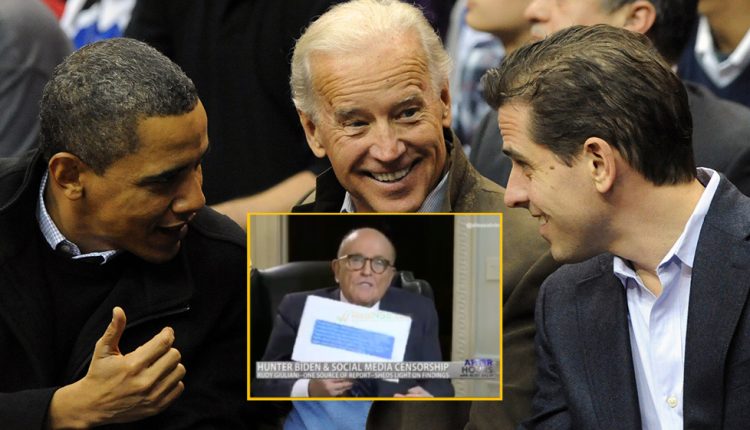 After the bombshell report by the New York Post, former NYC Mayor Rudy Giuliani went on “After Hours With Alex Salvi” on the One America News Network to reveal even more damning information. Including an email that allegedly shows an exchange between Hunter Biden and his daughter.

“This is Hunter Biden to his daughter,” Giuliani says. “He says, but I don’t receive any respect, and that’s fine I guess. Works for you, apparently. I hope you all can do what I did, and pay for everything for this entire family for thirty years. It’s really hard. But don’t worry; unlike pop, I won’t make you give me half your salary.”

Giuliani on @NYPost Biden Report:@RudyGiuliani: “I have an email that didn’t come out in the Post … This is Hunter to his daughter … ‘I hope you can do what I did and pay for this family for 30 years …

Giuliani has been at the frontline of exposing the Biden’s for their corruption. Giuliani exclusively provided all of the information that was published by the New York Post. Information that he received from a computer repair shop owner in Delaware.

The customer who brought in the water-damaged MacBook Pro for repair never paid for the service or retrieved it or a hard drive on which its contents were stored, according to the shop owner, who said he tried repeatedly to contact the client.

Although this new email between Hunter and his daughter hasn’t been verified, nor was it included in the New York Post article, it cannot be ignored. As during Hunter Biden’s time on the board of the Ukraine energy company Burisma, Joe Biden was the Vice President of The United States.

If the Joe & Hunter Biden corruption story that just broke isn’t true why won’t the Biden campaign just come out and say he never took the meeting? Why did he call a lid at 9 AM?I guess they correctly assume the media and the social media masters will just cover it up for them!

Joe Biden has said repeatedly that there was no corruption, and that he has never spoken to his son about his overseas work. All of these leaked emails prove that to be false.

CorruptBiden hid in his basement all day today trying to come up with a new lie that NYT, WP, CNN, NBC can repeat for him.So far he is silent hoping it will go away.Too many crimes even for Corrupt Media, Big Tech and Democrats party to bury.Stay tuned!

O’Brien Has Been Fired, Now What Will Happen For The Houston Texans