LeBron James Has Made History With the Lakers 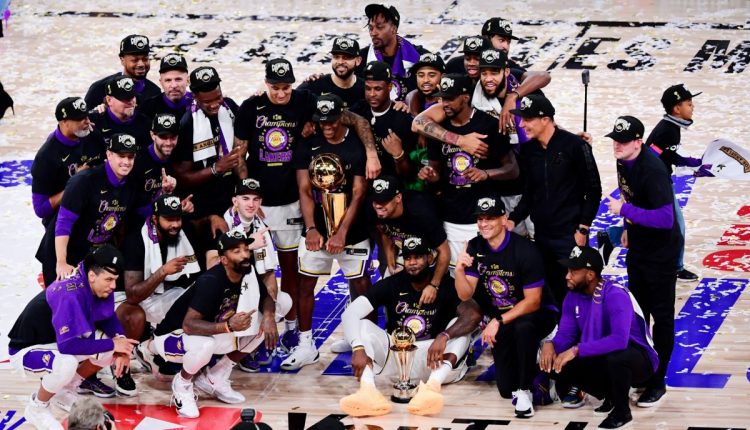 The La Lakers have won the NBA 2019-2020 Finals. Miami did not make it easy for them. That cannot be denied. Three-hundred fifty-six days from the beginning of the season, the Lakers had won. The La Lakers won 106-93 in the Game 6 on Sunday night against the Miami Heat.

LeBron James got a triple-double, 28 points, 14 rebounds and 10 assists in this match. With this win he won his fourth Finals MVP award, which we can say he deserved. He said the accomplishment had a special flavor with the Lakers.

“To be able to win with a historical franchise is something that, no matter if your mind wavers away, you can always remember what you’re doing it for.” He then recalled telling Lakers president Jeanie Buss that he “wanted to put this franchise back where it belongs.”

The Heat and the Lakers had history, but only a few times. Between 2004-2006, Shaq and Kobe competed against each other back then. But this match will be pinnacle of their history and will be what people will remember from this day going forward.

Rajon Rondo had already won a title with the Celtics in 2008, scored 19 points off the bench. Kentavious Caldwell-Pope added 17, Danny Green scored 11 and the Lakers pulled level.

Anthony Davis helped the Lakers with 19 points. James said helping Davis gain a title was a good feeling for him. Davis has been one of the NFL’s best player and naturally this is his first time playing with a genuinely good team.

“I know what it feels like to have seven years where you feel like you can’t get over the hump,” said James, who had his arms around Davis on the sideline as the final seconds ticked off the clock. “To be able to get him and we push him and let him know how great he is …. that’s what it’s all about.”

Lakers coach Frank Vogel changed the starting lineup after the fifth match loss indicating his displeasure with the way his team was playing.

He moved Davis to a different position, replaced Dwight Howard with Alex Caruso. He pretty much put out a smaller, quicker group out in this match and it worked.

The Lakers led 28-20 after the first quarter and by a larger 28 at half-time.  That lead was the second largest in NBA history, so they were giving the Heat, a ferocious burn from the beginning. The Miami Heat never recovered.

Jimmy Butler tried to carry Miami on his back. He performed very well in the last wins for the Miami Heat.

Butler spoke on the loss. “Obviously nobody likes to lose.” Butler said. “But I think we fought all year long, ups and downs, we stayed together and I think that’s what it’s all about.”

Vogel said about his team’s struggle to stop Miami Heat’s uprising late in the series. “We have a Ph.D. in adversity, I can tell you that much,” Vogel said. “We’ve been through a lot, but I’m so damn proud of this team. World champions!”

The Lakers have their 17th NBA championship. That ties them with the Celtics.

This championship was historic in many respects, not because it is their first in ten years or their 17th title. The Lakers also became the first team in league history to go undefeated when taking a lead into the fourth quarter. They went 57-0 between the regular season and the playoffs.

Their first-round matchup with the Trail Blazers was derailed by social unrest over police brutality. The Milwaukee Bucks protested by not playing and that resulted in the postponement first round for three days.

LeBron James was front and center as he led the player’s grievance and met with former president Barack Obama and the NBA leadership and how to move forward.

They also carried the strong feelings of the Laker’s faithful, for Bryant and his daughter Gianna were killed in a helicopter crash in Calabasas, California.

The Lakers never forged Bryant’s memory. It was exemplified with their special Black Mamba uniforms and huddles ending with “1-2-3, Mamba!” and breaking out special Black

Davis one-upped that when during Game 2 of the Western Conference finals, Davis hit the game winning shot at the buzzer and exclaimed “Kobe!” after the ball fell through the net.

Vanessa Bryant was thankful to the Lakers for their well wishes and respectful gestures in memory of Kobe Bryant.  She shared on social media. “Go Lakers! Congratulations Uncle P! Congratulations @lakers. Kobe was right, RP! “Stay the course – blockout the noise.” Wish Kobe and Gigi were here to see this,” accompanied by a photo of Kobe and general manager Rob Pelinka, in an Instagram story after the Lakers won the title.

Pelinka mirrored what Bryant said. “I think Kobe and Gianna have guided this team the entire year,” “Kobe’s voice is in my head. Always. Every day. Every minute. And I think to be able to, for LeBron and AD and Vogel and myself and Jeanie, for us to be able to win this championship doesn’t take away the sting of the loss. But it helps us add to their legacy. Their legacy will last forever. It will impact lives around the world in positive ways.”

Funnily enough many would have said they should not have won. As the season before the Lakers were an average team. That was James first year and he was not able to help much because of a tear in his left groin. He came back but the writing was on the wall.

They performed badly enough that president of basketball operations Magic Johnson announced his resignation near the end of the season. Then coach Luke Walton was fired. No one was sure where the team would go after that.

The Lakers hired Vogel as their coach. They finally made a serious bid to reinforce their team. They got Davis in exchange for Lonzo Ball, Brandon Ingram, Josh Hart, three first-round picks and a pick swap.

They got veterans such as Danny Green, Avery Bradley, Quinn Cook and Jared Dudley. That premium on championship experience paid back the Lakers in dividends.

The daughter of Lakers late owner Dr. Jerry Buss, Jeanie Buss had watched the game from a plexiglass-encased perch at AdventHealth Arena. She said, “You have written your own inspiring chapter in the great Laker history. And to Laker Nation, we have been through a heartbreaking tragedy with the loss of our beloved Kobe Bryant. Let this trophy serve as a reminder of when we come together, believe in each other, incredible things can happen.”

The Chiefs Were Handed Their First Humbling Lost