The Packers Solidify Their Season With Another Win4 minute read 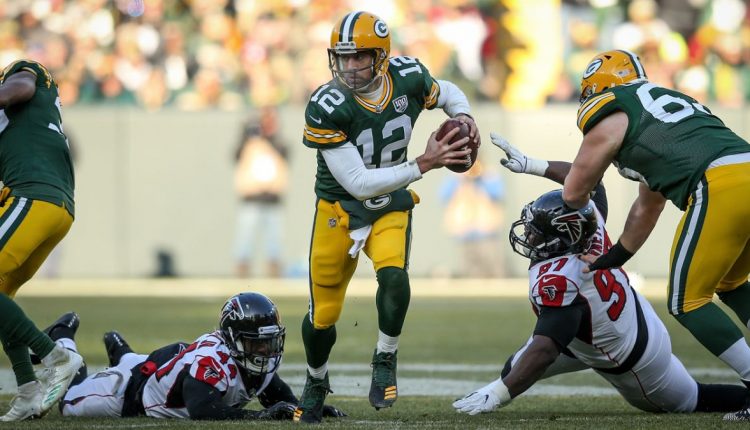 The Atlanta Falcons take on the Green Bay Packers during Week 4 of the 2020 NFL season. Subscribe to NFL: http://j.mp/1L0bVBu Check out our other channels: P…

Aaron Rodgers had a great performance against the unstable Falcons secondary.

Aaron Rodgers completed 27 of 33 passes for 327 yards and four touchdowns.

Rodgers Enjoys ‘The Pressure To Perform’

QB Aaron Rodgers spoke to the media after the Packers’ 30-16 victory over the Atlanta Falcons. Subscribe to the Packers YT Channel: https://bit.ly/32ff95H Mo…

The players that showed up for the Packers on the day were tight end Robert Tonyan he got six catches for 98 yards. Aaron Jones, whom got 111 yards in all and got a touchdown to cap it off. Jamaal Williams caught eight passes for 95 yards. Linebacker Za’Darius Smith led the Packers with three sacks.

Funnily enough they were without their main receivers Davante Adams (hamstring), Allen Lazard (core muscle) and Equanimeous St. Brown (knee). As all were injured as of play time.

In a deleted tweet, Davante Adams said, “Sorry fans and friends I wont be on the field tonight. I’ve done everything I need to do and proved Im ready but I guess I don’t know my body as well as others. Good luck out there my boys.”

Aaron Rodgers did fine to get the win with the receivers he had. Malik Taylor and Robert Tonyan, they stepped up to the task.

Atlanta struggled offensively. Receiver Julio Jones got an injured hamstring and only played half the game.

Matt Ryan talks to the media following the 30-16 loss to the Packers in Green Bay. Subscribe to the Falcons YT Channel: https://bit.ly/2RfEkAW For More Falco…

Quarterback Matt Ryan had 28 for 39 passing, 285 total yards. Running back Todd Gurley scored two touchdowns. In the end, it was not enough.

The Falcons never got a lead to squander. They were just losing the whole match.

Matt Ryan threw to receiver Calvin Ridley but he dropped the ball on third-and-6, that forced Atlanta to punt.

Green Bay took over and did not disappoint. They got a touchdown through a pass to Jones. Falcons failed to move the ball again. The Packers got it, but Atlanta forced a turnover.

Falcons got more aggressive early in the second. Ryan found Julio Jones for a 19-yard push into the red zone. Their luck ended there as Ryan’s pass to Gage in the end zone went incomplete, so they resorted to a field goal.

Packers got their second touchdown after that. The Packers got another turnover and pushed for another touchdown with a pass Malik Taylor for 20 yards.

Rodgers found Tonyan for an 8-yard run into the end zone putting them up to 20-3. They ended halftime and the Falcons came out looking for blood. They made a better drive to the end zone and Todd Gurley punched in Falcon’s first touchdown.

Green Bay got back at the Falcons’s 28-yard line and Tonyan got his third Touchdown of the night.

The Falcons got back to the Packers red zone with some help from a penalty from a packer defender.

Gurley got the second touchdown of the day with a little help from a block by Ryan.

The Falcons got the sack on Rodgers to prevent him lengthening the lead any further. They were able to stall the Packers enough to get a field goal.

Zaccheus and Christian Blake helped Falcons with their receptions to get with a chance to get another touchdown. Then the Falcon’s luck ran out, when Ryan threw to Ridley in the end zone the safety Adrian Amos  made a play and knocked it away.

Packers took over thanks to Amos. Rodgers got Tonyan for a twenty yard reception. Atlanta blew their final timeout. They got their defense together and forced a turnover. Ryan tries to pull the offense down the field. Time runs out on them though and the Packers take the win.

The Packers will be meeting San Francisco next Thursday for a rematch of last season’s NFC championship.

The Bengals Finally Win in A Exciting Match

How to watch the Vice Presidential debate tonight [STREAM LINK]