The Bengals Finally Win in A Exciting Match7 minute read 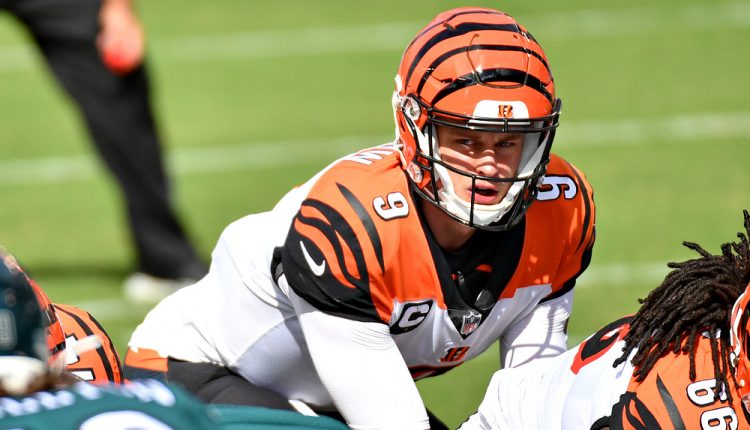 The Jacksonville Jaguars take on the Cincinnati Bengals during Week 4 of the 2020 NFL season. Subscribe to NFL: http://j.mp/1L0bVBu Check out our other chann…

Bengals got their first win against the Jaguars 33-25. The Bengals looked good as a whole for the first time this season.

The players that showed up for the Bengals on the day were Tyler Boyd and Joe Mixon.

Joe Burrow passed the ball 36 times. He racked up 300 yards and a touchdown. Burrow also made history. 300 passing yards for the third consecutive week, that had become the first rookie to achieve this.

Tyler Boyd led the receiving core with seven receptions for 90 yards. Tee Higgins had four receptions for 77 yards. He also had a catch in the back of the end zone called back because of a holding penalty.

Joe Mixon had 30 touches, 175 total yards, and three touchdowns to cap off an amazing effort on his part.

The offensive line did a better job as they protected him better. He had more time to throw and get the ball out. He had no sacks for the first time all season. Those linesmen even assisted Mixon on that long run touchdown creating a path for Mixon by knocking down any Jaguar players in Mixon’s way.

The defensive line did better as well, giving Bengals some key stops and even sacking MInshew in the fourth quarter forcing the kick.

The players that showed up for the Jaguars on the day were Laviska Shenault Jr, Mike Jack.

Laviska Shenault Jr. had a great game. He got 80 yards before he left the game due to an injury.

Watch the Bengals postgame news conference live after the Week 4 game against Jacksonville.

Head Coach Doug Marrone Meets with the Media the Day After a Week 4 Loss to the Bengals Subscribe to the Jaguars YT Channel: https://bit.ly/2zS0uDP For More …

Randy Bullock gave Bengals the lead with a kick. Then Bengals defense gave away too many defensive penalties.

D.J. Chark got the touchdown on that drive.

The Jaguars had the lead 7-3 just before the end of first quarter.

Burrow could have gained a lead, but when he threw it Sample in the end zone, Jaguar’s Myles Jack ripped the ball out of the Sample’s hand for a great clutch steal.

Second half, the Jaguars continued to battle the Bengals. After two plays, the Bengals stalled them and forced them into a field goal.

This kick from Rosas was good and put the Jaguars at a 10-3 lead just before halftime.

Burrow got another chance and took advantage. He threw for 45 yards and then passed to Joe Mixon who took it to the end zone. The extra point was good, and the Bengals tied the game at ten points.

The Jaguars for serious and threw to Shenault Jr. He caught a deep grab brought the ball to the two-yard line with six seconds to go.

Burrow kept the Jaguars on their toes. Burrow connected some passes to push the offense down the field. Mixon got a 34-yard touchdown.

The Bengals were up again, 17-13. The Bengals defense did their job. Burrow got back the ball. Mixon ran for scorching touchdown.

Now the Bengals lead 24-13. Burrow started the next drive with a 24-yard throw to Cethan Carter. The Jaguar stalled them unfortunately. Randy Bullock kicked the 40-yard field goal and it was good. The Bengals took a 27-13 lead.

Jaguar players Chark and Tyler Eifert helped Minshew drive the ball to the red zone. Rosas made the 50-yarder bringing them up to 27-16.

Burrow drove the ball up the field but resorted to a 47-yard field goal from Bullock. Now the Bengals were on a 30-16 lead.

The Jaguars did not lose hope. Minshew drove the ball up the field with urgency. Hits Chark on a slant for a touchdown, they tried a two-point conversion, but that was stopped.

The Bengals ran the ball more than usual, probably to chip away at the clock.

A mix of Mixon, Burrow, and even Alex Erickson ran the ball during the drive.

That drive ended in a field goal from Bullock and the Bengals led 33-22.

The Jaguars got down the field even quicker than before. They were down to the Bengals’ 31-yard line after only two plays. They managed the clock poorly though and the time was wasted, just like their many previous chances to win.

Rosas made a short field goal with 12 seconds left to get the score to 33-25 as compensation.

The Jaguars attempted an onside kick, but the Bengals recovered it. After Burrow kneeled to end the play, the Bengals won the game 33-25.

‘We feel a lot of momentum right now, and we’re excited about where we are. Obviously there are some things to correct, but we had a great week of practice this week, and I think that’s why we won the game,” Burrow said.

Burrow said the offensive linemen deserved some recognition for their improved play. Their play gave Mixon some space to run those long touchdown runs. “They’ve taken a lot of heat the last couple weeks, and I’m super happy for those guys to have the game they did today,” Burrow said. “They’re going to continue to build on it, I know they are.”

When asked about his rookie quarterback, Zac Taylor said. “He’s not a rookie, I don’t even think about that because it doesn’t feel like he’s a rookie and he doesn’t act like he’s a rookie. He’s in command, and guys believe in him. Those guys around him are really stepping up, and he’s becoming a real leader on this football team.”

Zac Taylor talked about them changing their strategy after half time. “We just started playing complementary football,” Taylor said. “Our offense started the half scoring, that’s a big thing for us to come out of the gate and score. And then for the defense to immediately get a stop… You get a chance to start to build that lead, that’s not something we’ve had the opportunity to do very much.”

They will now go to Baltimore next week, one of the best teams in the league.

Joe Biden does it again: has a creepy comment for some underaged girls

The Packers Solidify Their Season With Another Win