The Miami Heat Are Not Done Yet5 minute read 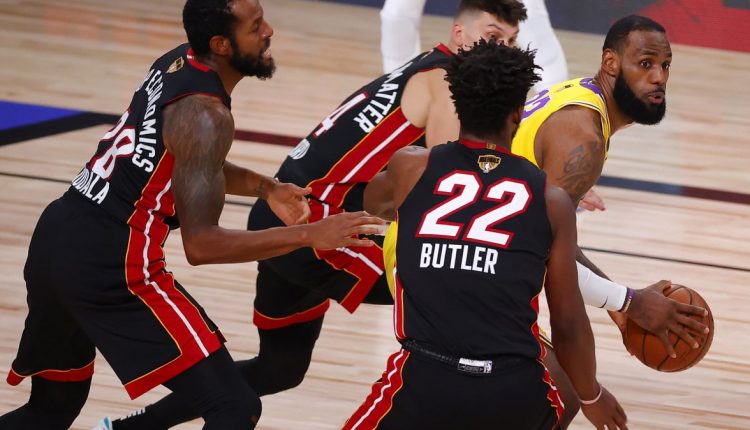 Many thought the NBA Finals were over for the Miami Heat. LeBron would win with the Lakers and that would be all she wrote.

The Miami Heat understood the situation and knew they had to win. They did, they beat the Lakers, led by Jimmy Butler. They defeated the LA Lakers 115-104.

They did this without Goran Dragic and Bam Adebayo. Miami restrained LeBron James and Anthony Davis to a combined 40 points.

The Lakers started slow. Davis fouled constantly which took him out of the game a lot, but had 15 points, five rebounds. David responded about that. “It takes away that aggressiveness on both ends of the floor that I’m used to playing with,” said Davis of the fouls. “Still have to be better and find ways to affect the game on both ends of the floor. But it definitely took me out and put a little bit too much pressure on the other guys.”

It might have led to the Laker’s lost, after all if he was on the field, he might have done more for the Lakers.

Butler player well for the Heat, as two minutes before the game’s end, he said. “They’re in trouble.” That was in response to James’ first quarter trash talk.

“I think we realised that we belong,” Butler said in a postgame interview. “They can be beat, as long as we do what we are supposed to do. Coming into the next game, I know they are going to be so much better, and we have got to be able to match that energy.”

He smiled from the beginning to the very end. LeBron might be hunted by Butler’s smile right now.

Butler finished with 40 points, 11 rebounds, and 13 assists for a great performance to lead Miami to a surprising win. He had completed triple-double in that game.

When asked after the win, Butler had this to say. “Win, I don’t care about a triple-double, I don’t care about none of that. I really don’t. “I want to win. We did that. I’m happy with the outcome.” Butler added: “I think we realized that we belong. They can be beat as long as we do what we’re supposed to do.

“Coming in next game, I know they’re (the Lakers) going to be so much better and we’ve got to be able to match that energy.”

Spoelsta replied to that by saying. “How else do you say it other than ‘Jimmy F-ing Butler’? But this is what he wanted, this is what we wanted. But it’s really hard to analyse or describe Jimmy until you actually feel him between the four lines. He is a supreme, elite competitor, and we needed him.”

Miami led originally. The Heat mostly had to prevent the Lakers from coming back.

The Lakers turned over the ball 10 times. Anthony Davis went scoreless in the opening period. The Heat went into the second half with a four-point lead thanks to Jimmy Butler. He added six rebounds, six assists and two steals then. Jae Crowder Also got in double figures with 10 points.

Bam Adebayo and Goran Dragic have injuries and it is not clear if they will ever play in this series any further.

Miami’s only hope right now is to make Butler their primary man to lead them to have any chance to win against the Lakers in the fourth round. Granted, If Butler has one bad game, then it will be lights out for the Miami Heat.

He did not step up in game 2 after all.

That is a risk they will have to take.

Regarding the Lakers, they have to do better in the next match. They know now that Butler is the player their defense needs to stop and lock down. So they can learn from this and make the best out of this for the future.

James responded to their lost. “We know that we can’t turn the ball over versus this team,” said James, “It starts with myself, being the starting point guard for the team.”

The Buffalo Bills Won Against the Las Vegas Raiders | Recap