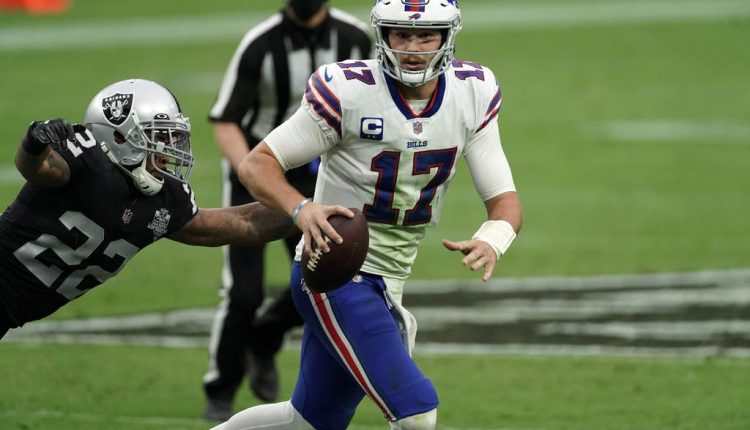 The Buffalo Bills take on the Las Vegas Raiders during Week 4 of the 2020 NFL season. Subscribe to NFL: http://j.mp/1L0bVBu Check out our other channels: Par…

The Buffalo Bills defeated Las Vegas Raiders and are kings of the AFC East.

They came out to another big lead.

The players that showed up for Bills on the day were Josh Norman, Stefom Diggs, Isaiah McKenzie and obviously Josh Allen.

Brown’s incredible 14-yard catch set up the Bills’ first score of the second half and the others did well to extend their drives and gave the Bills that big lead.

Starting CB Levi Wallace went down with an injury early in the game, so Josh Norman had to replace him. He helped the Bills’ defensive stand with a turnover.

Norman’s forced fumble occurred when the Raiders were down just six point. Three plays later, the Bills were ahead by two touchdowns. The Raiders have their selves to blame in letting that occur.

Josh Allen made a big play to Stefon Diggs for 49 yards before a Devin Singletary touchdown.

Josh Allen made one mistake though.

On one play he dropped back too much and got sacked. The Bills lost 14 yards which led to a punt.

Josh tends to not throw away a ball, the pass protection had been outstanding this entire season.

Another thing was Josh Allen got injured it happened right before halftime. Allen left the game after suffering a left shoulder injury. He returned minutes later with that shoulder wrapped. He still played throughout it all.

He will have to take it easy before the next match.

Through three games Isaiah McKenzie had six catches for 70 yards and one rush for four yards.

The players that showed up for Raiders on the day were Carr and Daniel Carlson.

Car ran for a 10 yard and another first down. Daniel Carlson kicked three field goals that included a 54-yarder in the first quarter.

The Raiders were moving the ball well, but the Bills made some clutch stops. The Raiders struggled to start their running game. Josh Jacobs rushed for only 48 yards on 15 carries.

Carr had several missed throws and some mistakes such as the interceptions. The Raiders allowed the Bills too much room especially on third down opportunities.

The Raiders tried to come back and kicked a field goal in the third quarter to trail by one, making it 17-16.

Derek Carr ran the ball to in the last two minutes. Gruden called timeout with the Raiders down two scores.

So they needed onside kick or a turnover to tie or even win the game.

Carr threw a pass, but got an incompletion in the end zone. Now on the fourth down, with the fans sweating, hoping, Agholor did not disappoint. The extra point was good and they tried an onside kick.

Bills recovered it though ending that dream.

The Miami Heat Are Not Done Yet

Trump releases first round of early endorsements for 2022 midterms

Communist China using AI to arrest people for their emotions