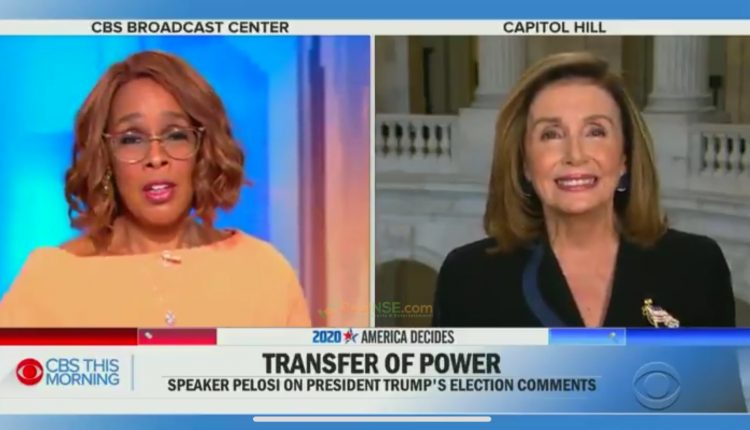 During “CBS This Morning” host Gayle King interviewed Democratic Speaker of the House Nancy Pelosi and wasn’t afraid to call her out when Pelosi referred to Trump supporters as “henchmen.”

King opened the conversation by asking Pelosi if she still feels that Biden shouldn’t debate Trump.

King: You had earlier suggested that you don’t think Biden should debate. Do you still feel that way?

Pelosi: I do, not that I don’t think he would be excellent, I just think that the President has no fidelity to fact or truth. And actually, his comments in the past few days no fidelity to the constitution of the United States. He and his henchmen are a danger with their comments – are a danger to our democracy. So I don’t want to give him – why bother – he doesn’t tell the truth. He isn’t committed to our constitution.

Gayle steps into interject: “But speaker here’s the problem. Your language to some is just as egregious as what they’re saying by calling the President’s people “henchmen.” Some can say that’s just as insulting as what they say about you.

@SpeakerPelosi on why she thinks Biden shouldn’t debate Trump: “The president has no fidelity to fact or truth, and actually in his comments the last few days, no fidelity to the Constitution … He and his henchmen are a danger with their comments, are a danger to our democracy” pic.twitter.com/xWso2rYcpR

Throwing babies and dancing is a new disturbing TikTok trend