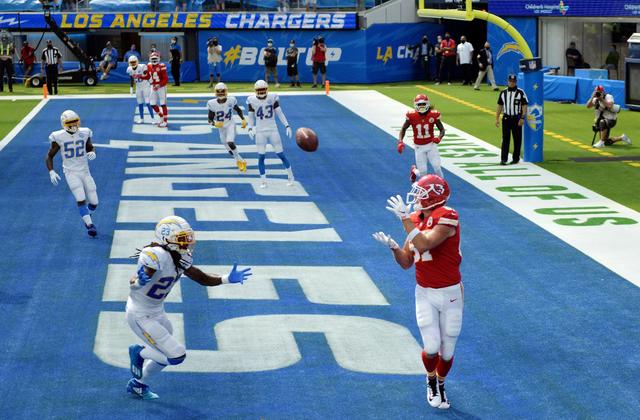 The Kansas City Chiefs claimed victory on Sunday by beating their rival the Los Angeles Chargers.

The players that showed up for Chiefs on the day were Harrison Butker nailing a 58-yard field goal to spoil an otherwise exciting debut for L.A.’s Justin Herbert.

On a sidenote, betting is not known for making the rounds in the news. This news might, 94 percent of betting tickets on the Chiefs covered the game’s 8.5-point spread.

97 percent of the money wagered on that went in favor of the Chiefs winning by at least nine points. We already know they won in a clutch hard won victory that did not satisfy those perimeters. So many people lost that bet.

This indicates an interesting fact. Almost no one expected the Chargers to put up such a fight.

The rookie quarterback Herbert did well coming within four points of upsetting the reigning Super Bowl champions. The Kansas City Chiefs were suffocated on single-digit points going into the fourth quarter. The chiefs were trailing 14-6 at halftime to be more accurate.

The Los Angeles Chargers proved it is possible. Mahomes had 126 yards by the start of the fourth quarter, while rookie quarterback Justin Herbert had 273.

The Chiefs came roaring back though as they won 23-20 in overtime.

Kansas City tied it with a field goal and Harrison Butker finished it.

How did the Chargers stall the Chiefs?

Joey Bosa and Melvin Ingram did their part excellently. Before that point, the Chargers rarely blitzed and pressured Mahomes often.

It was the efforts from the defensive line. The Chargers are one of the few teams that can have success against the Chiefs playing that style. They have good cornerbacks who can cover well.

They started to find some room in the fourth quarter. Mahomes made a phenomenal throw to Hill for a 54-yard touchdown. That was the Chiefs offense we’re used to seeing.

Even though the Chiefs got going eventually, it’s still an accomplishment to keep them down for three quarters. Chargers can put down their name in the running to be a top competitor to play against.

The other way to keep the Chiefs from scoring is to hold the ball. The Chargers tried to do that in an effort to run out the clock. They got a field goal at the end of their long drawn out efforts.

The time was 2:20, the chiefs were sweating, but they thrive in situations like this.

He picked up 27 quick yards on throws to Travis Kelce and Hill. Then Mahomes did what Mahomes does best, a 21-yard scramble out of the pocket.

It has been said the coach Andy Reid manages time like he manages his weight, badly. The Chiefs ran out of time to get the touchdown. They kicked field goal with three seconds left.

The Chargers didn’t get a first down to start overtime, and punted instead of going for it. They regretted that. The Chiefs drove into Chargers territory finished the job.

“Bongino Report” gaining visitors while “Drudge Report” is on way out

Trump to designate KKK and Antifa as terrorist organizations